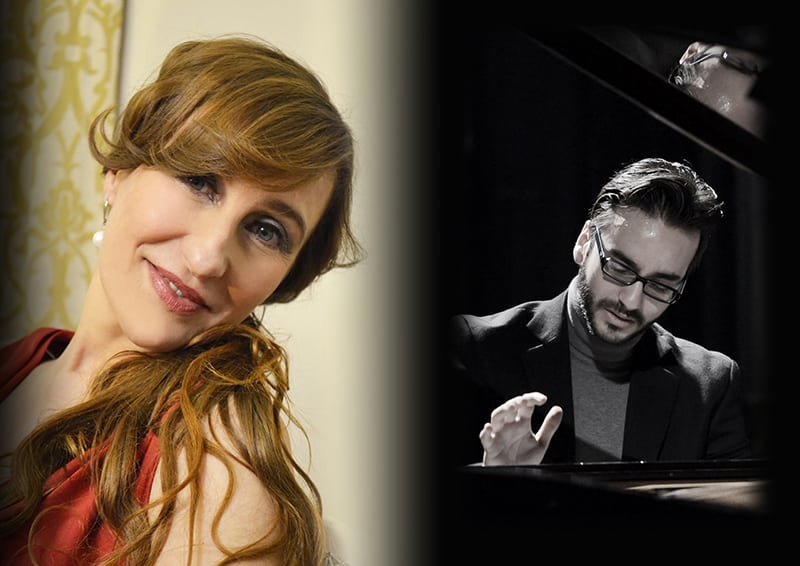 The Pharos Arts Foundation culminates its 2017 season with the renowned Italian soprano Alda Caiello and pianist Andre Gallo in a recital with 20th century masterpieces, inspired by the folk music of various traditions on Tuesday in Nicosia.

Caiello is regarded as one of the leading vocal performers on the European scene and celebrated for her versatility, refinement and expressiveness. She is a graduate of the Perugia Conservatory of Music and her discography includes two CDs on Casella, Respighi, Pizzetti and Ghedini (on Bottega Discantica label), a CD with the complete songs of Luigi Dellapiccola (Brilliant Classics label), a recording of Bruno Maderna’s Liriche su Verlaine (Stradivarius label), and a recording of Fabio Vacchi’s original music for Ermanno Olmi’s film Cantando dietro i Paraventi (BMG/Ricordi).

She has appeared in prestigious venues, including Milan’s Teatro alla Scala, Venice’s La Fenice and London’s Wigmore Hall. She has performed under the baton of Luciano Berio, who considered her his favourite singer for his Folk Songs, as well as that of Valery Gergiev and others. Her impressive repertoire includes the leading roles in Bruno Maderna’s chamber opera Satyricon, Emilio Scogna’s opera Anton, Sciarrino’s Perseo e Andromeda and Luca Mosca’s Signor Goldoni, among others. She has also appeared as a soloist with world renowned ensembles and orchestras.

Gallo has been described by the famous English piano scholar Bryce Morrison, as “a masterly pianist with a bold and intriguing personality”. He studied with maestro Franco Scala at the prestigious International Piano Academy “Incontri col Maestro” in Imola, and he has appeared in recitals all over the world, in notable venues such as Konzerthaus Berlin, Hamburg Laeiszhalle, Teatro La Fenice and Teatro Olimpico in Venice and the Steinway Hall in London.

The pianist has appeared as a soloist with important orchestras, including the Mozart Orchestra, the North Czech Philharmonic Orchestra and the Teatro Comunale Orchestra. He is regularly invited by eminent festivals and concert series such as the Festival dei Due Mondi in Spoleto, Festival “MiTo” Milano-Torino, Al Bustan Festival in Beirut, GOG Giovine Orchestra Genovese and Paul Sacher Foundation and BauArt Festival in Basel.

In his repertoire, ranging from classical to contemporary, Gallo has demonstrated particular interest in the French composers of the 20th century, and he has performed the complete piano works of Ravel, Poulenc, Debussy and Satie. He was awarded the 2006 Galarte Prize in Music, conferred under the auspices of the president of the Italian Republic. In 2008, he was appointed fellow of the Association Bayreuth Richard Wagner Venice. He is a guest professor at the prestigious Zuyd University of Applied Sciences in Maastricht, lecturer at the International Piano Academy “Incontri col Maestro” in Imola, and Director of the Imola Piano Academy – Talent Development in Eindhoven.

Tuesday’s performance will range from Sibelius’ Karelian-induced songs to the Ancient Greek eroticism of Debussy’s Bilitis songs, which were inspired by the famed courtesan from Cyprus and disciple of Sappho; from the dark Cuban sensuality of Montsalvatge’s Canciones negras through the Andalusian passion of de Falla’s Canciones Populares Espanolas, to Berio’s highly virtuosic Four Folk Songs. The recital is certain to be a unique experience.

The recital is supported by the Embassy of Italy in Cyprus.