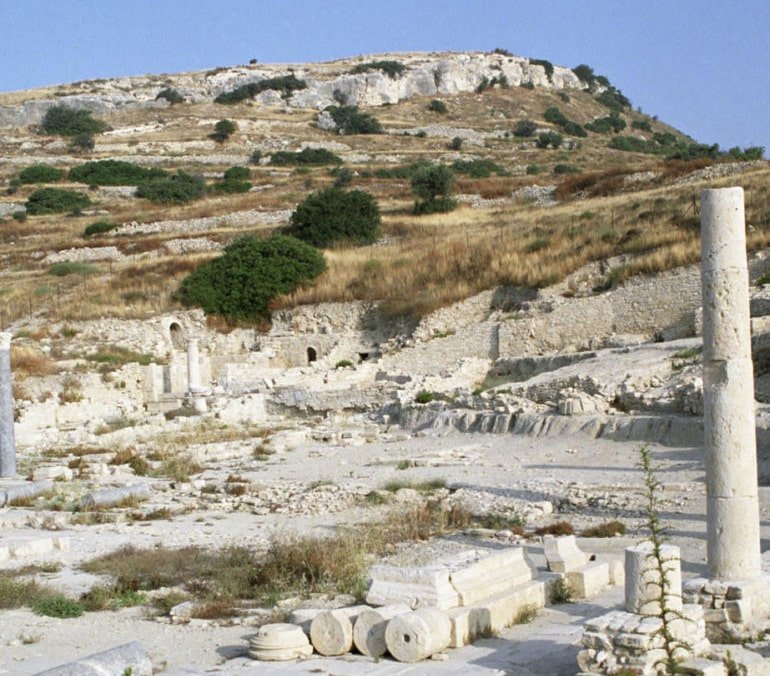 Temple of Aphrodite at Amathus

Where the ancient ruins of Amathus lie in Limassol, there stems a land dispute over compensation dating back so long that sons have grown up and taken over the fight from their fathers.

Some 300 families were affected when the Amathus area was designated an archaeological site in 1964, head of the property owners group Takis Onisiforou told the Sunday Mail.

In the last nearly 50 years owners have staged protest after protest over the amount of compensation they were offered and criticised laws they say have not been applied equally. The most recent was at the House of Representatives last week

Even though expropriations began, there were two major problems, he claims.

Firstly, the process was incredibly slow with only one or two pieces of land getting expropriated every year to date and secondly, that the compensation land owners received was “peanuts”.

Curator at the department of antiquities George Filotheou told the Sunday Mail however that statements over expropriations taking too long are mostly because land owners took the case to court because they were not satisfied with the offer made by the state.

Owners are allowed to object to a compensation offer and take legal action if they do not agree with the amount on offer.

“The building coefficient is zero per cent in an area that’s right next to the beach. For a piece of land with a value today of two to three million, they offer €50,000.”

More so, he charged that “we can’t build on our land because we’re supposedly protecting an ancient site but the big hotels in the area were somehow allowed. “If the law should apply, it should apply for everyone. But our state doesn’t care about culture.”

The Amathus area is an archaeological site containing the remnants of one of the island’s most ancient towns.

Dating back to at least 1100 BC, it is linked to the cult of Aphrodite with the site containing a temple, tombs, and public baths used at the time.

Onisiforou argues that in the 1980s, when interest began in building hotels in Limassol, the state moved to minimise the area decreed as an archaeological site to legally allow hotel construction.

“Last week when we were in parliament, even MPs said that this is one of the biggest hushed up scandals and no government has ever dared to touch it,” he said.

“I have asked the auditor-general to investigate the matter but nothing yet. We want to arrange a meeting with him again to see what’s happening.”

Of the original 600 donums of land that affected the 300 families (or 1,000 people) there are now about 80 donums left concerning about 40 families whose land has still not been expropriated, MPs heard during the House interior committee last week. In the meantime, owners can do nothing with their property.

These are 37 items of land and the state has made available €6 million to go towards compensation for their expropriation, Filotheou said.

The owners however argue that the combined value of the property is closer to €16 million.

Asked if he believes anything will change, Onisiforou laughs and says “I’ve been doing this for 24 years. Before that it was my father that was running after everything. It’s been discussed in parliament 13 times. This is the stupidity that is called a state.”

During Akel’s time in power with former President Demetris Christofias, the land owners were promised a 10 per cent land building coefficient that could be used on another piece of land, on top of the current coefficient in place.

“When (current President) Nicos Anastasiades came into government, they took it back.”

Filotheou said the proposal was deemed unconstitutional and could not be applied, though it served to be the only glimmer of hope the land owners had in decades.

“We offered three options. Either compensation that accurately reflects the value of our items, to be given state owned land in another area or (applying Akel’s idea) getting an additional 10 per cent building coefficient on another piece of land we own,” Onisiforou said.

None of them seem to be likely to be implemented in the way the land owners wish them to however Onisiforou is positive that “with pressure from society and people on our side, we will see a change”.

“I am a teacher and when my students saw me on TV telling MPs everything to their face, they told me well done and the deputies deserved it.”

If young people are encouraging then it is a sign that no government will ever get any respite over the matter, Onisiforou said.

“Perhaps we should take a leaf out of the archbishop’s book,” he added, referring to Archbishop Chrysostomos’ threat to the antiquities department in October that he himself would drive into church-owned land in Yeroskipou with a bulldozer to clear the area of department staff who were digging for antiquities.

This was because he was expecting an investor to whom he could lease the plot to and argued the antiquities department had broken the law because it had apparently designated the land as a class B archaeological site without asking for permission.

The Cabinet consequently decided to overrule the department and removed the land classification as a class B archaeological site.

“The law works differently depending on how much money you have in this country,” Onisiforou said.

Brexit will not be derailed, says UK’s May ahead of crunch cabinet meetings