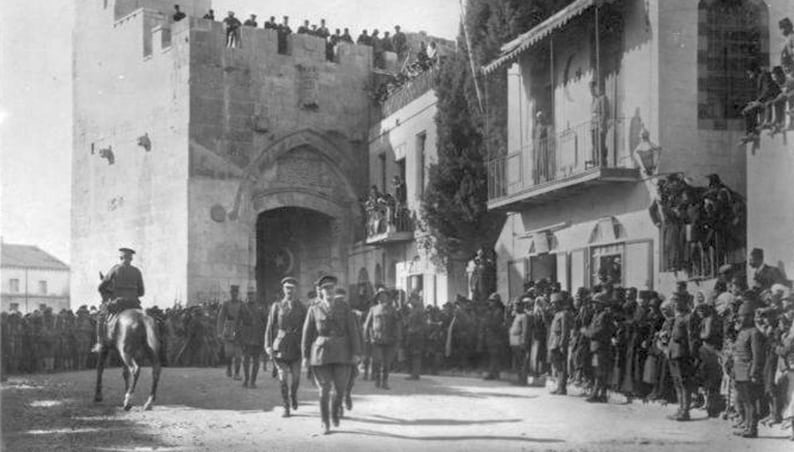 In those days you travelled by ship from Limassol to Venice and then by train and ferry to Dover and vice versa. We sailed out on the Theodor Herzl and back on her sister ship Jerusalem both of the Zim Israel Navigation Company – a shipping company set up originally to facilitate the migration of Jewish people to Israel.

Theodor Herzl, the person, is regarded as the father of Israel. Not quite an Ataturk, he nevertheless championed Jewish immigration to Ottoman Palestine and the creation of a Jewish homeland, that led to the Balfour Declaration of November 2, 1917 – five days after the British defeated the Ottomans at Beersheba and before the capture of Jerusalem on December 11, 1917 – and eventually the state of Israel in 1948.

The centenary of all these events was celebrated recently in Israel with the descendants of General Allenby who captured Jerusalem in 1917, an advance recorded for posterity in a photograph of Allenby as he enters the city with TE Lawrence in the background.

Lawrence championed the cause of Arab nationhood and was very disappointed at the turn of events because Allenby’s victories were won with the assistance of Bedouin tribesmen whom he rallied to the British cause, immortalised by Peter O’Toole and Omar Sharif in the film Lawrence of Arabia. Lawrence thought the British duplicitous – they promised Arab nationhood while promoting the creation of the state of Israel – and it broke his heart.

To many Jewish people Jerusalem is a symbol of the return to the promised land. The City of Jerusalem itself, however, is not so much a capital as an ideal in the mould of William Blake’s memorable poem Jerusalem set to music by Hubert Parry and often sung as the English national anthem. As always with symbols they mean different things to different people.

‘I shall not cease from mental fight nor shall my sword sleep in my hand til we have built Jerusalem on England’s green and pleasant land’ is about a socialist ideal. If the truth be told the Israelis who founded Israel – men like David Ben Gurion and women like Golda Meyer – did indeed build a new Jerusalem in Israel after they were nearly wiped out as a people by European intolerance and persecution.

The trouble is they built their Jerusalem on Palestinian land and the issue has been how to share the land between the two peoples in exchange for peace. The City of Jerusalem itself was not necessary to the creation of the state of Israel. The UN resolution that was passed by the UN General Assembly in 1947 – but not implemented – provided an international status under UN trusteeship to be accorded to the City of Jerusalem and guaranteeing access to the Holy Shrines of all three Abrahamic faiths.

Ben Gurion, Israel’s first prime minister, accepted that the City of Jerusalem was a step too far and was content with UN trusteeship. His Jerusalem was Israel herself. Alas the 1947 UN plan for the creation of two states – Israel and Palestine – was rejected by the Arab world and we have not moved one iota forward in the creation of a Palestinian State since.

Along then comes President Donald Trump, a loud American with absolutely no understanding or experience of the region to put his big foot right in it by purporting to recognise Jerusalem as Israel’s capital, motivated by shallow understanding and low calculation. It is not only Greeks you must beware when bearing gifts, it is also loud Americans like Trump, and I am surprised the Israelis did not look this gift horse in the mouth and say thanks but no thanks.

The founders of Israel as a Jewish homeland would have seen through the racist in Trump and rejected the gift as a poisoned chalice. They would have realised that few countries would follow suit and show Israel up as alone and unwanted. Besides Jerusalem has symbolism for Jews, Muslims and Christians, and the gift may have been offered to please the Evangelical fundamentalists of Bible Belt America who support Israel for reasons which many Jews would find perverse – the return of Jerusalem to the Jewish people to await the second coming of Christ.

I know a bit about the Evangelists as I went to the American Academy in Larnaca which back in the 1960s was very evangelical. We had scripture, prayers and ethics every day of every academic year for seven years. It was a great school and no one seemed to mind its proselytising ethos because it was well intentioned and harmless. But the Evangelists of today are mostly right-wing fundamentalist bigots of the kind that voted Trump to power.

So unlike President Recep Tayep Erdogan of Turkey, I do not blame the Israelis on the thorny issue of Jerusalem, since it was Trump who recognised it as the capital of Israel and, adding insult to injury, told the Palestinians that this was to further peace in the Middle East. Peace my foot!

So far as the Israelis are concerned they were minding their own business when all of a sudden along comes Trump and hands them Jerusalem on a plate – probably in order to rally the evangelical right in the Alabama election to the Senate. What to do? It was a classic moral dilemma and they seemingly chose to accept the gift.

As it happens Trump’s candidate got his comeuppance. Alabama went democrat and reduced the Republican majority in the Senate virtually to vanishing point. But who will pick up the pieces in the Middle East and when will the Americans get rid of this loud-mouthed fool at the White House?

It was said of Ottoman Constantinople at the time of Suleiman the Magnificent that ‘the site of the city was created by nature for the capital of the world.’ Yet despite its magnificent location, Kemal Ataturk renamed it Istanbul, turned Hagia Sofia from a mosque into a museum and moved Turkey’s capital to Ankara, as a goodwill gesture to the Orthodox Christians.

Constantinople was named after Constantine, who converted to Christianity and turned it from a sect into one of the world’s great religions. But it is Jerusalem not Constantinople that is God’s capital on Earth and as such it belongs to all faiths.

Time was when American presidents had Ataturk’s vision or the idealism of a Woodrow Wilson or the wisdom of a Theodore Roosevelt. Instead we have this caricature of a president called Trump with his finger on the nuclear button. What have you done America?

The BBF remains our only hope for a solution