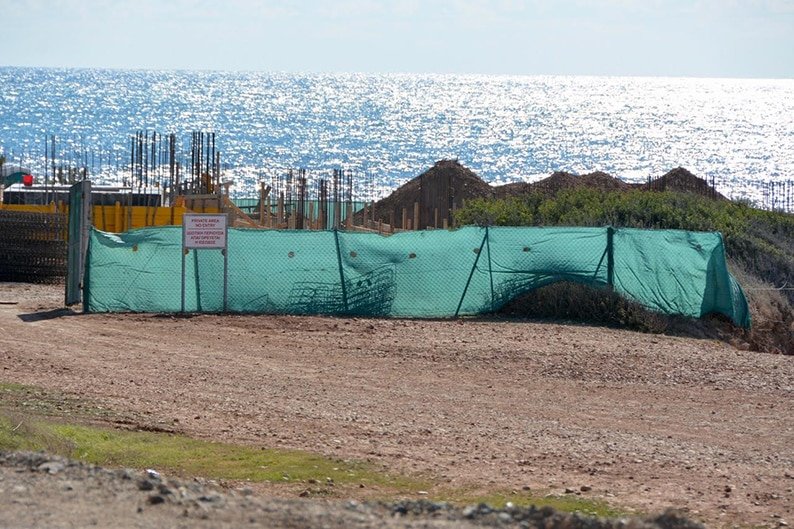 Recent construction above the sea caves

A PROPOSED development of six luxury residencies in the stunning and environmentally sensitive sea caves area in Peyia in Paphos has infuriated many in the village who fear it heralds a new wave of destructive coastal construction.

“The villas are right on the seafront in an area where erosion is terrible and one of the floors will be underground, so they are excavating right above the sea caves. It’s an atrocity,” local councillor Linda Leblanc told the Sunday Mail.

The luxury homes have all the necessary permits to go ahead, said Leblanc, but questioned how the area was rezoned as suitable for building back in 2000 and why it hadn’t been rezoned as a ‘no build’ zone in the meantime.

The project was given the green light by the Paphos planning department, so in accordance with the law, Peyia is obliged to grant the necessary permits, she said.

“This is an example of how wrong things are in Cyprus and how private interests are served. Legislation is not on our side as a local authority and we are limited as to what we can do in such instances,” she said.

Klitos Papastylianou, of the Initiative for the Protection of the Natural Coastline, said that the six-villa plot is adjacent to the Natura 2000 areas ‘Site of Community Interest’ and ‘Special Protection Area’, the Akamas Peninsula.

He said that it is also an extremely important habitat as it is adjacent to the submerged or partially submerged sea caves. The area is the birthing habitat of the Mediterranean Monk Seal (Monachus monachus), which is listed as the most “critically endangered” marine mammal species in the Mediterranean by the International Union for the Conservation of Nature (IUCN)

“In addition, due to rainfall during this period, soil from the excavation ended up in the sea, right in front of the sea caves.”

According to the relevant habitat directives, there should be an appropriate assessment of the project’s implications and objectives. However, Papastylianou said that the Preliminary Environmental Impact Assessment (PEIA) submitted does not even use the words ‘sea caves’ or ‘Mediterranean Monk Seal’.

“The environment department issued authorisation without even examining the assessment with the EIA committee. In our view, the project has significant direct impacts on the area, including the degradation of the natural habitat and the disturbance of a priority species,” he said.

According to the developer’s initial brochure, the ‘prime location’ project was for ‘one, two or three’ exclusive luxury villas set on the water’s edge with landscaped gardens and Greek island style architecture. ‘Quality and ambiance are in every corner of this eclectic location,’ it said.

However, Leblanc confirmed that the planning permits were actually granted for six residencies.

“This project will also include parking for eight vehicles, six swimming pools and a sewerage system,” she said.

Leblanc said that although the council’s hands were tied over approval of the project, they insisted that a biological waste station is installed to service the six homes.

The brochure adds that “This unique plot is situated right on the seafront on the beautiful area of Sea Caves. It is only minutes away from the National Nature Park of Akamas and five minutes’ drive to Coral Bay.”

No guide prices are given for the villas, but it’s believed they each come with a two million euro price tag and have been sold to Russian investors.

The developer was also in hot water with Peyia council in October, when it blocked off public access to the sea, due to ongoing works at the site. They have also been asked to move huge mounds of earth, building materials and machinery from the site, which is not permitted, and are on top of the sea caves below, said Leblanc.

Local resident Yeng Chow said that a number of destructive coastal developments have sprung up and ruined a once beautiful and unspoiled area, the six villas being the latest addition. Apart from the destruction of the countryside, Chow also questioned who is purchasing these homes.

“These houses are on a cliff above the sea caves. I wouldn’t want to live there. What about erosion or if there is an earthquake?” he said.

Another local resident, a regular rambler who wished to remain unnamed, said: “This is a real disaster and it’s very upsetting to see new developments and villas popping up everywhere all over this lovely space. The natural beauty is disappearing.”

Papastylianou said that within Peyia’s local plan, a Strategic Environmental Assessment (SEA) along with an appropriate assessment should be undertaken to investigate the existing cumulative impact of development projects in the wider area.

In fact, according to the Mediterranean action plan of the United Nations Environment Programme, the protection zone of the nesting habitats of the Mediterranean monk seal should be even larger, reaching 500 metres from birthing caves.

Earlier in the year, the House interior affairs committee said that despite repeated appeals to the government, a study into the integrated management of coastal zones has yet to be concluded. This effectively means that currently coastal areas may be developed, to the detriment of beachgoers.

The ratification of the Barcelona Convention for the Protection of the Marine Environment and the Coastal Region of the Mediterranean was adopted in 1995 and Cyprus is a contracting party.

Once finally ratified, it will set out strict conditions for maritime interventions that must take into account the protection of areas of ecological and landscape interest and the rational use of natural resources.

According to a past report by the auditor-general, there is a total lack of coordinated management when it comes to the island’s beaches, a lack of oversight by local authorities, a lack of environmental policies, and unchecked development.

“Even the famous sea caves are not safe from development and there’s a lot more coming, it will only get worse,” said Leblanc. “All we can do is keep fighting within the limits of the law. Look at what we’ve lost in the last twenty years.”

Adding insult to injury in Palestine

The bloody road to nation-building and Cyprus