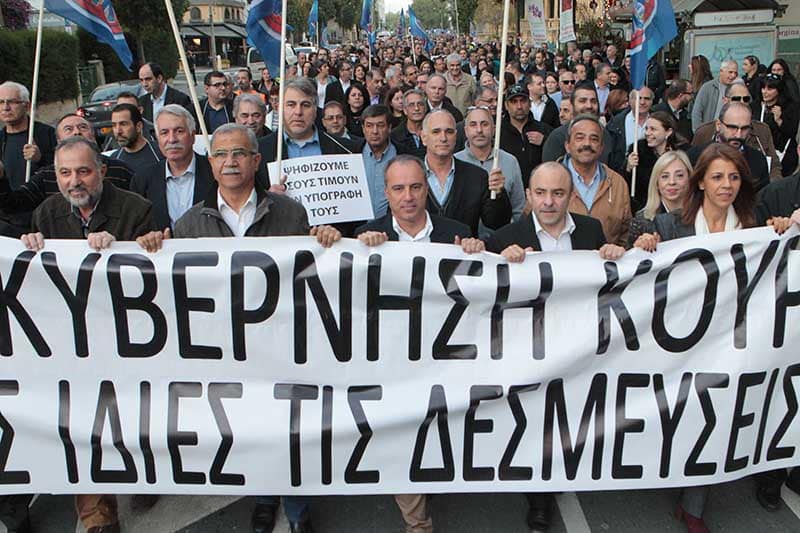 Out in force: bankers demonstrating on Tuesday

THERE is no country in the world apart from Kyproulla in which workers on annual salaries of 50, 60 and 100 grand, who have free healthcare, are entitled to low interest loans, work until 3pm and receive retirement bonuses of hundreds of thousands of euro go on street protests with money demands.

Our basket-case midget country is unique in this respect as we saw on Tuesday afternoon when a mob of hundreds of grossly overpaid smartly-dressed bank employees marched to the presidential palace to protest against the government’s decision not to fully cover the losses of their provident fund in the haircut of deposits.

So far the taxpayer has paid close to half a billion euro to cover provident fund losses and the government re-imbursement scheme has placed a ceiling of €250,000 per person, raised from €100,000 announced in July. The bank employees were protesting because 190 colleagues earning top bucks were entitled to a much bigger amount, some twice as high.

You would think the country’s highest paid workers, none of whom lost their job in the 2013 meltdown caused by the banks that employed them – in contrast to tens of thousands lowly-paid workers who were thrown into poverty – would have felt a bit embarrassed to go out on the streets posing as downtrodden impoverished labourers and victims of social injustice.

THE WORK stoppage and march was not only aimed at raising the €250,000 ceiling on provident fund payments for 190 bankers. It was also a show of strength by the bullies running Etyk, directed at the B of C chief executive John Hourican, who has set the lowering of bank labour costs as a priority.

The B of C informed its staff that it will introduce a new salary regime that will ‘pin down earnings’ of most workers and drastically cut promotion prospects with the aim of cutting its wage bill by 20 per cent, claimed Etyk. This would bring an end to the guaranteed whopping annual pay rises and obligatory promotions imposed by the union on the weak management of the banks many years ago. Banks have cleaners on two grand a month and messengers on four grand thanks to their socialist salary scheme.

Hourican has craftily offered to cover the losses of the provident fund on condition that Etyk agrees to the new salary regime he was proposing. Of course the union will hear nothing of it, insisting the taxpayer picks up the bill because the government had undertaken the obligation to do so in 2013. It said it “has made it clear that it cannot accept a government commitment being turned into a Bank of Cyprus bargaining chip.”

The taxpayer will have to pick up the bill it has no obligation to pay and pay it in full to safeguard the extortionate wages of bank employees. Only then, will there be social justice.

UNDERPAYMENT of the provident fund and attempts to lower salaries are not the only grievances Etyk has. Last month it issued a circular showing its socialist beliefs and slamming the “extreme tendencies brought from abroad” which led to the “oppression of colleagues in the hunt for profit by the management of the banks.”

The union said the hunt for profit was affecting the health of colleagues. “Through these behaviours they are ‘drowning’ many colleagues in anxiety, stress, pressure, extremely long working hours that are catastrophic for the mental and physical health of bank employees,” Etyk said, before reaching the following medical conclusion:
“As a consequence of all the above is the creation of psychological problems and physical health problems that often lead to the need of the necessary medical support as well as to heart and brain problems.” It urged colleagues not work too hard and “to remember that above everything is the person and our fellow human beings, our HEALTH, our family and our dignity… Nobody deserves to lose their health, ruin their life or the life of their children for the sake of a promotion.”

The union expressed the hope all colleagues understood this so “we do not later mourn on the ruins of personal or family catastrophe.” The only issue Etyk failed to address in its impassioned plea for low productivity was how the colleagues would have a highly-paid job if the banks gave up the despicable hunt for profit.

THE GREEN populist Perdikis was inconsolable after hearing that four of the five bankers accused among other things of market manipulation and misleading shareholders had been cleared by the criminal court. The rabble-rouser was incensed that only the former CEO of the B of C Andreas Eliades was found guilty on only one charge while two board members and two senior executives walked free.

Speaking on Trito on Friday morning, Perdikis admitted he was upset with the ruling and “with ourselves for trusting institutions like the justice system.” The justice system had failed us, he said before turning into the spokesman of society, which he claimed “cannot accept what is happening.” Another crime will go unpunished, he said.

You have to be a special kind of idiot to think the economic catastrophe was caused by five bankers allegedly misleading the B of C AGM in June 2012. The catastrophe had already arrived by then.

I HATE to say this, but Perdikis may have had a point in claiming on the same show that the unit investigating the collapse of the economy was under-resourced and that the state had not made enough money available to hire expert help. I am not sure there would have been a different verdict by the judge but there is little doubt that the court battle was stupendously unequal.

The six defendants – the bank was also charged – each had a top lawyer representing them and each one had a team of lawyers supporting them. They would have been paid top bucks for their work plus a hefty success fee thrown into the deal. The prosecution was a lawyer from the attorney-general’s office, with little support, on a monthly salary and no cash incentive for a successful prosecution. The big-shot defence lawyers would not go to court for the money the prosecutor received as a monthly salary.

Without doubting the commitment or professionalism of the prosecutor, you have to say that she did not have a tiny fraction of the incentive to win that her opponents had. She did not even have the incentive of her colleague Eleni Loizidou who gave her all for the personal satisfaction of helping Mother Russia’s prosecutor-general imprison the political enemies of the Putin regime.

The reality is that the state prosecutor went to the court-room armed with a pistol to confront six big-shot lawyers armed with ballistic missiles and hell-bent on earning maximum moolah from the case. In these David and Goliath circumstances, it was a colossal success that she made one charge stick to two defendants considering she would not even receive any praise from the Russian prosecutor.

SPEAKING of mother Russia, our foreign minister Ioannis Kasoulides has written to the legislature to inform it that Kyproulla supports the lifting of the EU sanctions imposed after the annexation of Crimea. The letter, in response to a question of the Russia-worshipping rabble-rouser Perdikis and published by Mother Russia’s official cheerleader Phil, said Kyproulla would raise for discussion the lifting of the sanctions when conditions were right.

Kasoulides also implied the “the government consented to the sanctions with a heavy heart,” reported Phil.
The foreign minister cited a pathetically lame excuse for opposing the sanctions. He said Kyproulla was against sanctions because “it always believed they would be ineffective,” but “gave its consent for their imposition as an act of solidarity with member states that felt their security was at risk after the events in the Ukraine.”

How wrong I was in thinking we opposed sanctions because our government, like our attorney-general’s office, always wants to please Moscow. As for Kasoulides’ excuse it could upset Moscow because it implies that we would have fully supported the sanctions if we believed they would be effective, that is, caused maximum hardship to Russia.

BAD NEWS for the presidential candidates was reported by Phil, which has become the official mouthpiece of auditor-general, investigator-general and moral avenger Odysseas. Odysseas, who leaks all his reports to Phil, on Saturday gave the paper an opinion he received from AG Costas Clerides about the campaign spending of the candidates, which the moral avenger has decided to monitor.

According to Clerides, the total spending should not exceed a million euro. Candidates had been under the impression that the limit applied only to their personal campaign spending, while the parties supporting them could spend more money on their behalf. The AG did not address the most important issue of all – Prez Nik has spent tens of millions of euro in handouts and on projects we do not need to buy votes in the last six months. Is there no limit to how much a candidate can spend when the money he is using for his election comes from the taxpayer?

WHAT about the covert campaigning carried out by Junior’s fabulously wealthy and generous mum Fotini. Mrs Papadopoulou, who has always been involved in charity work, has significantly increased her donations to charities and organisations helping people in need. While this is commendable, shouldn’t Odysseas investigate this covert campaigning for her son? People who benefit from her charity would most likely vote for Junior as a show of gratitude.

On Saturday the Tamasos Bishopric and its association of ladies held a big event at Trikkis hall in Anthoupolis to honour with the Grand Cross of Ayios Erakilidios the President of the Red Cross, Mrs Fotini Papadopoulou “for her contribution to society and her charity work at the bishopric.” Maybe Odysseas will turn a blind eye to the covert campaigning as people in need are benefiting from it.

THE DAUPHIN of the House of Strakka, in the Grand Duchy of Lakatamia, seems to have met his royal challenger. Long considered the ‘Prince’ of the Kyproulla political scene, Junior’s title is now, officially, in the hands of Prez Nik. On Monday, during one of a series of pre-election “community events” to drum up voter support from different groups, Anastasiades hosted the Armenians at his humble palace. Among the VIPs was the head of the Armenian Church Aram I, who came in from Lebanon for the occasion and bestowed upon Nik the title of ‘Prince of the House of Cilicia’, the highest honour of the Western Armenian church. On receiving the title, Nik, could not resist responding with the folk saying, ‘άλλος έχει το όνομα, και άλλος τη χάρη,’ which roughly translated, means ‘one has the name, but another has the grace.’ Now we have two princes contesting the presidency.