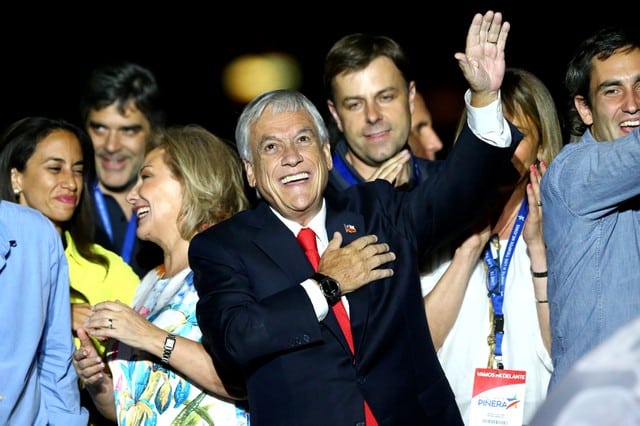 Chile‘s electoral authority called the election for former president Pinera, who won 54.58 per cent of votes compared with 45.42 per cent for the centre-left Alejandro Guillier, in a race that had been considered a toss-up.

In the end, the 68-year-old Pinera, who governed from 2010 to 2014, won more votes than any president since Chile‘s return to democracy in 1990. It was also the biggest ever loss for the centre-left coalition that has dominated Chile‘s politics since the end of Augusto Pinochet’s dictatorship.

Neither Pinera nor Guillier marked a dramatic shift from Chile‘s long-standing free-market economic model, but Pinera’s victory underscores an increasing tilt to the right in South America following the rise of conservative leaders in Peru, Argentina and Brazil. He is due to be sworn in on March 11.

“Despite our great differences, there are large points of agreement,” Pinera said of Guillier as his supporters waved Chilean flags in downtown Santiago. In the streets of Santiago’s wealthy neighborhoods, where Pinera took some 90 per cent of votes, residents blared their horns in support.

In his concession speech, Guillier called his nine-point loss a “harsh defeat” and urged his supporters to defend the progressive reforms of outgoing President Michelle Bachelet’s second term.

Pinera defeated Guillier, a former TV anchorman and current senator, by painting his policies as extreme in a country known for its moderation, and likening him to Venezuela’s socialist President Nicolas Maduro. Guillier had championed Bachelet’s agenda of reducing inequality by making education more affordable and overhauling the tax code.

The investor favourite in the $250 billion economy, Pinera’s proposals are seen as pro mining in a country where copper is king. He has pledged support and stable funding for Chile‘s state-run miner Codelco, and has promised to slash red tape which had bogged down projects under Bachelet.

The campaign exposed deepening rifts among Chile‘s once bedrock centre-left, an opening Pinera leveraged to rally more centrist voters around his proposals to cut corporate taxes and double economic growth.

After a far leftist party made unexpected gains in November’s first round, Pinera seized on the division, campaigning on a platform of scaling back and “perfecting” Bachelet’s tax and labor laws.

Bachelet’s policies were seen by many in the business community as crimping investment at a time slumping copper prices were weighing on the economy.

“I voted for him for the economy,” said Jose Oyaneder, a 54-year-old salesman at campaign headquarters. “When he was president my (business) was quite good and I hope this time it’s the same.”

The results were tabulated in just over two hours after nearly 7 million Chileans cast ballots in a country of 17 million people where voting is not mandatory.

The son of a prominent centrist politician, Pinera is a Harvard-trained economist who made his fortune introducing credit cards to Chile in the 1980s.

Over months of aggressive campaigning, the former president brandished his business success and first term in office as proof of competence, contrasting himself with Guillier’s relative lack of political and executive experience.

Pinera’s first administration was marked by a vibrant economy lifted by booming copper prices, but is perhaps best remembered for the spectacular rescue in 2010 of 33 miners who were trapped underneath the Atacama desert.

His time in power was also marred by incessant street protests by thousands of students seeking an education overhaul, while his government’s responses were often seen as out of touch.

Pinera has promised to make Chile the first country in Latin America to achieve “developed nation” status in the Organization for Economic Cooperation and Development, a Paris-based club of wealthy nations.

“Some things have to be fixed – health, pensions, a lot of discrimination in Chile,” said Laura Garcia, 64, who works in a cleaning company. “I have faith in Pinera.”

Photos of a changing island