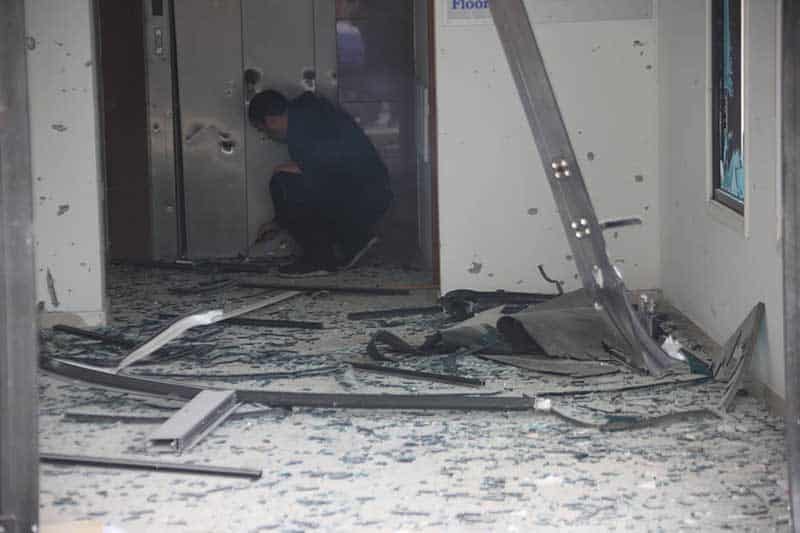 The director of CRI Group, whose Nicosia offices were damaged by a bomb explosion on Sunday said the incident was related to a foreclosure and accused police of doing nothing when he repeatedly received threats while attempting to place the property in question under his administration.

Chris Iacovides said the threats came from the management of a Paphos hotel for which a court order had been issued in August to place it under administration after the proprietor company defaulted on its debt.

Repeated attempts to seize control of the hotel failed, as members of the management resisted but police stood by and did nothing, he said. The latest attempt was last Wednesday and again the police officers failed to intervene.

“The police in Paphos did not help us enforce the court order,” he said in a telephone interview. “Instead, we became the recipients of threats which prosecutors were still investigating”.

The blast which occurred at 7:25 pm on Sunday and is attributed to an improvised device, injured a 36-year-old male resident and damaged cars parked nearby in addition to damaging the ground floor of the building, police said.

The injured man was taken to the Nicosia general hospital where he was treated for injuries to the stomach. He was kept in overnight but was out of danger.

Following the blast, police on Monday arrested a 50-year-old suspect in Paphos who was brought to Nicosia for questioning. Police said he denied any involvement.

The incident is linked to four bonds in excess of €5m issued in favour of Alpha Bank as a security to a loan.

The default prompted the bank to terminate all credit facilities to the unit in 2015.

On August 31, the Paphos district court banned four members of the hotel management from accessing, operating, or managing the hotel.

The court also banned any person acting on behalf of the four from doing so. The order was issued following a motion filed by Iacovides.

The Cyprus Business Mail understands that the arrested suspect is one of the four hotel managers against whom the order was issued.

A police spokesperson said that the presence of the police aimed at ensuring law and order would be maintained and added that it is up to the court to decide whether the order was disobeyed or not.

“The matter is managed by Paphos police,” the spokesman said.

Non-performing loans, which account for 45 per cent of Cypriot banks’ loan portfolio, are considered one of the major risks for Cyprus’s financial and economic stability. The Central Bank of Cyprus repeatedly asked lawmakers to bolster the foreclosure and insolvency legislation, tentatively modernised as part of Cyprus’s economic adjustment programme.

The difficulties encountered in enforcing the court order highlight the findings of the World Bank which ranked Cyprus in 138th place among 190 countries in its 2017 Doing Business Report in terms of enforcing contracts.

The enforcement of the foreclosure legislation has repeatedly encountered obstacles in the past when it involved primary residencies.

15 years of putting metal to the people