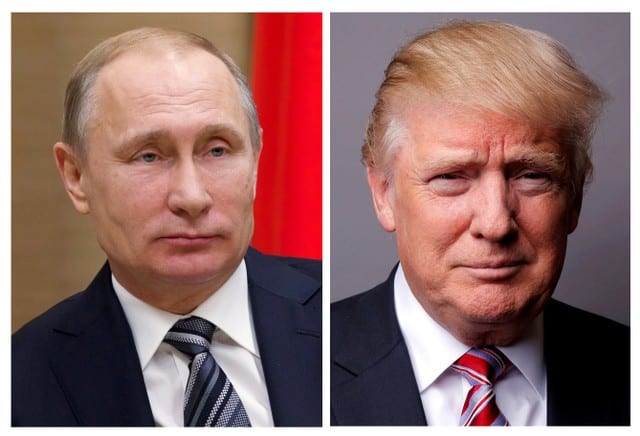 The United States provided intelligence to Russia that helped thwart a potentially deadly bomb attack in St. Petersburg, US and Russian officials said on Sunday, in a rare public show of cooperation despite deep strains between the two countries.

Russian President Vladimir Putin telephoned US President Donald Trump on Sunday to thank him for the tip-off, which the Kremlin said helped prevent a militant bomb attack on a cathedral in the Russian city, as well as other sites.

The White House did not disclose details about the plot itself, but said the attack “could have killed large numbers of people.” Neither the Kremlin nor the White House identified the would-be attackers.

The US warning allowed Russian law enforcement agencies to arrest the suspects before they could carry out their plans, the White House and Kremlin said.

Relations between Washington and Moscow have been damaged by disagreements over the wars in Ukraine and Syria, although Trump pledged during his election campaign to pursue better ties with Moscow.

That has been complicated by US allegations – denied by Russia – that the Kremlin meddled in last year’s US presidential election to help Trump win.

Russian officials say Putin believes Trump is not to blame for the tensions.

The phone call on Sunday between Trump and Putin was at least the second such call in the past week. On Thursday, Putin and Trump discussed the crisis in North Korea.

The foiled attack was to have been carried out on Kazansky Cathedral, in Russia‘s second city of St. Petersburg, and on other locations in the city where large numbers of people gather, the Kremlin statement said. The cathedral is a popular tourist site.

The White House seized on the foiled plot in St. Petersburg as a sign of what Moscow and Washington could do if they cooperate.

“Both leaders agreed that this serves as an example of the positive things that can occur when our countries work together,” the White House said, adding Trump appreciated the call from Putin.

Russian media reported last week that the Federal Security Service had detained followers of the Islamic State group who had been planning a suicide bomb attack on Kazansky Cathedral on Saturday.

The US Central Intelligence Agency and the Office of the Director of National Intelligence did not immediately respond to requests for additional details on the foiled plot.

Putin said Russia would alert US authorities if it received information about any attack being planned on the United States, the Kremlin said.

Russia has repeatedly been the target of attacks by Islamist militant groups, including an attack in April that killed 14 people when an explosion tore through a train carriage in a metro tunnel in St. Petersburg.

Anorthosis join AEK at the top of the table

Seven shot in Louisville protests over killing of black woman