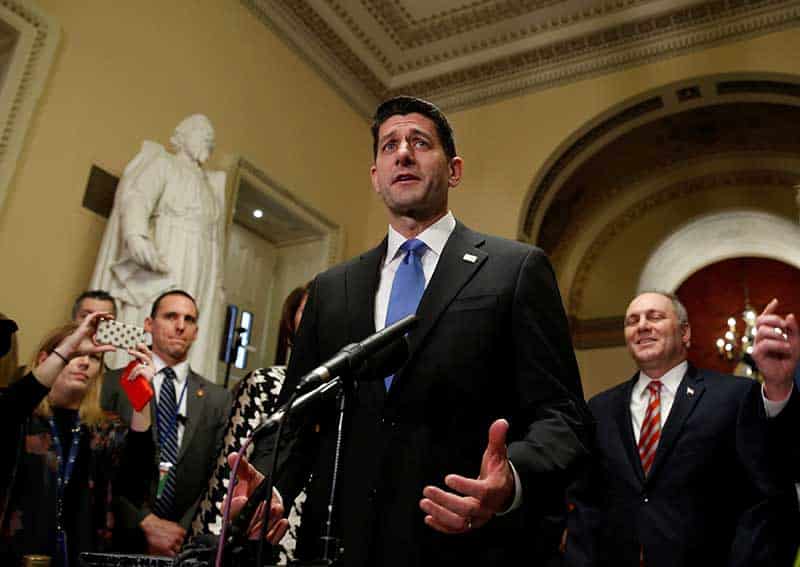 Speaker of the House Paul Ryan

The Republican-controlled U.S. House of Representatives approved sweeping, debt-financed tax legislation on Tuesday, sending the bill to the Senate, where lawmakers were due to take up the package later in the evening.

The biggest overhaul of the U.S. tax system in more than 30 years could be signed into law by President Donald Trump as soon as Wednesday, if both chambers of Congress approve it.

With Treasury Secretary Steven Mnuchin watching from the gallery, the House passed the bill by a vote of 227-203, overcoming united opposition from Democrats and 12 Republicans who voted against it.

Passage was all but certain in the Republican-controlled Senate, as well.

The plan includes steep tax cuts for corporations and wealthy taxpayers, as well as temporary tax cuts for some individuals and families. It repeals a section of the Obamacare health system and allows oil drilling in Alaska’s Arctic National Wildlife Refuge, just two of many narrow changes added to the bill to secure sufficient to win its passage.

Republicans insist the package will boost the economy and job growth. They also see the measure as key to retaining their majorities in the House and Senate in elections next November.

“Today, we give the people of this country their money back. This is their money, after all,” House Speaker Paul Ryan said shortly before the vote.

Democrats say the bill will widen the income gap between rich and poor Americans, while adding $1.5 trillion over the next 10 years to the mounting $20 trillion U.S. national debt.

House Democratic Leader Nancy Pelosi called the bill a “Frankenstein monster” riddled with carve-outs and loopholes that falls far short of the Republican promise of simplifying the tax code.

“This monster will come back to haunt them,” she said on the House floor.

The plan includes a steep tax cut for businesses and temporary tax cuts for individuals. Middle-income households would see an average tax cut of $900 next year, while the wealthiest 1 percent would see an average cut of $51,000, according to the nonpartisan Tax Policy Center.

Some 52 percent of adults oppose the tax plan, while 27 percent support it, according to Reuters/Ipsos polling.

The end-of-year sprint represents a remarkable recovery of Republican fortunes since the middle of this year, when the party’s drive to dismantle former Democratic President Barack Obama’s Obamacare healthcare law crumbled in the Senate and prospects for a tax overhaul seemed doomed by party infighting.

Republicans control the 100-seat Senate by only a 52-48 margin and can afford to lose support from no more than two party lawmakers. Republican Senator Jeff Flake was still undecided on Tuesday. Senator John McCain, who has brain cancer, was spending time with family in Arizona.

Vice President Mike Pence took the precaution of rescheduling a trip to Egypt and Israel for January so he would be on hand this week in case his tie-breaking voting power is needed to ensure Senate passage of the bill.