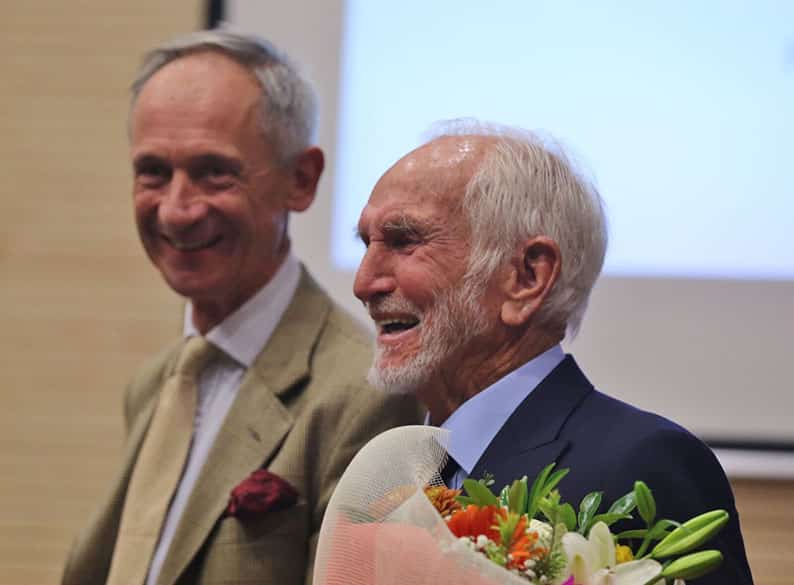 Ray Woolley told the Cyprus Mail that his Guinness world record was confirmed by email on Wednesday.

“This is a lovely Christmas present and I feel very lucky to be as fit and healthy as I am and hope to keep diving for as long as I can,” said Woolley.

In August, the nonagenarian spent his 94th birthday diving to the sunken wreck of the Zenobia ferry in Larnaca in his World Record bid.

Ray’s dive saw him reach a depth of 38.1 metres for 41 minutes, and he often dives down to more than 40 metres.

He said his success was down in part to the help received from others such as fellow members of the Akrotiri British Sub Aqua Club, especially David Turner the diving officer his daughter Lyn.
Although the title specifies the world’s oldest male scuba diver, Wooley is in fact the world’s oldest diver overall.

Originally from Port Sunlight in the Wirral, Ray now lives in Ayios Tychonas close to Limassol and likes to swim in his pool every day. He was born in 1923 and first started diving with the Portland and Weymouth British Sub Aqua Club in 1960.

Ray is fit, energetic and promotes a healthy lifestyle. He has encouraged many people to take up diving of all ages, and says ‘you’re never too old to do what you love’.

He served with distinction in the Royal Navy radio branch in WW2, before being seconded to the ‘special boat services’. Whilst working for the British Foreign Office, Ray trained as a radio engineer and was first posted to Cyprus in 1964, where he undertook three tours of duty.

“This has been a great year for me as, much to my surprise, I was also given the Hearts of Gold Cyprus Lifetime Achievement Award, 2017,” he said.

He was presented this accolade by the British High Commissioner to Cyprus, Matthew Kidd and awards honorary patron, Charalampos Theopemptou on December 16 in Paphos.

Apple slows some older iPhones because of flagging batteries

Neophytou: smaller parties ought to have a committee chair