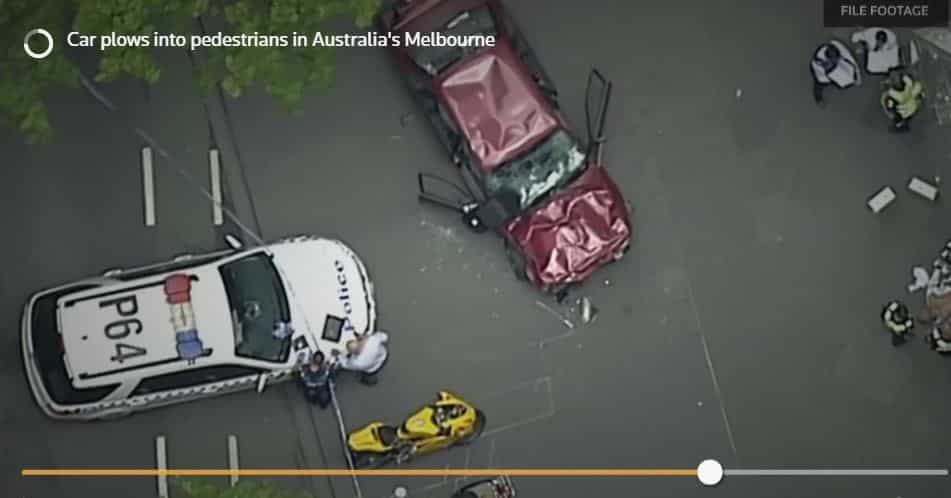 An Australian man of Afghan descent with a history of mental health issues drove a car into Christmas shoppers in the city of Melbourne on Thursday, injuring 19 people, but police said they did not believe the attack was terror-related.

In January, four people were killed and more than 20 injured when a man drove into pedestrians just a few hundred metres away from Thursday’s attack. That too was not a terror attack.

Jim Stoupas, the owner of a donut shop at the scene, told Reuters the vehicle was travelling up to 100 kph (62 mph) when it drove into the intersection packed with people, hitting one person after another.

Police said they detained the 32-year-old driver, an Australian of Afghan descent with a history of assault, drug use and mental health issues.

“At this time, we don’t have any evidence or intelligence to indicate a connection with terrorism,” said the acting chief commissioner of Victoria State, Shane Patton.

Four of the injured were in critical condition, including a pre-school aged boy who suffered a head injury.

Police also detained a 24-year-old man at the scene who was filming the incident and had a bag with knifes.

Patton said it was “quite probable” the 24-year-old was not involved.

The men had not been charged and their names have not been released by police.

The attack took place on Flinders Street, a major road that runs alongside the Yarra River, in the central business district of Australia’s second-biggest city.

Melbourne has installed about 140 concrete bollards in the city centre to stop vehicle attacks by militants similar to recent attacks in Europe and the United States.

“Our thoughts & prayers are with the victims & the emergency & health workers who are treating them,” Prime Minister Malcolm Turnbull said in a post on his official Twitter account.

Australia has been on a “high” national threat level since 2015, citing the likelihood of attacks by Australians radicalised in Iraq and Syria.

Two hostages were killed during a 17-hour siege by a “lone wolf” gunman, inspired by Islamic State militants, in a cafe in Sydney in December 2014.

Increased levels of dust in atmosphere