These eye witness accounts from those who were caught up in the Greek Coup, the two phases of Turkish invasion, and the brief cease-fire in between, are far more powerful than any academic history

So much has been written about the recent history of Cyprus, especially 1974, that it would be easy to think no more could be usefully added, but it can, and this book could be a start.

This is equivalent to oral history, a series of short biographies of 16 Cypriots, ten Greek Cypriots, four Turkish Cypriots, a Maronite and an Englishman. Their dates of birth range from 1939 to 1958, but all have vivid memories of 1974.

Each chapter is dedicated to one person’s memories but follows the same template. Their dates of birth are put in the context of what was happening in the world at that time. There then follows a brief summary of their life, family, education and work leading to their memories of 1974. Just as the rest of the world remembers where they were when J F Kennedy was assassinated, all Cypriots have very personal recollections of where they were, and what they were doing during the momentous events of July and August 1974. We hear what happened to them, both in the immediate aftermath and subsequently.

The book ends with 40 short stories, mostly quotations from books covering this period, together with extracts from official records, and some mini-biographies of actors in the drama.

Elias Pantelides has his own chapter, which was four years in the writing. He started recording his own memories in 1975, then found the other contributors, many of whom have also written books or articles. You can see their photographs on the front cover and Elias’ beloved Yialousa in the Karpas peninsula on the back.

These eye witness accounts from those who were caught up in the Greek Coup, the two phases of Turkish invasion, and the brief cease-fire in between, are far more powerful than any academic history. They show clearly how these unexpected events had a dramatic impact on those caught up in them.

It would be unfair to single out any specific memories, or quote from individual memories, but reading these 16 biographies there are some recurring themes worth exploring.

The book illustrates the general atmosphere of chaos and confusion on Cyprus back in 1974. There were bitter and worsening divisions between Makarios, the police, and his supporters on the one hand: and military Junta Greece, their Officers in the National Guard and ELDYK, and EOKA B terrorists on the other.

With the benefit of hindsight, we can see that something was about to blow, but the coup and the attempted assassination of Makarios seemed to have taken most by surprise. There are many accounts of people expressing grief or elation on hearing the news that Makarios had been killed, and the opposite once it was clear that the rumours were incorrect.

News of the landings of Turkish paratroopers and amphibious troops on Cypriot soil were initially treated with disbelief. The call-up of reservists was patchy and haphazard. There are accounts of poor, sometimes verging on non-existent, communications between various armed units. As often in war, combatants spent hours and days on the move, but the poor deployment of defending forces described by several contributors must have hastened the end result.

There are several harrowing accounts of Greek army officers abandoning their mostly Greek Cypriot forces in the field, even before the Colonels fell and Karamanlis returned to Athens to announce that Greece cannot help Cyprus because it is too far away.

The end was as confusing as its beginning. There was no demobilisation plan; some people were told they could leave their units, others just went home. Of course, some could not do that as their families had become refugees in their own country. Some were prisoners who would be freed under the exchanges in the autumn of 1974. Many were not so lucky – they had lost their lives in the conflict, or were listed as ‘missing.’

After the cease-fire, the line was patrolled by UN soldiers, so to travel from one part of Cyprus to another involved a round trip via Athens and Istanbul, or vice versa.

Not surprisingly many decided to leave for the UK, other European countries or the Persian Gulf. Many did not to return to their island home until years later.

It is striking that, despite the experiences that all these contributors had in 1974, all have maintained their love for this island.

And all have been hoping for a united, peaceful, safe Cyprus.

This review first appeared in Friends of Cyprus Report. Friends of Cyprus was founded in London in 1974. Its first Chairman was Lord Caradon (Hugh Foot, the last British Governor of Cyprus).Its current Chairman is Nicholas Bethell MEP.The three MP Vice-Chairmen are Robin Corbett (Labour), Roger Gale (Conservative) and Simon Hughes (Liberal Democrat).The members of the Committee are mostly British parliamentarians in the Houses of Parliament and the European Parliament. 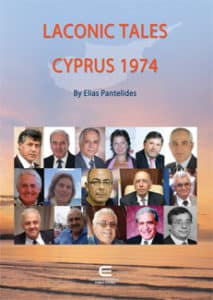 Khloé Kardashian has confirmed she is pregnant