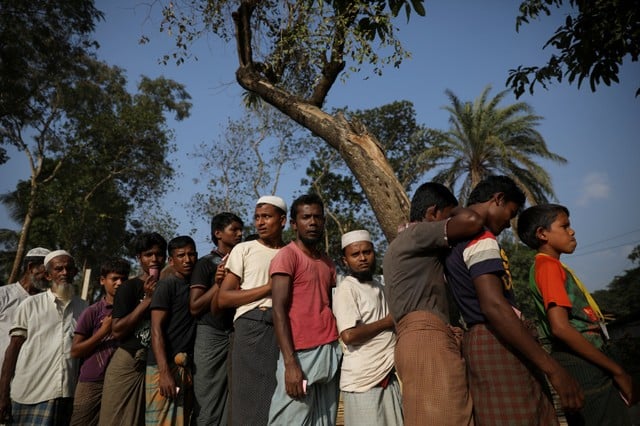 The US government, applying penalties for the first time under a law passed last year, also targeted 39 other individuals and entities with sanctions that block their assets under US jurisdiction, bar most Americans from dealing with them and largely cut them off from the global financial system.

Myanmar‘s government spokesman was not immediately available for comment on the US sanctions.

Reuters has been unable to reach Jammeh for comment since he went to exile. He has previously denied ordering the torture or death of political opponents. His lawyer until exile, Edward Gomez, said earlier this year that he was unaware of any misspending of public or charity funds by Jammeh.

Gertler has denied all allegations of impropriety and has said his investments in Congo have created thousands of jobs. A spokesman for his Amsterdam-based company the Fleurette Group was not immediately available for comment.

Myanmar‘s military cracked down on Muslim Rohingya from Rakhine state following Aug 25 Rohingya militant attacks on an army base and police posts. Maung Maung Soe was in charge of the operation that drove more than 650,000 Rohingya to flee mostly Buddhist Myanmar to Bangladesh.

The United States on Nov 22 called the Myanmar military operation against the Rohingya population “ethnic cleansing” and threatened targeted sanctions against those responsible.

The United States “examined credible evidence of Maung Maung Soe’s activities, including allegations against Burmese security forces of extrajudicial killings, sexual violence and arbitrary arrest as well as the widespread burning of villages,” the Treasury Department said on Thursday.

Myanmar‘s army last month released a report denying all allegations of rape and killings by security forces, having days earlier replaced Maung Maung Soe. No reason was given for his transfer from the post.

“We must lead by example, and today’s announcement of sanctions demonstrates the United States will continue to pursue tangible and significant consequences for those who commit serious human rights abuse and engage in corruption,” US Secretary of State Rex Tillerson said in a statement.

The sanctions against the 13 people described by the Treasury Department as “serious human rights abusers and corrupt actors” and the 39 “affiliated individuals and entities” were the first imposed under a US law called the Global Magnitsky Human Rights Accountability Act.

Jammeh, who ruled Gambia for 22 years before being forced into exile after refusing to accept an election defeat, created a terror and assassination squad reporting to him called the Junglers that threatened, terrorised, interrogated and killed people he saw as a threat to his rule, the Treasury Department said.

The sanctions targeted Gertler, considered by diplomats to be a member of Kabila’s innermost circle, 19 of his businesses and his Congo-based associate Pieter Deboutte.

The United States imposed sanctions this year and last against top Democratic Republic of Congo security officials over alleged human rights abuses and the failure to organise an election on time to choose Kabila’s successor.

Theresa May to visit British bases on Friday