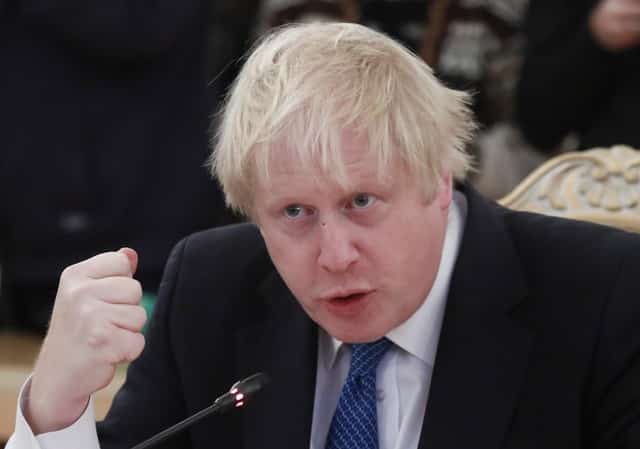 On the first visit to Russia by a British foreign minister in five years, Johnson said he wanted to normalise UK-Russia relations, which were going through “a very difficult patch”.

But that didn’t mean pretending that Britain did not have serious concerns about Russia‘s behaviour, he said.

” … We can’t pretend that they (the problems) do not exist, and that we share a common perspective on the events in Ukraine, or in the Western Balkans or … on Russian activities in cyberspace,” said Johnson.

He also said Britain had a duty to speak up for the LGBT community in Chechnya. Two men from Chechnya told Reuters in June they had been tortured because they were gay. Chechen authorities deny the allegations.

Johnson’s visit comes at a time when relations between London and Moscow are strained by differences over Ukraine and Syria as well as by allegations, which Russia flatly denies, that Moscow has meddled in the politics of various European countries by backing cyber attacks and disinformation campaigns.

Russian Foreign Minister Sergei Lavrov challenged that narrative, however, saying Johnson himself had recently said he had no proof that Moscow had meddled in last year’s British referendum on leaving the European Union.

“Not successfully, not successfully, I think is the word,” Johnson – a leading advocate of Brexit – shot back, to which Lavrov replied: “He’s scared that if he doesn’t disagree with me, his reputation will be ruined at home.”

Johnson, who said there was abundant evidence of Russian election meddling in Germany, the United States and other countries, said it was Lavrov’s reputation he was worried about.

“I think it is very important … to recognise that Russian attempts to interfere in our elections or in our referendum, whatever they may have been, they’ve not been successful,” said Johnson.

Lavrov said he blamed Britain for the poor state of relations, complaining about “insulting and aggressive statements” from London. He also complained about Britain airing its differences with Moscow publicly rather than in private.

But although the two men spent much of their joint news conference exchanging barbs, both sounded upbeat when it came to trying to cooperate in narrow areas, such as in the UN Security Council, and on security arrangements for next year’s soccer World Cup in Russia.

Lavrov complained, however, that Britain was still not fully cooperating with Russia‘s FSB security service.

Johnson had riled Russian officials before his visit by telling Britain’s Sunday Times newspaper that Moscow was “closed, nasty, militaristic and anti-democratic”.

But when asked about the comment on Friday, he rowed back, saying he had been referring to the Soviet Union, not modern Russia.

Russian media has portrayed Johnson as anti-Russian. Johnson told reporters on Friday however that he was “a committed Russophile”.

Rivals need ‘more than a miracle’ to challenge Man City