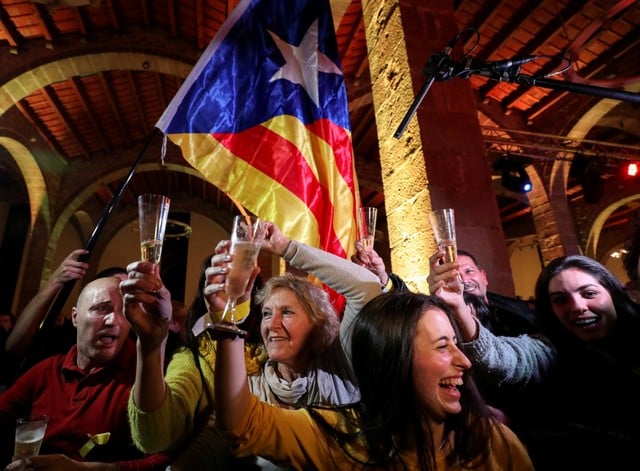 Spanish markets recoiled at a surprise result that is also a setback for the European Union, which must now brace for more secessionist noise as it grapples with the disruption of Brexit and simmering east European discontent.

By risking a parliamentary election in the region, Rajoy appears to have made the same mistake that leaders including Greece’s Alexis Tsipras, Britain’s David Cameron and Italy’s Matteo Renzi have made in recent years: betting that voters would resolve their troublesome domestic conundrums for them.

With well over 99 per cent of votes from Thursday’s election counted, separatist parties had secured a slim majority.

Spain’s stock market fell around 1 per cent and the country’s borrowing costs rose as investors bet the ensuing ramp-up in tensions with its richest region will hurt the eurozone’s fourth-largest economy.

Rajoy ruled out calling national elections over events that have weakened his authority, while both he and exiled separatist leader Carles Puigdemont said they were open for dialogue.

But they offered no details and such calls in the past have failed to yield any solution.

After several strained months that saw secessionists organise an illegal referendum on Oct 1, and police confiscate urns to try to prevent it from taking place, the election result has done nothing to resolve the standoff either.

The secessionists kept a majority, but it was reduced and they may have difficulty forming a government; and support for unionist party Ciudadanos has surged, but not enough to catapult them into power.

“The divisions are huge. It will take time to mend them and that should be the priority for all political actors, reconciliation within the remit of the law,” Rajoy told a news conference at the government’s Moncloa headquarters.

With Catalonia accounting for a fifth of its economy, Spain had already trimmed growth forecasts for 2018, and the prospect of prolonged uncertainty worries business leaders.

“More companies leaving, less economic activity there – and worse for everyone,” said the chief executive of a major listed Spanish company, speaking on condition of anonymity because of the tense climate of the independence debate.

More than 3,100 firms have shifted their headquarters out of the region since October’s referendum.

Overnight hotel stays rose 2.1 per cent in Spain in November but fell 7.3 per cent in Catalonia, the National Statistics Institute said.

‘BACK TO SQUARE ONE’

Rajoy, who called the election after sacking the previous secessionist government, had hoped to mobilise hitherto quiescent supporters of union with Spain and deal separatism a decisive blow.

Instead, his own party performed miserably, and the result raises the question of a return to power for Puigdemont, who campaigned from self-imposed exile in Brussels after Rajoy deposed him asCatalan president.

“Catalonia is back to square one,” said Marco Protopapa, an analyst at JP Morgan, forecasting that tensions would quickly return between Madrid and an “emboldened pro-independence camp eager to exploit the tactical advantage of a favourable election outcome”.

While Rajoy dodged questions about whether he would negotiate directly with Puigdemont, theCatalan politician said now was the time for dialogue between the two.

“We’ve at least won the right to be heard,” Puigdemont said, adding that he was open to returning to Spain if given guarantees that he could take his position as head of a potential new Catalangovernment. Currently he faces the prospect of arrest for his role in organising the banned referendum.

When the Catalan parliament declared independence after the referendum, Rajoy invoked constitutional powers to impose direct rule from Madrid. He promised to restore Catalonia’s autonomy regardless of the election result, but could re-impose it if a new government again pursued secession.

The EU’s major powers, Germany and France, have backed his anti-independence stance despite some criticism of his methods at times.

Meanwhile, Puigdemont’s attempts to gain international support in Brussels have failed so far. He has called the EU a “club of decadent countries” for declining to mediate a solution.

A German government spokeswoman on Friday urged reconciliation in Catalonia, adding that the Spanish constitution would have to be respected.

Secessionists say Catalonia pays an unfair share of taxes to Madrid, but investors fear independence would knock the indebted region out of the EU and the eurozone by default.

“There is a huge effect on investment from abroad. As there’s a lack of stability here, people who were investing here are going to other cities and other regions,” said Rafael Prisco, commercial director in a real estate agent in central Barcelona that deals mostly with foreign clients.

Europe now ends the year having struggled to build on the integrationist Emmanuel Macron’s victory in the French presidential election in May. Germany faces months of political limbo, Brussels is mired in a nasty dispute with Poland’s right-wing government and a far-right party has just entered the government in Austria.

In Thursday’s vote, Catalonia’s separatist parties won 70 of the 135 seats, compared with 72 last time, with Puigdemont’s Junts Per Catalunya (Together for Catalonia) retaining its position as the largest separatist force.

Ciudadanos (Citizens) won the most votes, but other unionist forces — Rajoy’s People’s Party and the Socialist Party — performed dismally.

The Mall of Cyprus & Coca-Cola Welcome Santa Claus from Lapland