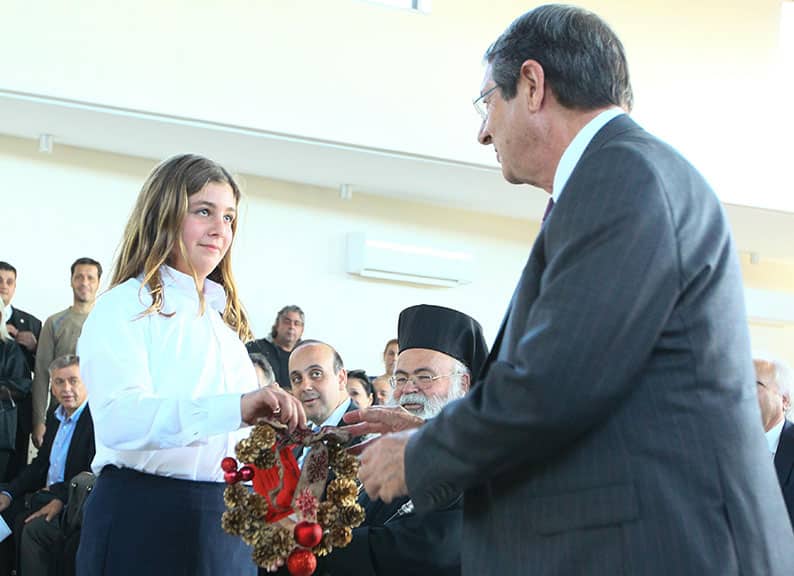 The latest poll predicts an easy win for President Anastasiades, pictured in Drousia on Thursday,

President Nicos Anastasiades looks to have his re-election all wrapped up in a bow tie, a new survey has confirmed.

The incumbent leads by a wide margin, with the poll results showing that the only open question is which candidate will follow him into the runoff ballot.

The survey was conducted by Cymar Market Research Ltd on behalf of the Cyprus Broadcasting Corporation.

Anastasiades was by far the most popular presidential candidate, garnering 53 per cent of favorable views. Independent Stavros Malas (backed by Akel) got 45 per cent, and Diko’s Nicolas Papadopoulos 42 per cent with respondents presumably able to choose more than one candidate.

The president bested his opponents across the board. He was ranked as the candidate most likely to achieve a fair and lasting Cyprus settlement, and deemed as the best to handle the economic recovery and to institute reforms.

Of those polled, 51 per cent said Anastasiades exhibited leadership traits.

He was also the most ‘trustworthy’ of the candidates.

The only instance where Malas came on top was when respondents were asked to evaluate how approachable the candidates are. Here, Malas got 27 per cent.

Respondents were also asked about whom they intend to vote for in the second round.

In the Anastasiades v Malas scenario, 43 per cent picked the president, 25 per cent Malas.

The undecided in all scenarios ranged around 10 per cent.

By party affiliation, 80 per cent of people voting Disy in the 2016 legislative elections said they intend to tick off Anastasiades’ name on the 2018 presidential ballot.

Of Akel sympathizers, 69 per cent would vote for Malas.

Among Diko supporters, only 56.5 per cent plan to vote for Papadopoulos; 22 per cent said they would pick Anastasiades.

Asked who they think will be elected president, irrespective of their party sympathies, 68 per cent said Anastasiades, 10 per cent Papadopoulos, and 5 per cent Malas.

An interesting find in the survey was the public’s growing disinterest in the Cyprus problem.

Asked what was their main criterion in deciding whom to vote for, 39 per cent said domestic governance and only 23 per cent cited the Cyprus issue.

On respondents’ opinions regarding the bizonal, bicommunal federation (BBF) as the model for a Cyprus settlement, 56 per cent of Akel supporters said they were in favour of BBF, followed by 49 per cent among Disy sympathisers, and 39 per cent among Diko voters.

Online, but can’t ditch paper? You may be future-proofing yourself

Catalan separatists win election in rebuke to Spain and EU