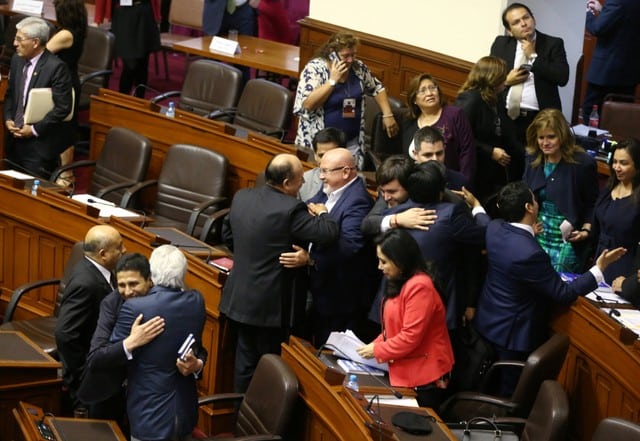 Lawmakers supporting Peru's President Pedro Pablo Kuczynski celebrate after Kuczynski defeated an opposition bid to force him from power, in Congress in Lima

Peruvian President Pedro Pablo Kuczynski has thwarted a bid in Congress to force him out over a graft scandal, as an opposition lawmaker accused him of securing votes by promising to free ex-president Alberto Fujimori from jail.

Before Thursday evening’s vote on a motion to push him out, Kuczynski urged lawmakers to set aside unproven allegations of graft against him to defend Peru from what he called a coup attempt by the right-wing Popular Force party.

Popular Force emerged from the populist movement started in the 1990s by Fujimori, who is now serving a 25-year sentence for corruption and human rights crimes.

Kuczynski’s government had denied that a pardon would be part of a political negotiation. But Popular Force lawmaker Cecilia Chacon told reporters that the government had promised a faction of her party that Fujimori would be pardoned if it backed him.

The bulk of Popular Force, led by Fujimori’s daughter Keiko Fujimori, sought to depose Kuczynski as “morally unfit” to govern after discovering business ties he once had with a firm at the center of the region’s biggest graft scandal.

But the party, which last week mustered 93 votes to begin proceedings, failed to secure the 87 needed to pass the motion, thanks to 10 Popular Force abstentions.

The vote capped a week of political turmoil in one of Latin America’s most stable and robust economies, also the world’s second-biggest copper producer.

“Tomorrow a new chapter in our history begins: the reconciliation and rebuilding of our country,” he tweeted.

Popular Force has vowed to continue to investigate deposits totaling $4.8m that Brazilian builder Odebrecht made to consultant firms owned by Kuczynski or a close business associate of his over a decade, starting in 2004.

Odebrecht has rocked Latin American politics with its confession exactly a year ago that it bribed officials across the region, landing elites in jail from Colombia to the Dominican Republic.

Kuczynski once denied having any professional ties to the company, and has since said he was unaware of the transactions but that there was nothing improper about them.

Kuczynski took office promising that his decades of experience in finance and public administration would help usher in an era of clean government and robust growth.

But his first 16 months in power have been marked by clashes in Congress, where Popular Force has helped oust four ministers.

His triumph on Thursday was the first clear sign that he might be able to exploit a family feud in Popular Force to defend his government from Congress.

Keiko Fujimori faces competition from her younger brother Kenji for leadership of their father’s following.

Hours before the vote, Kenji threw his support behind Kuczynski in a video, without specifying who else he spoke for, saying: “We’re going to prioritise making the president’s administration stronger.”

Kenji has been more vocal than his sister in calling for a presidential pardon for their father.

Alberto Fujimori remains a divisive figure. While some considered him a corrupt dictator, others credit him with ending an economic crisis and leftist rebellion in the 1990s.

Congresswoman Chacon, loyal to Keiko, said the abstainers had been swayed by the government. “They’ve spoken to several of them, offering to free President Fujimori,” she said. “Let’s see if they follow through with it.”

After the vote, Kenji shared a clip from the movie The Lion King, saying only: “The time has arrived.” Many interpreted the post to mean a pardon was pending.

Kuczynski’s government did not immediately respond to requests for comment. Hours before the vote, Prime Minister Mercedes Araoz had denied that the government would trade a pardon for Fujimori in exchange for votes. “That’s not something that’s negotiated,” she told a news conference.

A Justice Ministry spokesman said Alberto Fujimori had sent Kuczynski’s presidential pardons committee a request last week to free him by reducing his prison sentence. The person who filed the request was one of the Popular Force lawmakers loyal to Kenji who cast an abstention.

Prior to the political crisis, Kuczynski said he would make a decision on a pardon for Fujimori by the end of the year.

The ENTERTAINER Unveils Significant Enhancements for 2018