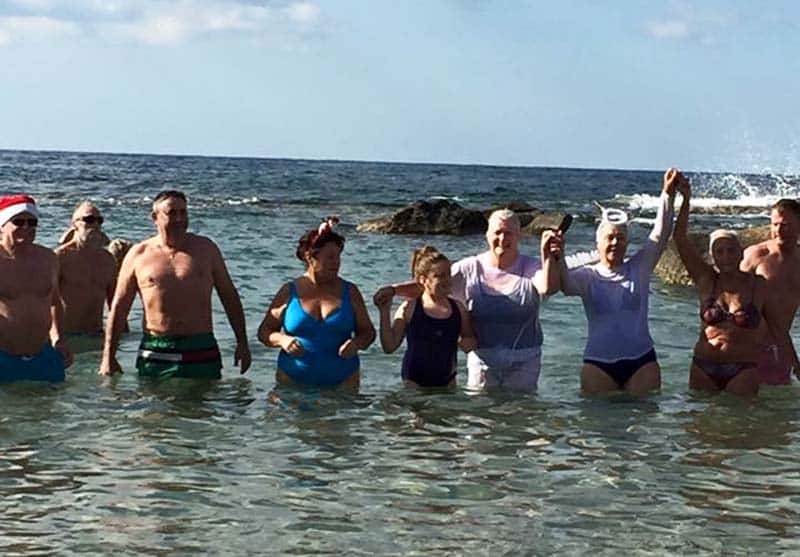 A traditional Boxing Day swim will get underway in Paphos next week which sees tens of fundraisers plunge into the sea to raise money for charity.

For the tenth year, the sponsored swimmers will enter the water at Vardas Beach in Kissonerga at 11am and will have to stay in the water for 15 minutes. Many of the participants are pensioners and all are raising money for various Paphos-based charities.

Dot Bailey, 76, has taken part in the swim for the last six years and is hoping to raise €2,000 for her chosen charity Paphiakos and CCP animal welfare, where she started as a volunteer in 2008.
“We all run into the water together, its great fun and we have to stay in the water up to our neck for fifteen minutes before we can get out,” she said.

Paphiakos and CCP animal welfare is a non-profit charity founded in 1982. It provides numerous ser-vices including veterinary clinics in Paphos and Polis, a tea shop, charity shops and a rescue line and a rehoming service. The shelter is a home to numerous donkeys, horses, dogs, cats, rabbits and goats.

No wet suits are permitted, she said, although swimmers may wear t- shirts and leggings over their swim suits. Another Paphiakos swimmer, is an octogenarian, said Dot, adding that “none of the youngsters supporting the charity had the guts to participate this year.”

Some of the swimmers will wear fancy dress, including Graham Angel from the UKCA Club spon-sored swimmers group. He is swimming to raise funds for the Cancer Patients support group Pa-phos, which provides funds for Pasykaf. Pasykaf was founded 30 years ago and provides help and support for cancer patients and their families.

“It’s my ninth or tenth year and I am hoping to raise €1,000 which will go to the homecare nurses, they are similar to Macmillan nurses in the UK. Nurse Rachel and her team are doing a wonderful job here in Paphos,” he said.

Paphiakos will also provide free transport to their centre after the swim and are offering homemade soup, a hot roll and a glass of wine, beer or a soft drink for €4 to raise funds for the charity.

In addition, the UKCA will open its doors to the public after the event, also providing hot soup and rolls, drinks and entertainment, which is free for the swimmers, and with a small fee to members of the public.

“I hope there will be some sunshine and the water won’t be too cold,” he said.

UN evacuates refugees to Italy from Libya for first time