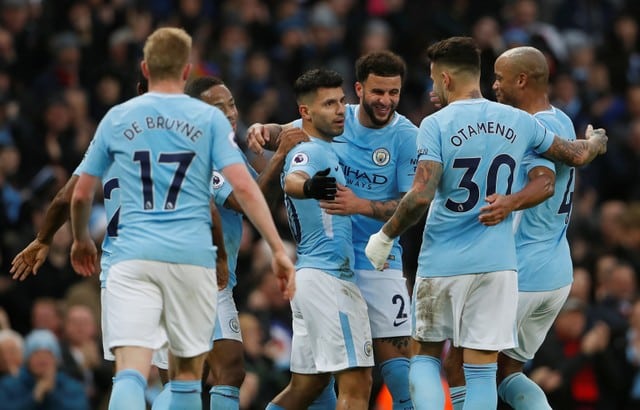 The runaway Premier League leaders picked up yet another three points

The run had begun with victory in added time away to the same opposition in August. This one was much more comfortable and dropped Bournemouth into the bottom three.

Aguero set Pep Guardiola’s team on their way in the 27th minute. Goalkeeper Asmir Begovic lost possession with a poor clearance and Aguero met Fernandinho’s pass with a diving header.

Soon after half-time leading scorer Sterling finished a fine move involving David Silva and Aguero, who then headed his second of the afternoon from a cross by substitute Bernardo Silva.

Danilo, another substitute, scored the fourth within three minutes of coming on.

Elsewhere, Newcastle United finally got back on the winning trail when they secured a crucial 3-2 win over West Ham to move out of the bottom three and end a barren run of four consecutive defeats.

Despite Marko Arnautovic firing West Ham into the lead on six minutes following a bad mistake by Henri Saivet, the north east club showed all their fighting spirit to secure their first three points in nine Premier League games and ease their relegation worries.

Saivet made up for his error when he brought Newcastle level with a curling free kick in the 10th minute, before Mohamed Diame scored the second against his former club shortly after halftime.

Andre Ayew missed a penalty in the 55th and it was to prove costly as Christian Atsu made it three on the hour mark for the visitors. Ayew reduced the deficit in the 69th but Newcastle held on to record their first win since October 21.

Milivojevic beat goalkeeper Lukasz Fabianski with a precise spot-kick down the middle after Swansea defender Federico Fernandez had brought down Palace midfielder Ruben Loftus-Cheek in the box 13 minutes into the second half.

Palace’s lead did not last long as Swansea forward Ayew, who came on in place of winger Luciano Narsingh, smashed the ball into the bottom left corner from outside the box in the 77th minute to give hope to the Welsh side, who were led by temporary manager Leon Britton after Paul Clement’s sacking.

Ghana international Ayew added a touch of urgency to Swansea’s attack and went close with another shot from distance two minutes later but the visitors held on to secure a point.

Southampton’s Virgil van Dijk meanwhile was once again left out in the cold as his side drew 1-1 draw at home to Huddersfield, with the storm of transfer rumours around the Dutch defender continuing to grow.

Van Dijk, a long-term target for Liverpool who has also had his name linked to Manchester City and Chelsea, was an unused substitute in the 1-0 loss to Chelsea the previous weekend and was left out of the squad entirely against Huddersfield .

After withstanding an opening barrage from the visitors, Southampton took the lead half-way through the first half when Wesley Hoedt flicked on James Ward-Prowse’s corner and Charlie Austin stooped to head the ball into the net.

Southampton pressed hard for a second but Laurent Depoitre equalised for Huddersfield in the 64th minute, slipping between Maya Yoshida and Jack Stevens to head home and secure a well-earned point for his side.

Brighton & Hove Albion moved clear of the relegation battle after a second-half goal by German forward Pascal Gross gave the Seagulls a deserved 1-0 win over Watford in a lively Premier League clash.

Gross delighted the home fans with a fierce low shot from the edge of the penalty area in the 64th minute, as it squeezed through Watford goalkeeper Heurelho Gomes’s hands and lifted Brighton into 12th place on 21 points from 19 games.

The result also snapped Brighton’s seven-game winless streak while Watford, who have now taken only one point from their last six games, stayed 10th after a fourth successive defeat.