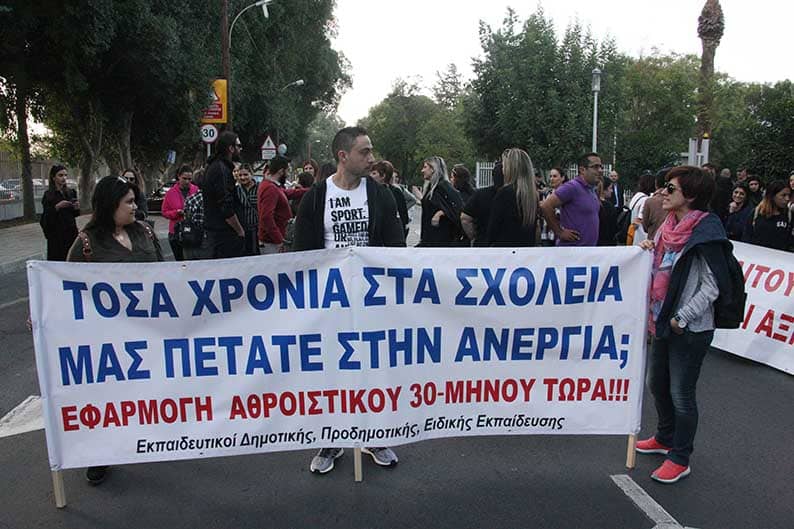 Groups, such as teachers, have been imposing their demands on candidates in exchange for votes

INTEREST in the presidential elections is very low with only a few weeks left before the vote. Apathy rules, with the public disengaged and the media giving basic, low-key coverage to the election campaign, even though each candidate takes part in several events every day and their staff issue countless announcements trying to stir interest. Despite the bombardment of announcements and the daily television shows with representatives of the candidates as studio guests, the only thing people seem to be talking about is which two candidates will go through to the second Sunday run-off.

Perhaps this is an indication of how much our politicians need the Cyprus problem in order to liven up a campaign and spark a lively debate, regardless of the fact that their discourse is theoretical and of little practical value. With the Cyprus problem off the agenda, President Anastasiades having ensured this with the conditions he has set for returning to talks – conditions everyone agrees with – there is nothing to debate as none of the candidates has the courage to back partition as a settlement. That would certainly have whipped up public interest, but instead we have had Nikolas Papadopoulos’ so-called ‘new strategy’, a litany of wishful thinking, which nobody has taken seriously.

On the other issues which could have attracted public interest, there are no differences among the candidates. They are all promising to spend more state money to support pensioners, poor families, haircut victims, bondholders and students, as well as to impose a haircut on loans in order to stop foreclosures. All candidates see the state as the driver of growth that will invest in big development projects and create thousands of jobs, while they claim they will turn Cyprus into a research and technology centre, Stavros Malas claiming he would create 6,000 jobs with this initiative. Spending state money we do not have to buy votes is the central platform of economic policy of all the candidates.

Not one of them has mentioned the need to roll back the frontiers of an excessively interventionist state that stifles foreign investment and puts the brakes on economic growth. A smaller, less bureaucratic state would not only boost development, it would also cost less to run for the taxpayer, freeing funds for projects we really need, such as the national health scheme. For the candidates, economics is not about managing scarce resources and making spending choices, but they give the impression there are unlimited funds and that the state can satisfy everyone. Making choices and prioritising spending might alienate interest groups and lose them votes so they all promise to satisfy everyone.

So, there is zero chance any candidate would mention the excessive power of the public sector unions which often dictate the executive’s decisions, despite not having the constitutional authority to do so. Teaching unions have been left to run public education, with catastrophic results, but nobody dares to say anything about this. Cyta unions have blocked the privatisation of the Authority, despite the commitment made by the government to international lenders, while the EAC unions are threatening strikes to stop the government opening up the energy market. A few days ago, the government announced the establishment of new body (Okyy) to run state hospitals and within 24 hours, doctors’ and nurses’ union were demanding a say.

It is too much to expect the candidates to take a stand on these issues that contribute to the dysfunctionality of the state and undermine the constitution, which has no provision about unions and interest groups taking decisions on behalf of the executive. Worse still, by promising assorted interest groups money and favours, the candidates are reinforcing the idea that politics is about transactions and that people should give their vote to the highest bidder. Nobody is interested in political principles or has a vision of the future, such as creating an efficient and properly functioning state and a dynamic economy that will benefit all its citizens, rather than only the fat cats of the public sector who shout and threaten strikes when they do not get their way.

Perhaps a candidate who raised all these issues would not have much chance of winning elections given the smallness of the electorate, in which interest groups play a defining role, but he would at least spark public debate and breathe some life into a bland campaign killed by the uniformity and conformity of the candidates. How dishonest that the main slogan of all Anastasiades’ rivals is ‘change’, even though they are all ultra-conservatives who plan to change nothing, apart from the recipients of the spoils of power.