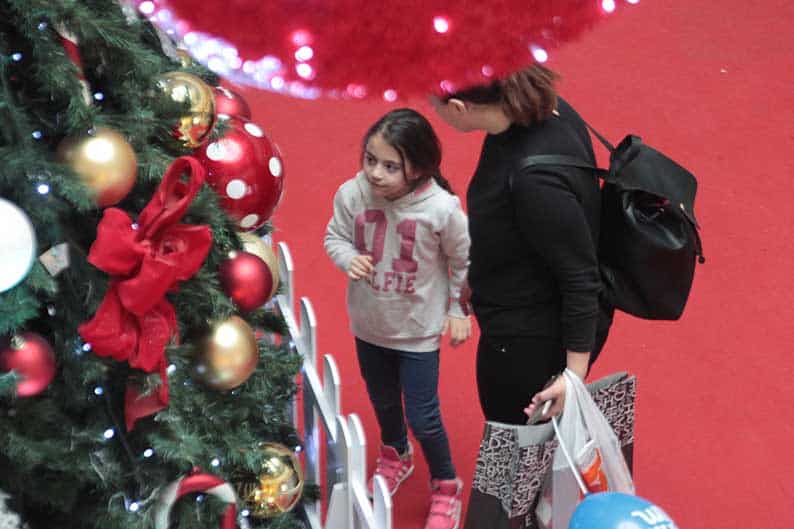 CHRISTMAS is upon us once again and preparations are in full swing for the joyous occasion, exchange of gifts, elaborate banquets and, for some, just another excuse to get drunk.

But the holiest day of Christianity is also the most commercial, one that shop owners are looking forward to, especially after the economy seems to be recovering after the painful recession of the past few years.

Retailers expect a boom in sales this Christmas, with thirteenth salary bonuses alone reportedly pumping around €90m into the local economy.

Consumers have been swarming supermarkets and grocery stores the past two weeks to buy all the necessary items for the festive table. Special offers abound, especially on alcoholic beverages and chocolate. The traditional Christmas sweets – melomakarona, kourabiedes and Christmas cakes – are prominently showcased in bakeries along with fancy chocolate.

Many shop owners expressed satisfaction that business has picked up, but others argue that this depends on the products each shop sells.

For Elisavet Skouridou, owner of a shop that sells orthopaedic shoes on Ledra street in central Nicosia, the festive season is like any other day.

“We sell a very specific product and our customers come here especially to buy shoes on a doctor’s or specialist’s recommendation, or even for work, so we don’t see the same traffic on Christmas as other shops.  We work more in the summer season,” Skouridou told the Sunday Mail. She added that, in general, she doesn’t feel business has picked up.

“Each year things are worse,” she said.

Consumers, she said, usually go after sales. Now that the market is more liberalised, many shops announced sales already, attracting more customers than others who opt to do so after Boxing Day.

“We are on the same levels as last year,” she said.

She added that shopowners have arranged, in cooperation with the Nicosia municipality, to host a number of events to bring a festive mood to the area, among them being carollers, African drummers and events to raise money for an animal shelter.

Another stable performer, especially for ladies, is cosmetics. Perfume and cosmetics shops are bustling with women and men, choosing giftsets for themselves or their loves ones.

“Business has picked up the last few days. We have Christmas offers and our regular offers. Things are better than last year,” said Natasa Kaplaniou, who works at a cosmetics shop.

Other business owners say that they don’t need to wait until Christmas to record better sales, as business is good year-round.

“When your items are amazing, you don’t need to wait for Christmas to sell your stock,” said Eliana Demetriou, owner of the Energie boutique chain.

For Demetriou, the secret of success is to be proactive. “I follow the latest fashion trends and constantly renew my stock to offer my customers what they want,” she said. Consumers know what they want, she added. “Even if you offer them something as low as €1 they won’t take it if they don’t like it,” Demetriou said.

Even though she gets customers coming in to buy clothes for Christmas or New Years’ events, she said she has her stable clientele year-round.

Others say that the increased Christmas traffic doesn’t mean anything to them as regards sales.

“We have more people coming in on weekends, but that’s the norm for the rest of the year,” Nikos Spinthakis of grill restaurant Karvounomageiremata said.

According to Stefanos Koursaris, the head of the small shop owners’ union Povek, member shops throughout Cyprus had already reported a 4.5-5 per cent increase in sales from the beginning of December.

“Unemployment is down, which certainly helps, with shopkeepers also putting on special offers and discounts. Nowadays, almost all municipalities are also trying to attract more shoppers by offering free parking,” he said.

He added that the thirteenth salary bonuses, already paid out to civil servants, bank employees and most private sector employees, is estimated to boost the local economy by €90m.

But some consumers are determined to spend, sales, or not.

Stella Ioannou said she will prefer items on sale as she has many gifts to buy.

“I have come here to spend my thirteenth salary. I need to buy clothes and shoes for my two children. They need them, not only for Christmas, but also for winter that has only arrived now,” Ioannou said.

She added that she won’t avoid something she wants if it’s not on sale.

“Christmas is for children. It’s nice to have something they like. As for us, we can wait until after Christmas to buy clothes or shoes during the sales period,” she said.

Another consumer, Evi Filippou, said she has already spent this month’s salary on her two children and her four god children and that her thirteenth salary was just for her.

“I won’t wait until the sales. I believe that sales in Cyprus are a bit of a joke anyway,” she said.

“What’s the point of waiting to get an item when it will be on sale for only €10 less?” she asked.

Shop owners are also looking forward to next week, as many in Cyprus prefer to exchange gifts on New Year’s Eve, instead of Christmas.

Shop owners on Nicosia’s Makarios Avenue announced that special events will continue to the end of the year. The Nicosia municipal choir will sing to festive tunes on December 28 and 29 between 5pm and 7pm.

On December 29, a charity bazaar will be hosted by ‘Paws Protecting Animals without shelter’, while African drummers will perform on December 30 from 11am to 12.30pm.

Candidates reinforce idea that politics is about transactions

Badly treated with nowhere to turn