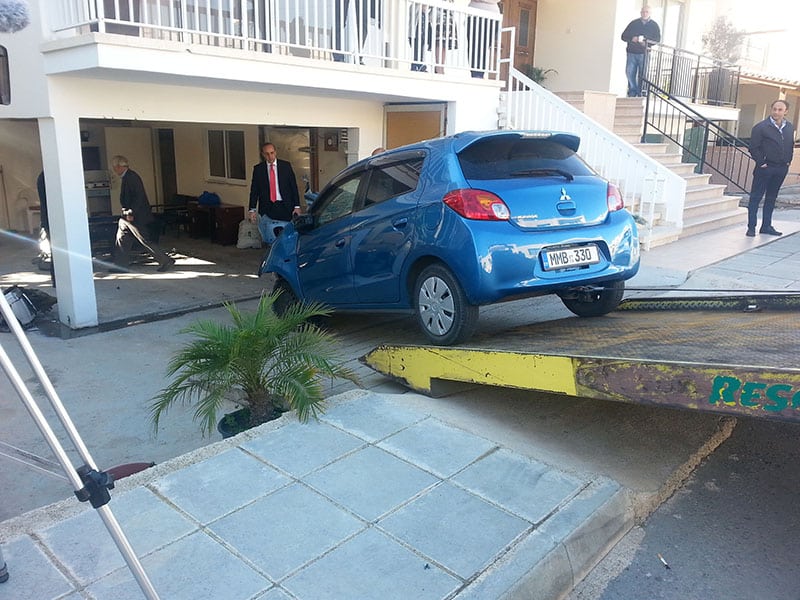 POLICE have brought in 12 suspects for questioning in connection with the bombing on Christmas day of the car belonging to Paphos mayor Phedonos Phedonos’s mother.

Paphos CID chief Michalis Ioannou said Wednesday the suspects are known to the police from other cases concerning drugs and electronic gambling.

The suspects were called in for questioning after the mayor gave a testimony on Boxing Day. Speaking to state broadcaster CyBC radio on Wednesday, Phedonos said that he named more than ten people, who are known to the police for their involvement in crime rings.

The car of Phedonos’ 66-year-old mother was extensively damaged early on Christmas from an explosion caused by a high-intensity explosive device. The car was parked in the basement-level parking lot of her house.

The outspoken mayor criticised authorities for lack of effectiveness, and that, despite having information on several suspects, they did not act promptly.

Phedonos also made claims of a cover-up, either deliberately or due to incompetence.

He referred to an older complaint he had made, concerning €3m in kickbacks, which, he said, not only was not investigated, but the people involved were tipped off.

Ioannou said that in the case the arrest of anyone is justified, police will promptly issue such a warrant.

Phedonos, Ioannou said, gave information and some names which will be “each assessed with the due seriousness”.

The bombing of his mother’s car, Phedonos said, aimed at disturbing his family and to send out a message to anyone else thinking of talking about criminal activities.

Phedonos said that he had not received any threats against him in the past, but was approached by some who had warned him to watch out.

He said that police had increased security measures for himself and his family.

Police denied however any cover ups.

In an announcement, following criticism by Phedonos, the police said that they are handling this case like any other, “with the due seriousness, with impartiality and objectivity”.

The case investigators, the police said, continue their questionings based on the assessment of evidence, data and information.

Phedonos’ claim of cover-ups, the police said, do not concern the force.

“It is unacceptable for public persons to tarnish (the work of the police) with such accusations and baseless claims”, the announcement said.

Police said they have proven their will, determination but also abilities, “hence the constant successes in various serious cases that are brought to light mainly in recent years”.

Phedonos, police said, knows that criminals and public figures have already been sentenced and are doing time in the central prisons.

“Police point out, as has been shown in previous cases of corruption, including cases in the Paphos district, that they not only know their work well, but also act with firm attachment to the law’,” it said.

Phedonos, who slammed as cowardly the bombing of his mother’s car, indentified six types of criminal rings that are rampant in the Paphos district and said he firmly believes that one of them is behind the car bomb.

Drugs trafficking, he said, is run by one person who he is well known to the police, while the antiquities trade is also blossoming despite the fact that authorities have been receiving tip-offs regularly.

According to Phedonos, electronic gambling within Paphos town continues unhindered, with a turnover of hundreds of thousands of euros each month.

He also referred to the corruption in football which, according to the mayor, is run by three people who are known to all.

Phedonos also claimed that authorities have information that a businessman interfered over a period of time in the Department of Urban Planning and the Income Tax Department to benefit financially.

“It is also known,” he said, “that a former banker was bribed so as to grant loans.”

The mayor also said that the only things these criminals have accomplished is to make him even more determined to send them to jail.

The Union of Cyprus Municipalities condemned the criminal act “with the obvious aim of gagging him (Phedonos)”. The union called on police to take appropriate action and investigations to locate the perpetrators and bring them to justice.

Less than 1,000 IS fighters remain in Iraq, Syria – coalition

Russia steps up pressure against Cyprus and EP over Browder