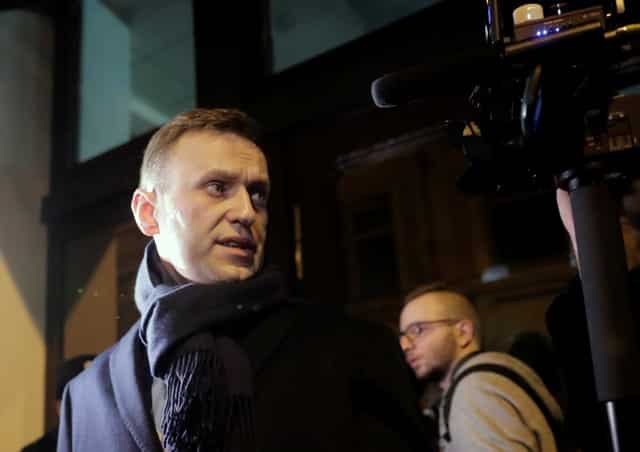 Opposition leader Alexei Navalny announced on Wednesday a series of rallies across Russia in January to press home his call for a boycott of next year’s presidential election, a move likely to draw a sharp response from the Kremlin and police.

Navalny unveiled his plan hours after President Vladimir Putin, who polls suggest is a shoo-in for re-election, registered his candidacy at the central election commission ahead of the March 18 vote.

The commission ruled on Monday that Navalny was not eligible to run against Putin due to a suspended prison sentence.

A furious Navalny, who says the sentence was part of a fabricated case designed to thwart his political ambitions, responded by calling for an election boycott. That prompted the Kremlin to demand an investigation to determine whether his statement broke the law.

On Wednesday, Navalny upped the ante, saying he and his supporters would organise nationwide rallies on Jan. 28 in 85 towns and cities, including Moscow and St Petersburg, to support his call for an election boycott.

“We refuse to call the reappointment of Putin an election,” Navalny said in a statement on his website.

“We are not going to vote and will convince everyone around us not to vote. We are going to campaign (for a boycott) with all our might.”

A boycott could pose a problem for the Kremlin which is keen to ensure a high turnout in the election to help confer legitimacy on Putin’s expected victory amid some signs of apathy among voters.

Under Russian law, the time and place of rallies must be agreed with the authorities who have often declined to authorise them in the past, citing conflicting events or security concerns. When the opposition has gone ahead anyway, the police have broken up rallies by force and detained attendees.

Polls show that Putin, who has led Russia for 18 years as either president or prime minister, is on course to comfortably win another six-year term, allowing him to rule until 2024, when he’ll turn 72.

The former KGB officer is running as an independent, a move seen as a way of strengthening his image as a “father of the nation” rather than as a party political figure.

The ruling United Russia party, which he once led and which controls three quarters of seats in the lower house of parliament, has said it will support him, as will Just Russia, a pro-government centre-left group.

But Navalny says Putin has been in power too long and that his support is artificially maintained by a biased state media and an unfair system which excludes genuine opponents.

Navalny has made a name for himself by successfully leveraging social media and conducting high profile corruption investigations into senior officials. He has also organised some of the biggest anti-government protests in years.

Opinion polls, whose accuracy Navalny dismisses, put his support in single digits while giving Putin an approval rating of around 80 per cent.

Family of four passed out in Kakopetria from gas fumes