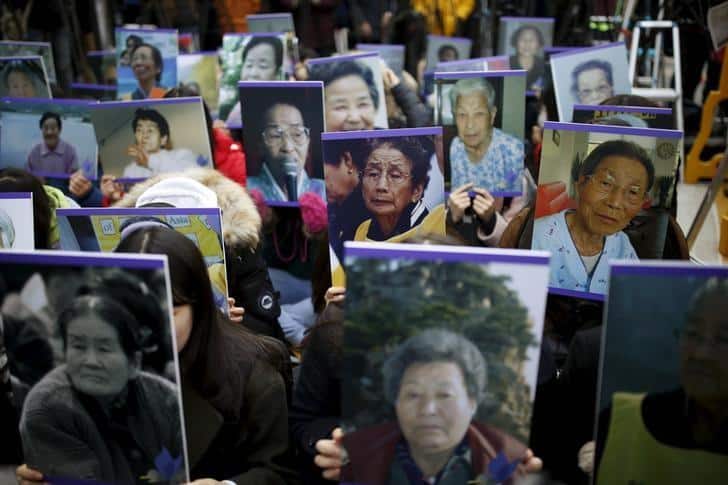 Japan said on Wednesday any attempt by South Korea to revise a 2015 deal meant to have resolved a row over ‘comfort women’ forced to work in Japan‘s wartime brothels would make relations “unmanageable” after Seoul said the agreement had failed.

The two US allies, which share a bitter history including Japanese colonisation, are key to international efforts to rein in North Korea’s nuclear and missile programmes that it pursues in defiance of UN Security Council resolutions.

South Korean Foreign Minister Kang Kyung-wha apologised for the controversial deal on Wednesday, as a panel investigating the negotiations leading up to the agreement unveiled its results.

The investigation concluded that the dispute over the comfort women, a Japanese euphemism for the thousands of girls and women, many of them Korean, forced to work in wartime brothels, could not be “fundamentally resolved” because the victims’ demand for legal compensation had not been met.

“If (South Korea) tries to revise the agreement that is already being implemented, that would make Japan‘s ties with South Korea unmanageable and it would be unacceptable,” Kono said in a statement.

Kang apologised for “giving wounds of the heart to the victims, their families, civil society that support them and all other people because the agreement failed to sufficiently reflect a victim-oriented approach, which is the universal standard in resolving human rights issues”.

Under the deal, endorsed by South Korean President Moon Jae-in’s predecessor and Japanese Prime Minister Shinzo Abe, Japan apologised to former comfort women and provided the fund to help them.

They agreed the issue would be “irreversibly resolved” if both fulfilled their obligations.

Tokyo says the matter of compensation for the women was settled under a 1965 treaty. It says that in 2015, it agreed to provide the funds to help them heal “psychological wounds”.

The South Korean government will review the result of the investigation and translate it into policy after consulting victims and civic groups that support them, Kang said.

The comfort women issue has been a regular cause for contention between Japan and neighbours China and North and South Korea since the war. Japan colonised the Korean peninsula between 1910 and 1945 and occupied parts of China before and after the war.

“(The Moon government) has said it will seek a two-track policy by separately dealing with the comfort women issue and the relationship in the face of North Korea’s threats, but Japan may not agree with that”, Lee Sung-hwan, a professor of Japanese studies in Keimyung University in South Korea, told Reuters.

Japan wants South Korea to remove statues near the Japanese embassy in Seoul and the Japanese consulate in Busan city commemorating Korean comfort women. Seoul says the memorials were erected by civic groups and therefore out of its reach.

According to the investigation, however, the sides struck a separate, secret deal in which South Korea promised to persuade the groups to relocate the statues, provide no support for their overseas statue-raising campaign and refrain from calling the women “sex slaves” on the world stage.

In 2014, the UN Human Rights Committee requested Tokyo to clarify the “comfort women” euphemism, with an independent expert on the panel calling for it to be replaced with “enforced sex slaves”.

“Such an issue of universal value and historical awareness as that of comfort women cannot be resolved through short-term diplomatic negotiations and a political bargain,” said Oh Tai-kyu, a former journalist who led the investigation.

Andrew Horvat, a visiting professor at Josai International University in Japan, said that the pact was flawed from the beginning because it failed to produce real reconciliation.

“The agreement was not reconciliation, but an agreement not to talk about it anymore”, Horvat said.