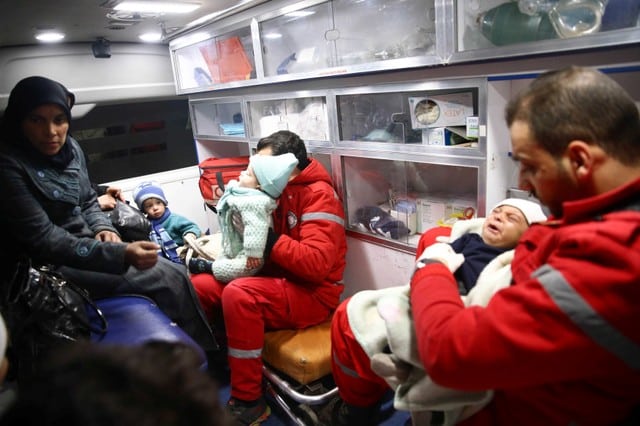 Woman is seen with her children in an ambulance during medical evacuation from the besieged town of Douma, Eastern Ghouta

The International Committee of the Red Cross (ICRC) said it hoped to resume evacuations of critically ill people from Syria’s biggest remaining siege on Thursday after bringing some individuals out of the area near Damascus on Wednesday.

The evacuation, which started on Tuesday after a deal between Damascus and a rebel faction, involved letting some patients leave rebel-held eastern Ghouta in return for insurgents releasing detainees.

International aid agencies voiced concern about the terms of the deal.

UN humanitarian adviser Jan Egeland told the BBC: “It is a not a good agreement if they exchange sick children for detainees — that means children become bargaining chips in some tug of war.”

Valerie Petitpierre, the ICRC’s operations coordinator for the region, said the ICRC continued to insist that humanitarian action should not be used as a bargaining chip.

Last month, the United Nations called on world powers to help arrange the medical evacuation of 500 people, including 167 children, from eastern Ghouta, dubbing it a “humanitarian emergency.”

The world body estimates 400,000 civilians have been under siege in eastern Ghouta by President Bashar al-Assad’s forces.

The enclave is a densely populated pocket of satellite towns and farms and the only major rebel stronghold near the capital Damascus. The military has steadily defeated pockets of armed rebellion in western Syria over the past year, with the help of Russian air power and Iranian-backed militias.

There were varying reports of how many people had been evacuated.

Syria’s state-run Ikhbariya television reported on Thursday that 35 medical cases had been evacuated by the Syrian Arab Red Crescent (Sarc) and 34 detainees held by the rebels released.

The ICRC said it and Sarc had started evacuating 29 serious medical cases late on Tuesday and the ICRC’s Petitpierre said on Thursday that 16 had been evacuated so far.

The Syrian American Medical Society (Sams) said on Twitter that 12 children were evacuated from the area overnight to receive medical care in hospitals in Damascus. It earlier said four had been evacuated on Tuesday.

Yasser Delwan, a Jaish al-Islam political official in Ghouta, said on Wednesday that Sarc had mediated between Damascus and the rebels for the swap.

“We worked to get them out through the Red Crescent, and we are working on evacuating the rest of the nearly 500 cases out,” he said. But there was no indication of whether more evacuations would be allowed, he added.

On Sunday, Turkish President Tayyip Erdogan said Turkey was working with Russia, Assad’s ally, on the evacuations. Ankara has backed some rebel factions in the Syrian war.

Syrian state news agency Sana said on Thursday that hundreds of “kidnapped” still remain in eastern Ghouta, most of whom are women and children.