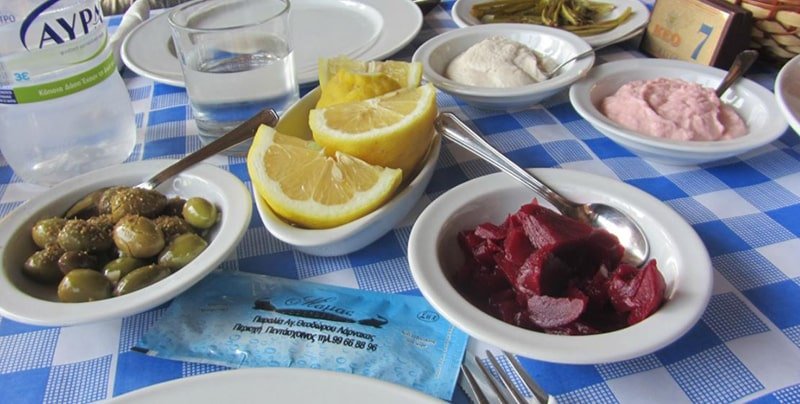 With all the days off coming up there is nothing like a welcome breath of fresh air, especially when it is enjoyed at a restaurant by the sea! Mama’s fish tavern in Ayios Theodoros is a family-run fish restaurant tavern and is right next to the sea – the perfect background sound to accompany any meal.

We went on a public holiday prepared for it to be busy. Unfortunately it was a very windy bank holiday so we decided to sit in a closed off, sheltered area to protect us from the elements. But the table still had the breathtaking sea view.

We knew we would be ordering meze so didn’t look at the menu. However, we had a child with us who didn’t want fish. That wasn’t a problem as the helpful waiter outlines the options available including a freshly home-made burger with chips.

The restaurant was virtually full but we were happy to enjoy a perfectly chilled beer while waiting for the food to arrive. However, instead of taking longer due to the crowds, the food started to come out much sooner than we had expected! We were brought a selection of dips and appetisers including tahini, taramosalata, olives tsakistes (in olive oil and garlic), fresh beetroot, warm, soft bread and a crispy, fresh salad to tide us over while the madness in the kitchen continued. The waiters were buzzing around the tables, collecting dishes and taking food out; it was almost a military operation. The restaurant was extremely organised and running like a well-oiled machine. As a result, we were not left waiting long at all.

All my favourite foods were brought to the table. The hot, crispy and melt in the mouth kalamari was one of the first out. It definitely got the seal of approval even from the child who didn’t want seafood gave it the thumbs up! The kalamari was served with hand-cut chips and going by how tasty they were, we were sure they had been cooked in hot, fresh oil. The shrimps came – and went pretty quickly. In some restaurants the shrimps don’t really have much meat to them once peeled but I could not fault these ones at all. Tender and tasty, we couldn’t resist and ordered an extra serving! Other dishes brought out included mussels and baby crab.

Some tavernas that I have previously been to for fish meze have been loaded with fried fish. But here, while there was a certain amount of fried food there was also a very good selection cokked in other ways including octopus cooked in wine. Octopus can go horribly wrong if not done properly but this had a brilliant balance of the taste of the wine and the octopus while being extremely soft. I also particularly enjoyed the grilled cuttle fish despite some of my fellow diners being put off a little by the natural ink.

As is the norm with fish meze, the last dish brought out was Tsipoura (sea-bream). The fish had been opened up for us but not de-boned. This didn’t prove to be a problem though as the meat literally fell off the bone. With a little fresh lemon squeezed on top, this was a very fitting ending to what had been an extremely tasty and enjoyable meal.

After the table had been cleared we were brought a large plate filled with fresh citrus fruits, grapes and purple figs.

Taking in to consideration the quality of the food, the helpful, friendly and efficient staff, and the fantastic location, everything was reasonably priced. I would not hesitate to visit again and would definitely recommend Mama’s to anyone seeking a brilliant fish meze.