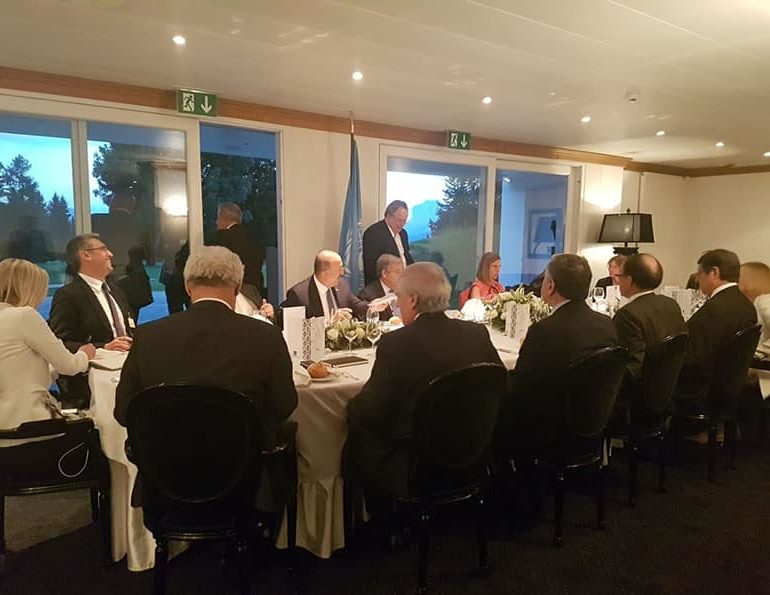 The Last Supper at Crans-Montana where it all fell apart

For Cyprus Mail editor Jean Christou, who has been covering the Cyprus problem for decades, the talks at Crans-Montana were depressingly predictable

For a journalist, one of the more interesting aspects of covering the Cyprus problem for 25 years – yeah, yeah no one in their right mind is supposed to find the Cyprob interesting – is witnessing landmark dates whether it be the Burgenstock negotiations and the referendums in 2004, the opening of the crossings in 2003 or the talks in Crans-Montana on July 6 and 7.

You know deep down after all that time doing the job that nothing will come of any of it but at the same time you can’t help thinking “maybe this time” and next thing you know, it’s morning and you’ve stayed up all night “just in case” there’s a breakthrough. You really should know better but hey, if you’re not curious, you should look for another career right?

Day 9 of the Crans-Montana talks began with the return of United Nations Secretary-General Antonio Guterres in a bid to rejuvenate the negotiations. Cue ubiquitous photo op with the leaders, the foreign ministers of Turkey and Greece, the EU’s Federica Mogherini and Britain’s Sir Alan Duncan.

Turkish Cypriot leader Mustafa Akinci told reporters: “Today is not a day to engage in the blame-game. It is the day to help each other and see if we can reach an agreement. We don’t know whether we will have the same opportunity tomorrow.” Twenty-four hours later he had completely changed his tune.

You knew things were not going well when lunch was pushed back and Guterres had to meet separately with the leaders and the different factions. This went on all afternoon. British Permanent Representative to the United Nations Matthew Rycroft said that Guterres “is straining every muscle to get Cyprus talks over the lines”. He would not have been the first.

During its main evening bulletin that night, Cybc, citing Turkish sources, reported that the UN had a draft framework ready for a political agreement that could even be announced that very evening. This was followed by news that the main evening session with all parties had been cancelled so that was another bad omen, and the working dinner was put off until 10pm Cyprus time. Akinci remarked that it had been a long day “and now begins the long night”. Perhaps he did not realise at the time how long it would actually get for all of us. President Nicos Anastasiades, not exactly known for these following two traits, called for “calm and patience”.

When live reports from the Swiss resort began to look bleaker and bleaker as the evening wore on, deputy government spokesman Victoras Papadopoulos thought he was being clever by tweeting out to us not to be taken in by fake news, the new go-to for politicians, themselves the greatest purveyors of fake news.

But even by midnight, the talks could still have gone either way as all reports suggested there was a hair’s breadth between what was left to agree, or else total collapse.

What was an editor to do faced with having to put the paper to bed or not have it printed on time? It had gone all quiet in terms of information coming from Crans-Montana though we found out later the dinner itself had been anything but. By 2am Cyprus time, the dinner stopped for a break, another bad sign so we packed it in for the print edition.

But the night was far from over.

By 2.50am, Kathimerini reported that there had been no substantial progress while ten minutes later Politis reported that the only remaining issues on the table were the rotating presidency, the withdrawal of troops and the monitoring of the implementation of a solution.

Fifteen minutes later, reports started coming in from multiple media outlets that the dinner was over. By 3.20am, the UN announced that Guterres would speak to the press, which he did at 3.45am saying he was “deeply sorry” that the conference closed without an agreement. Guterres’ news conference lasted only 3.5 minutes. He said he could not isolate a particular issue as the death knell for the talks, but was firm that the conference was over and he wished “the best for all the Cypriots north and south”. Sounded ominous. No other participant attended the news conference.

Then the real fun began, statements, rumours, innuendo and the ubiquitous blame game that’s still going on as the year ends. Both sides accused the other of being responsible for the gigantic failure of the talks that had seemed to swing between ‘almost there’ to ‘never there’ from day to day.

UN Special Adviser Espen Barth Eide tweeted on his way out of Crans-Montana on Friday July 7: “Close, but not close enough: A sombre mood as delegations leave #CransMontana, after 10 days, without agreement”.

Turkish Foreign Minister Mevlut Cavusoglu who tweeted within minutes of the collapse said “unfortunately” the Greek Cypriots’ ‘zero guarantees, zero army’ red line could not be overcome. He even suggested that negotiating within UN parameters might no longer be the answer for Cyprus. Greek Foreign Minister Nicos Kotzias posted on Twitter that “Turkey’s intervention rights on the island could not be made acceptable.”

And while President Nicos Anastasiades made no statements at all on the Friday, Turkish Cypriot leader Mustafa Akinci held a news conference during which he repeated several times that the problem was the insistence on zero troops and zero guarantees by the Greek Cypriots. “The Conference started with it and finished with it,” he said. He also made some comment to the effect that the Greek Cypriots were packing their suitcases the entire time they were there.

The perspective from diplomatic circles surrounding the talks was different. One diplomat in Crans-Montana lamented that the sides had come “so, so close” to succeeding. Indications which had emerged that Turkey was considering relinquishing intervention rights vanished when the Greek side asked for that commitment in writing.

Initially it appeared that it was down to Anastasiades’ stance, as reported by the Cyprus Mail at the time, for which the paper came under heavy fire. Yet, dribs and drabs in the following weeks confirmed those early reports of what had transpired at the ‘Last Supper’. A UN source said: the dinner was a disaster and that Anastasiades “was behaving really badly”.

Each side blamed the other for weeks over a long, hot summer, waiting for Guterres to put the other straight in his eventual report, which came on September 30.

The carefully-worded verdict: a historic opportunity was missed in Crans-Montana, no blame was assigned – yet again – but they all meant well. That’s OK then. Really? So, the Swiss negotiations like all those before them have been consigned to the dustbin of Cyprob history, another special envoy has gone to the diplomat’s Cyprob graveyard, and we await the outcome of the presidential elections before knowing what comes next. And then the hype begins all over again. Can’t wait.

Our View: The year opportunities for change were laid to rest

Ozersay accuses Tatar of using his ideas on cooperation

Fire breaks out in Akaki-Meniko area

Employment and production value fell in Cypriot industrial sector in 2020

Hospital A&E staff to go on strike for 3 hours