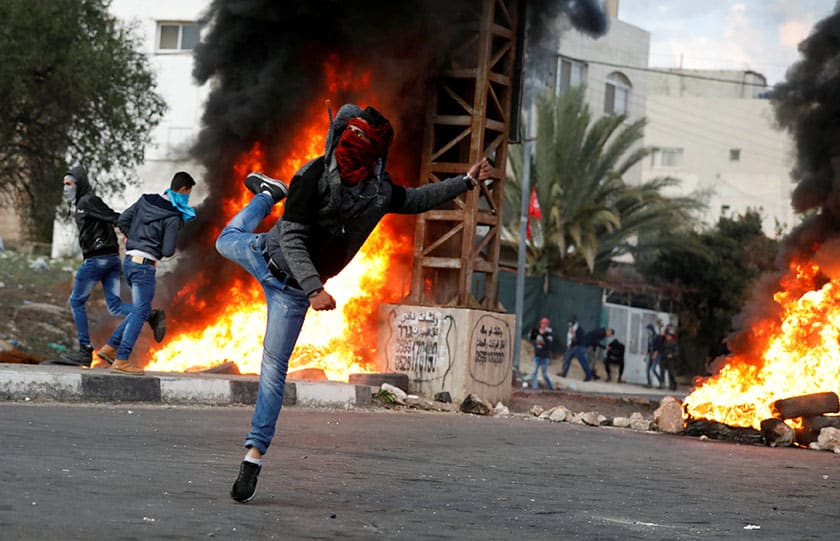 Professional forecasters like to say that making predictions is difficult, particularly about the future. As we reach the end of 2017, however, here are some of the key themes – and questions – that look set to shape global events next year.

President Donald Trump didn’t expect to be TIME’s “Man of the year” for 2017, but 2018 could be the year that we get a clearer idea of the legacy he will leave.

First, it should become clear just how much mileage prosecutor Robert Mueller’s probe into alleged collusion with Russia in the 2016 election really has. Further arrests of high-profile figures might signal that investigators have acquired useful information from key individuals now helping them with their inquiries, particularly former national security adviser Mike Flynn and Trump aide George Papadopoulos. So far we have plenty of rumour, but precious little detail.

The real question is whether Mueller can pin evidence of a conspiracy on Trump. If the prosecutor can’t reach Trump himself, some of Trump’s Russia problems may begin to ease. If, however, it becomes clear the president or those near him have attempted to pervert the course of justice, then the situation will change abruptly. US political experts are virtually unanimous in their belief that Republicans will not impeach Trump in 2018, but that calculus may shift if the Democrats manage to capitalise on Republicans’ unpopularity in the November mid-terms and take control of either the Senate or the House.

In many ways, the likely trajectory of events surrounding North Korea is easier to predict. Based on events so far, it seems almost certain Kim Jong Un will continue to test increasingly powerful bombs and rockets. As Pyongyang’s ability to strike the US mainland increases, Washington will get increasingly aggressive – but likely will still remain reluctant to launch any kind of strike that could trigger a devastating conflagration.

There remain several wildcards in play, however. The most obvious is whether Trump might ignore the cautionary noises coming from the Pentagon and beyond and attempt to decapitate Kim’s regime and weapons programme militarily.

For now, both Japan and South Korea remain extremely cautious about the idea of a unilateral US strike, with South Korea repeatedly stating that it would wish to veto any such action.

Washington’s longstanding alliance with South Korea means that Trump should – in theory, at least – get Seoul’s consent before trying to shoot down a North Korean test missile using regional ground-based interceptors. Such a strategy would be high risk – Washington’s credibility would suffer if the interceptor rocket missed its target.

Aside from the nuclear threat, don’t discount Pyongyang’s growing cyber capabilities. Its suspected efforts to penetrate the US electric grid could escalate into crippling attacks on critical infrastructure.

Keep an eye on Russia and China too. So far, Moscow has been broadly supportive of Pyongyang’s nuclear ambitions while Beijing has been much more cautious. A shift in either position might well influence Kim’s thinking.

This has been a volatile year for Europe. After the shock of the Brexit vote in 2016, France and the Netherlands fended off electoral challenges from the far-right. However, Chancellor Angela Merkel emerged from Germany’s October election with diminished support and a struggle to form a viable coalition government. That means the country may have to go back to the polls next year.

The surprisingly strong performance of pro-Catalan independence parties in December elections means domestic tensions within Spain will remain on the table next year, with a new independence referendum looking increasingly likely.

The problem is none of the strains within the continent have gone away – frustration with government policies on migration, the ongoing struggle to keep the single currency bloc and, of course, the ongoing trauma of how to make Brexit work.

The latter issue will escalate in importance throughout the year, as British and EU negotiators attempt to transform December’s preliminary agreement into a workable deal before Britain leaves the union in March 2019. That progress will inevitably hit problems, and if it breaks down entirely a new UK election – or even another referendum – remain plausible.

The far-right hasn’t gone away either. The results of local and national elections in Belgium, the Czech Republic, Holland, Finland, Hungary, Ireland, Italy and Sweden will all be watched for signs that populists are gaining ground.

For all the sound and fury following Trump’s decision to move the US Embassy in Israel from Tel Aviv to Jerusalem, 2018 will likely see America ever less at the heart of events in the region.

US forces will continue to mop up remnants of Islamic State and other militant groups, but Washington will increasingly take a backseat to regional heavyweights Saudi Arabia and Iran when it comes to driving events. With Tehran seeming to have strengthened its influence in Iraq and Syria this year, expect Sunni Saudi Arabia and its Gulf allies to push back ever harder against their Shi’ite rival.

The war in Yemen will likely remain the bloodiest theatre, a humanitarian catastrophe largely invisible from the outside world. In addition, some analysts already believe Riyadh is already quietly encouraging Israel to consider another war in Lebanon to push back Iran’s Hezbollah proxies.

Another story worth watching will be the push by Kurdish groups for great influence within Turkey, Syria and particularly Iraq, where strains have become particularly severe since September’s independence referendum.

On balance, 2017 was a good year for the leaders in Moscow and Beijing. While the West remained mired in domestic clinical crisis, Chinese President Xi Jinping and Russia’s Vladimir Putin have never looked more in control.

Beneath the surface, however, those assumptions are already being tested. Russia saw a string of anti-government and anti-corruption protests throughout 2017, and Putin will no doubt be hoping to avoid a repeat next year of one of the few prospects that could complicate the presidential election he seems certain to win. Turnout may be reduced, however – challenger and anti-corruption campaign Alexei Navalny called for a boycott this week after he was banned from running against Putin.

In China, Xi secured his position as the most powerful Chinese leader since Mao at the quinquennial Communist Party Congress in September. There too, however, there are signs of quietly mounting discontent and protest, particularly in Hong Kong.

Don’t expect either country to see seismic change next year on the back of these trends. But they are worth watching, for they may point too much more significant things to come.

Peter Apps is Reuters global affairs columnist, writing on international affairs, globalization, conflict and other issues. He is founder and executive director of the Project for Study of the 21st Century; PS21, a non-national, non-partisan, non-ideological think tank in London, New York and Washington

Due diligence before buying property

Wearing the masochist slur with pride