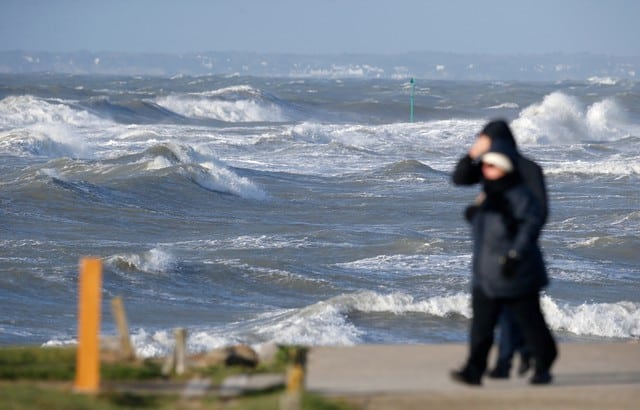 A couple walks near the beach as strong winds and high waves are seen at the Saint Gildas Point in Prefailles, France as Carmen storm hits the French Atlantic coast

Winter storm Carmen has cut power to about 65,000 households in western France and is moving south, power grid company Enedis said on Monday.

Earlier on Monday, some 40,000 households in the Brittany region experienced power cuts but 30,000 have now been reconnected said Enedis, which has mobilised 1,500 staff to restore fix power lines.

Enedis, a unit of French state-controlled utility EDF , said in a statement the storm was now moving to the regions of Poitou-Charente, Pays de Loire and Aquitaine.

Weather service Meteo France kept the French Atlantic coast areas south of Brittany on orange alert, but downgraded the threat level in most other areas of western France.

Winds with speeds of up to 140 kilometres per hour battered the country’s Atlantic coast in mid-afternoon but no serious damage was reported.

Meanwhile in the United States record-shattering arctic cold reached as far south as Florida on Monday with freeze warnings in place from Texas to the Atlantic Coast and the Northeastern United States facing another cold wave at the end of the week, forecasters said.

Temperatures ranged from 20 to 30 degrees Fahrenheit (11 to 17 degrees Celsius) below normal across the United States east of the Rocky Mountains, with only southern Florida untouched by the arctic blast.

“That degree of cold will be with us until tomorrow,” said Brian Hurley, a National Weather Service meteorologist at College Park, Maryland. “Tuesday morning, we’re looking at temperatures with very high probability of record lows.”

Along Alabama’s Gulf Coast, the temperature in the city of Mobile could hit a low of 16 F (minus 9 C) overnight. Stiff breezes were expected to create dangerously cold wind chills across southeastern Georgia and most of northeastern Florida, the weather service said.

Michael Kimberl, co-founder of Sean’s Outpost, an encampment for homeless people in Pensacola, Florida, said he was handing out propane fuel and extra blankets to residents.

“Our community is very unequipped for weather of this type,” he said by phone. Homeless shelters were also making special accommodations, including one site available for women and children, he said.

The mass of frigid air pumped south by a dip in the jet stream sent temperatures plunging across the U.S. heartland. Omaha, Nebraska, posted a low of minus 20 F (minus 29 C), breaking a 130-year-old record, and Aberdeen, South Dakota, shattered a record set in 1919 with a temperature of minus 32 F (minus 36 C).

The cold will be unrelenting across the Middle Atlantic and Northeastern United States, with up to two dozen low-temperature records expected in those regions over the next day or two, Hurley said.

Although the cold should ease across most of the United States after Tuesday, the northeastern quarter of the country will see a repeat of the frigid temperatures from Thursday to Friday as another arctic blast hits the area.

The private AccuWeather forecaster said the cold snap could combine with a storm brewing off the Bahamas to bring snow and high winds to much of the Eastern Seaboard as it heads north on Wednesday and Thursday.

The only part of the United States spared the deep freeze is the Southwest, with above-normal temperatures and dry weather expected to linger there, the weather service said.