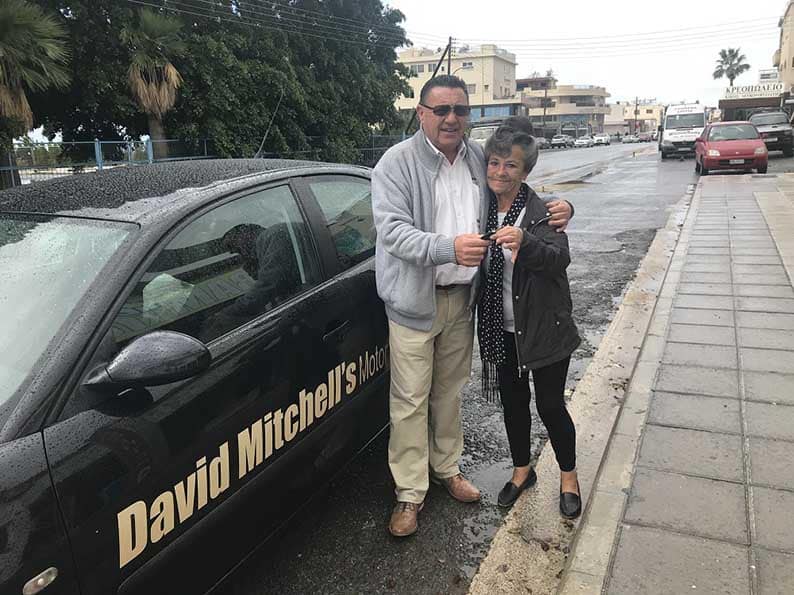 David Mitchell and Gaynor Georgiou and her new car

A PAPHOS businessman has stepped in to help a dedicated cat lover by providing her with a car after hers broke down during her regular stray cat feeding route in the town.

Gaynor Georgiou, 73, affectionately known as the ‘cat lady’, told the Cyprus Mail that she was overwhelmed by the generosity shown by David Mitchell, of David Mitchell’s motor store in Geroskipou, after her car was deemed scrap.

“I don’t know this man. God bless him for what he’s done for me. It’s a miracle, and I couldn’t carry on without him.”

The showroom owner has given Georgiou a Fiat Ibiza to use for a year, but said this arrangement will be renewed annually and will continue indefinitely.

“I was aware of all of the wonderful work that Gaynor does and how dedicated she is. She spends all of her own money on looking after these stray cats and it’s a pleasure to be able to help her out,” he said.

Georgiou’s vehicle broke down just ahead of Christmas, leaving her with no transport to complete her daily rounds in Paphos old town, which sees her feed 160 or so stray and unwanted cats.

“I was desperate, the garage told me that my car engine was cracked and would cost more than 700 euros to replace and fit, my exhaust had gone and the car had other problems, it was scrap really. I just don’t have that kind of money,” she said.

Georgiou attempted to do her daily rounds pushing a shopping trolley full of the necessary paraphernalia to feed the cats, including dry food, tinned food, water and bowls, which she had to top up a number of times during the day.

“I just couldn’t do it, I only managed one day, it was too much for me,” she said.

He was pleased to be able to help.

“I like to have happy customers and it’s good to be able to give something back,” said Mitchell.

He added that although much is done to raise funds for stray and unwanted dogs in Cyprus, cats don’t seem to get as much attention. He will also cover the vehicle’s service costs, tax and insurance cover.

“Gaynor will only have to pay for the petrol,” he said.

Seven days a week, whatever the weather, Georgiou does a daily round of selected feeding places in Paphos town. She feeds and waters the cats who rush to greet her. When possible, she catches the stray cats and kittens and takes them to Paphiakos and CCP animal welfare charity’s free spaying and neutering programme.

Georgiou spends hundreds of euros of her own money on the cats but is reliant on donations for the animals – which amounts to at least 20kg of food every three days. She has been doing this for the last 27 years.

Georgiou is still desperate for help her on her daily rounds and said that volunteering a few hours a week would make a big difference.

“I really worry about what will happen to the cats when I die. I am dedicated to them, they are my family. I would like to know that there is someone to take over,” she said.