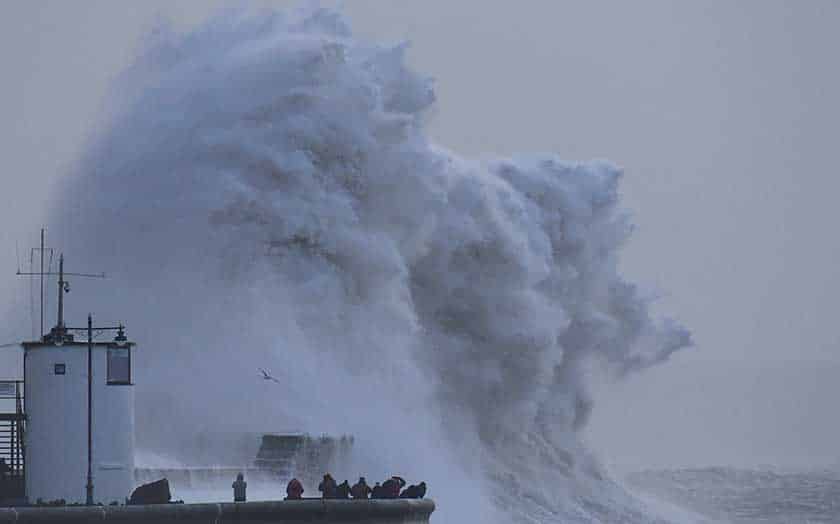 The wind derailed the lead car on the Montreux-Bernese Oberland (MOB) regional train around midday near Lenk in central Switzerland, an MOB spokesman said.

“I have never seen anything like it,” he added.

Gusts on the Pilatus peak near Lucerne hit 195 kph (122 mph), the highest there since records began in 1981, broadcaster SRF reported.

The Swiss weather service issued strong gale warnings for much of the country. Many roads were closed, passenger ferry traffic was halted in some areas and several air flights were cancelled.

Media websites featured pictures and video of the havoc: a light airplane was overturned in Stans, wind tore scaffolding from a construction site near Lucerne, and tractor-trailers were blown onto their sides on some major motorways.

Several people were stranded on a ski lift in St Gallen canton when trees toppled onto the gondola lines, police said.

In the capital Bern, the Christmas tree on display at the main railway station snapped at mid-morning, but no one was injured by the 13-metre high trunk that weighs 2.4 tonnes, Swiss broadcaster RTS said, showing a photo of it on the pavement.

More than a fifth of the originally planned 1,200 incoming and outgoing flights were cancelled as wind gusts reached speeds of up to 120 kph (75 mph).

In France, a skier was killed when a tree fell on him on a ski slope and at least 15 others were injured in storms in northern and eastern regions that cut power to some 225,000 homes, local authorities said.

Households in the Normandy region were the worst hit by storm Eleanor, Enedis, a unit of state-controlled EDF said, while the area around Paris and northeastern Picardie and Champagne-Ardenne were also among those affected.

Homes and businesses on Ireland’s west coast suffered flood damage and 27,000 were left without electricity on Wednesday when Eleanor brought heavy rain and winds of up to 155 kph (96 mph) per hour, hitting the fourth largest city, Galway, particularly hard.

Noisy neighbours a problem for almost one fifth of EU residents, Cyprus 15 per cent

President of the Mormon church, Thomas Monson, dies at 90