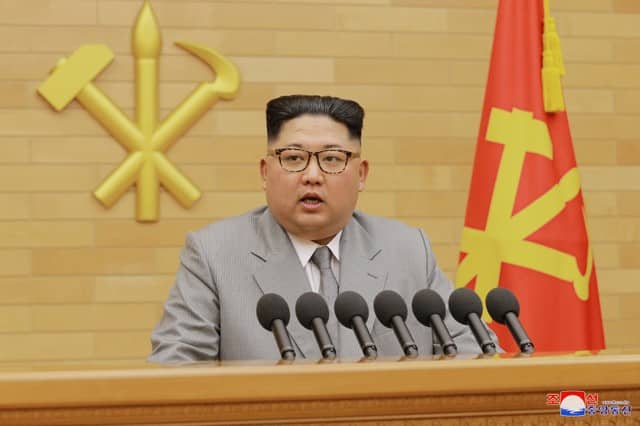 North Korea agreed on Friday to hold official talks with the South next week, the first in more than two years, hours after the United States and South Korea delayed a military exercise amid a standoff over the North’s nuclear and missile programmes.

South Korea said the North had sent its consent for the talks to be held on Tuesday. The last time the two Koreas engaged in official talks was in December 2015.

The meeting will take place at the border truce village of Panmunjom where officials from both sides are expected to discuss the Winter Olympics, to be held in the South next month, and other inter-Korean relations, South Korean Unification Ministry spokesman Baik Tae-hyun told reporters.

North Korea asked for further negotiations about the meeting to be carried out via documented exchanges, Baik said. The officials to represent the two Koreas have yet to be confirmed.

North Korean leader Kim Jong Un opened the way for talks with South Korea in a New Year’s Day speech in which he called for reduced tensions and flagged the North’s possible participation in the Winter Olympics.

But Kim remained steadfast on the issue of nuclear weapons, saying the North would mass produce nuclear missiles for operational deployment and again warned he would launch a nuclear strike if his country was threatened.

US President Donald Trump and his South Korean counterpart Moon Jae-in announced on Thursday that annual large-scale military drills would now take place after the Olympics.

The North sees these drills as preparations for invasion and just cause for its weapons programmes that it conducts in defiance of UN Security Council resolutions. South Korea and the United States are technically still at war with North Korea after the 1950-53 Korean conflict ended with a truce, not a peace treaty.

Trump had earlier called the proposed inter-Korean talks a “good thing” and that he would send a high-level delegation, including members of his family, to the Olympics, according to South Korea’s presidential office.

In a tweet, Trump, who hurled fresh insults at the North Korean leader this week, took credit for any dialogue that takes place.

“Does anybody really believe that talks and dialogue would be going on between North and South Korea right now if I wasn’t firm, strong and willing to commit our total ‘might’ against the North,” Trump tweeted.

The ramped-up momentum for inter-Korean dialogue follows a year of missile and nuclear tests by North Korea as well as an exchange of bellicose comments from Trump and Kim, which raised alarm across the world.

Earlier this week, Nikki Haley, the US ambassador to the United Nations, said Washington had heard reports that Pyongyang might be preparing to fire another missile.

South Korea’s defence ministry has said it had yet to see any evidence of an imminent missile launch.

Analysts with the website 38 North, which tracks North Korea, reported Pyongyang may be preparing to test a rocket engine at a facility in Sohae, North Pyongan province, where all of the North’s satellite launches have taken place since 2012.

Commercial satellite imagery from Dec. 25 showed a rail-mounted environment shelter had been moved away from a test stand, indicating that an engine test may be in the near future, the website said, rather than a new rocket launch suspected in recent media reports.

“I think what is important is to maintain a firm defence posture,” he told reporters in Tokyo.

“North Korea goes through phases of apparent dialogue and provocation but either way, North Korea is continuing its nuclear and missile development. We have no intention of weakening our warning and surveillance.”

Mary J. Blige to get star on Hollywood Walk of Fame