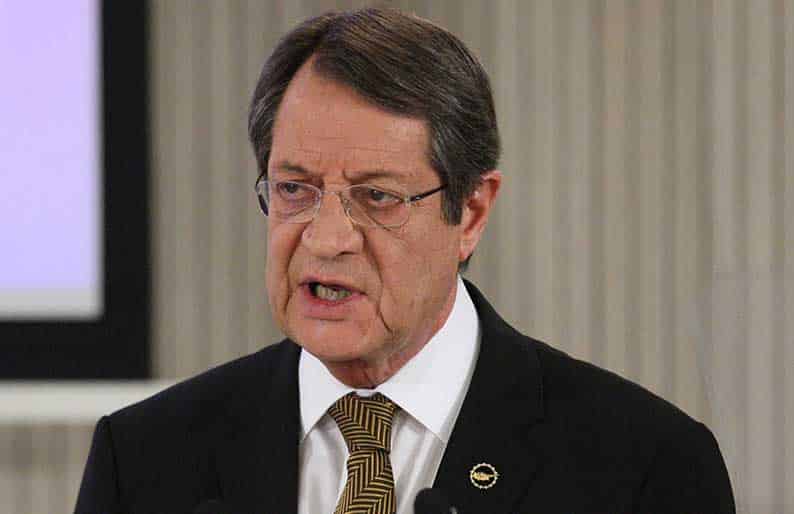 Media reports had said President Anastasiades had travelled on the Saudi businessman’s jet in August 2015, a few months after the Saudi was granted citizenship

Cyprus President Nicos Anastasiades said on Friday the government is trying to mobilise countries that maintain friendly relations with Turkey to exert their influence and help find a negotiated settlement to reunite the country.

Nicosia, the president said, seeks the support of these countries to help Ankara realise that it must abandon its demands – which are not accepted by the Greek Cypriot community and which may ensure the security of one community but constitute a threat for the other – so that a Cyprus settlement can be achieved.

In an interview with the Cyprus News Agency, Anastasiades stressed that achieving a settlement will remain his primary and most important goal if he is re-elected.

Asked if he considers that Greek Cypriots and Turkish Cypriots are ready to accept a bizonal, bicommunal federation as a solution, he said that people will accept a solution that will not favour one community over the other, one that will lead to a functional, viable settlement that will not collapse the next day.

He stressed the need to safeguard human rights and freedoms and also the state’s functionality, to avoid the possibility of it being paralysed and not being able to function.

“If there is a well-established state, and prospects to create conditions for a normal way ahead, for a state that will be functional, those who believe in this state will be able to accept it. However, if it paves the way for something else, then it will not be accepted,” Anastasiades said.

“I believe that in this way a new effort will be able to bear fruit,” Anastasiades said.

He added that the government is exercising a multi-level foreign policy, referring to his meetings with US officials, the Russian president and permanent members of the security council.

On energy concerns and developments regarding drilling operations in Cyprus’ Exclusive Economic Zone, the president said: “One of the most important things that has been achieved is that we have secured our sovereign rights and we have achieved this through our multi-level foreign policy, through alliances with our neighbours and by deepening relations with powerful countries, and through allocating licenses for drilling operations to giant energy companies.”

It was announced this week that Saudi Arabian oil company Saudi Aramco has also expressed interest in doing business in Cyprus’ EEZ.

On the sidelines of Anastasiades’ official visit to Saudi Arabia this week, Energy Minister George Lakkotrypis held meetings with officials from the Saudi ministries of energy and tourism as well as with officials of Saudi Aramco, a worldwide oil giant.

During the meeting, the Saudi Aramco representatives expressed interest in Cyprus because of its stability as an EU member state, geology and perspectives as an energy centre. The two sides agreed to continue the dialogue and explore the most appropriate ways to cooperate.

Author of Trump book contradicts president, says he interviewed him