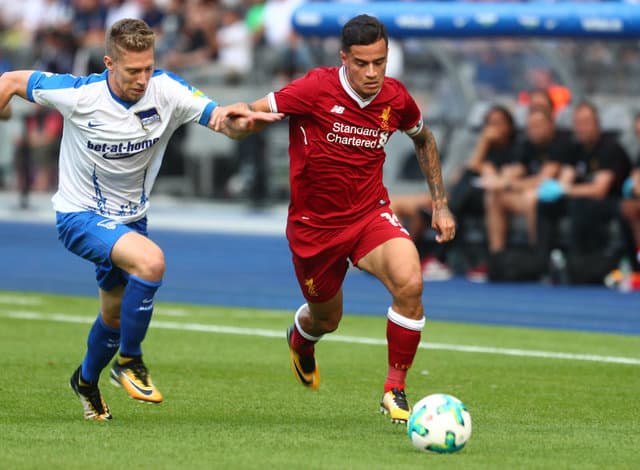 Barcelona will sign Brazil midfielder Philippe Coutinho from Liverpool on a five-and-a-half year contract, the two clubs said on Saturday.

British media reported that the Spanish club will pay about 142 million pounds ($193 million) for Coutinho, making it the third most expensive transfer in soccer history.

“Barcelona and Liverpool have reached an agreement for the transfer of Philippe Coutinho,” the La Liga leaders said in a statement.

“The player will sign a contract for the rest of the season and five more and will have a release clause of 400 million euros.

“Liverpool FC can confirm Philippe Coutinho will be leaving the club after a transfer agreement was reached with FC Barcelona, subject to medical and agreement of personal terms,” the Premier League club said.

“The player now has permission to complete the usual formalities to conclude the transfer immediately.”

Coutinho’s fee will eclipse both the 105 million euros Barca paid Borussia Dortmund for France forward Ousmane Dembele in August and the 75 million pounds ($102) Liverpool received from Barcelona for Luis Suarez in 2014.

Coutinho will be unable to play for Barca in the Champions League this season after taking part in the competition for Liverpool but he will boost their bid for a 25th La Liga title.

Ernesto Valverde’s side have a six-point lead at the top of the standings with a game in hand against Levante on Sunday.

Newspaper AS said Coutinho is expected to attend the match at the Nou Camp in the presidential box.

Liverpool manager Juergen Klopp said the club had tried everything to keep Coutinho at Anfield but the player had remained determined to join Barca since they had bids for him rejected in August.

“It is with great reluctance that we – as a team and club – prepare to say farewell to a good friend, a wonderful person and a fantastic player in Philippe Coutinho,” Klopp said in a statement on Liverpool’s website.

“I can tell the Liverpool supporters that we, as a club, have done everything within our means to convince Philippe that remaining part of LFC was as attractive as moving to Spain, but he is 100 percent certain his future – and that of his family – belongs at Barcelona.

“It is his dream and I am now convinced there is nothing left at our disposal to change his mind.”

Klopp also hinted that Liverpool, who recently signed Virgil van Dijk from Southampton for 75 million pounds, a world record for a defender, would spend the money for Coutinho on new players in the January transfer window.

“I have so much belief in the talent we have here already and even more faith, together with our owners, that we will make continued investment into the playing squad, which will allow more growth and more improvement,” Klopp added.