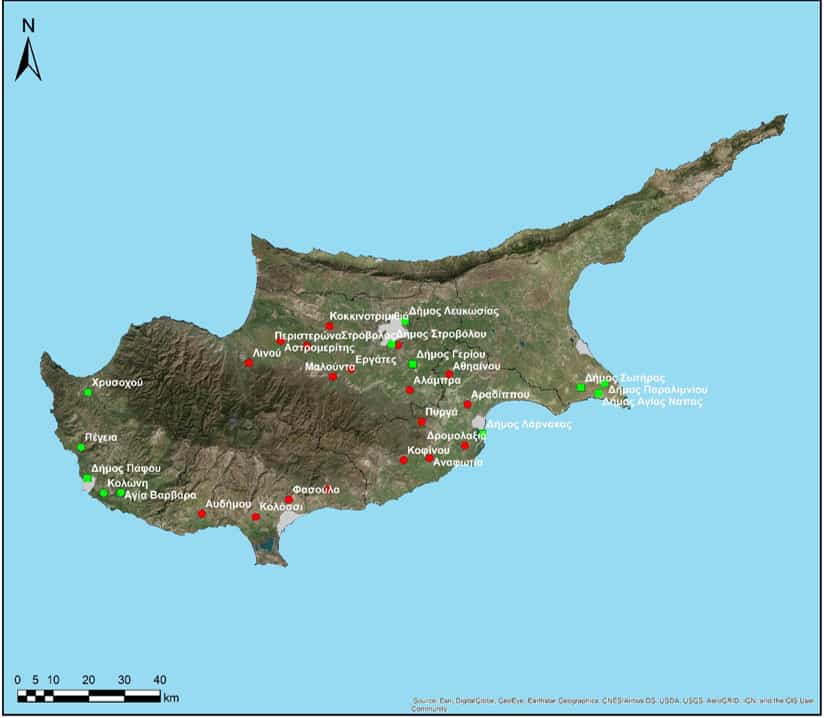 Map showing where the green points are situated

THE ministry of agriculture has advised the public to dispose of green waste and other recyclables responsibly, ahead of the expected opening of 18 new green points across the island.

According to a spokesman for the ministry of agriculture and environment, there are a total 22 Green Points (GPs) over Cyprus which are being constructed by the government. Four in the Paphos district, four in Limassol, six in Larnaca-Famagusta and eight in Nicosia.

“Today only the four GPs in Paphos district are operational. The remaining GPs are expected to be operational by March-May 2018, once the ongoing tendering procedure carried out by the three district solid waste management boards is completed,” the spokesman told the Sunday Mail.

The response comes close to a month after written questions from the Sunday Mail were put to the ministry, concerning protracted delays in the opening of a new green point at Avdimou that have led to piles of garden waste and unwanted household items littering large areas of the countryside, as well as general information about disposal of green waste.

Local authorities of Avdimou have appealed to the minister of the environment to step in.

The ministry confirmed that although the construction of a new GP at Avdimou was completed in February 2017, it is not yet operational.

The spokesman said that delays in opening the facility are because its construction falls within an ‘overall contract’ that covers the staged construction of all four permanent GP’s in the Limassol district, plus one mobile GP, to serve the remoter communities of Limassol.

“The contractor is now in the process of the final handover of the infrastructure to the government. Completion of the handover is anticipated by end of January,” he said.

He added that, in the meantime, the water development department, acting as the technical advisor to all the district solid waste management boards, has recently completed the tender documents for the ‘operation and management of the Green Points in the Limassol District.’

The tender will be launched by the appropriate district body – the solid waste management board of Limassol – in February and the contract award is anticipated in April or May, he said.

Until the sites are up and running the ministry said that residents are encouraged to contact their local authorities, or in the case of Avdimou, the solid waste management board of Limassol district,to arrange for the collection of their green waste and its transportation to the newly operated solid waste mechanical biological treatment (MBT) plant at Pentakomo.

“The responsibility of the collection, disposal and treatment of green waste, as well as other recyclables, lies with the local authorities. That’s why several proceeded with the construction of their own GP to serve their local residents,” he said.

He added that there are currently seven such municipal GP’s, but ‘unfortunately none in the district of Limassol’.

The spokesman also advised that until the GP at Avdimou is finally open, the local authority could examine the possibility of transferring the community green waste to private enterprises that have obtained the necessary permits from the department of the environment for the treatment of green waste.