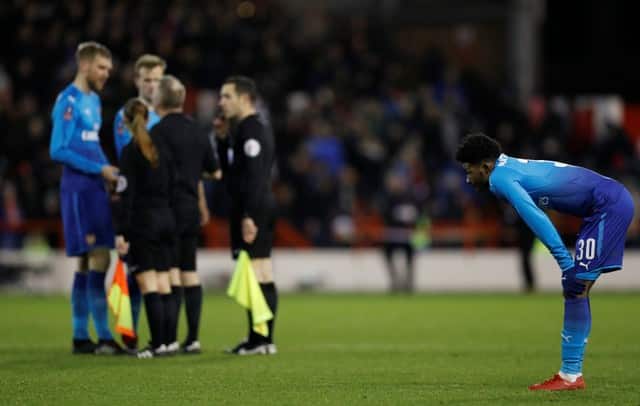 NOTTINGHAM FOREST 4 ARSENAL 2
The Gunners, fielding a much-changed side from the one that drew with Chelsea in midweek and with manager Arsene Wenger watching from the stands because of a touchline ban, trailed 2-1 at halftime as Eric Lichaj scored twice.

Penalties by Ben Brereton and Kieran Dowell sealed victories for Forest who sacked manager Mark Warburton a week ago.

Per Mertesacker had equalised for Arsenal in the first half and Danny Welbeck pulled Arsenal back to 3-2 down with 12 minutes left but the Premier League side could have few complaints at a bitter exit.

A youthful Forest, with seven players aged 23 or under, ended the tie with 10 men after Joe Worrall was shown a red card near the end for a foul on Chuba Akpom.

It did little to detract from the party atmosphere alongside the River Trent though as Forest’s success-starved fans celebrated a rare day of glory.

There were boos from some of the Arsenal fans at the end after watching their side concede four goals to lower league opposition in the FA Cup for the first time since 1908.

It was also Wenger’s first taste of a third round exit.

His decision to play such a weakened line-up — only Rob Holding and Ainsley Maitland-Niles kept their places from the starting side in the impressive 2-2 draw with Chelsea in midweek — quickly began to look like a poor decision.

Lichaj headed in from close range after 20 minutes but the lead lasted only three minutes as Mertesacker finished well when the ball fell to him in the box.

American Lichaj produced a moment of magic to put Forest back in front just before the interval, chesting down before looping a volley over keeper David Ospina.

Teenager Brereton sent Ospina the wrong way from the penalty spot after Rob Holding had fouled Matty Cash in the 64th minute.

Arsenal, missing a host of match-winners including Alexis Sanchez, Mesut Ozil and Aaron Ramsey, were thrown a lifeline with 12 minutes to go when England striker Welbeck punished a mistake by Forest keeper Jordan Smith.

Former Arsenal player Armand Traore was then brought down by Mathieu Debuchy as he surged into the box in the 84th minute as Forest were awarded another penalty.

Dowell converted although Arsenal were furious as it appeared as though he kicked the ball twice after slipping when he was about to strike the spot kick.

NEWPORT 2 LEEDS UNITED 1
Newport County provided the weekend’s second sizeable FA Cup shock as the Welsh club knocked out former winners Leeds United in the third round with a last-gasp 2-1 victory on Sunday.

The fourth-tier outfit bridged a 53-place gap in the standings as substitute Shawn McCoulsky, the day after his 21st birthday, condemned the Championship side to a humbling defeat with a powerful 89th-minute header.

Gaetano Berardi’s deflected ninth-minute strike had looked like winning the tie for Leeds, who were knocked out by minor league Sutton United last season, but Conor Shaughnessy’s own goal 15 minutes from fulltime set up a thrilling climax.

McCoulsky ensured it was one of the best days in modest Newport’s history with an unstoppable header.

“I can’t remember most of it, it was a blur to be honest. It is definitely one of my best goals, to knock Leeds out of the FA Cup is what dreams are made of,” he said.

It is not the first time Leeds have suffered a Cup shock across the other side of the Severn Bridge — having fallen to Cardiff, also 53 places lower than them when they were a Premier League side, in 2002.

To complete a dismal day for Leeds they had substitute Samuel Saiz sent off in stoppage time.

“We were terrible today and Shrewsbury were really good,” West Ham keeper Joe Hart, who began his career at Shrewsbury, said.

“There was some terrible football played today and we lost a lot of battles.”

TOTTENHAM 3 AFC WIMBLEDON
Harry Kane took his goal tally for the season in all competitions to 27 with a quickfire double in Tottenham Hotspur’s 3-0 victory over third-tier AFC Wimbledon in the FA Cup third round at Wembley Stadium on Sunday.

Premier League Tottenham were labouring to break down the visitors before Kane effectively sealed the tie with goals in the 64th and 66th minutes. Jan Vertonghen added his side’s third.

Wimbledon had proved stubborn opposition until a Moussa Sissoko cross found Kane who slid in to prod the ball home.

Kane made it 2-0 when he turned in an attempted shot by team mate Kyle Walker-Peters from close range.

AFC Wimbledon, founded in 2002 to replace the existing club that became Milton Keynes Dons and who have worked their way back up through the various leagues, came close to scoring in the first half when Jimmy Abdou’s shot hit the bar.