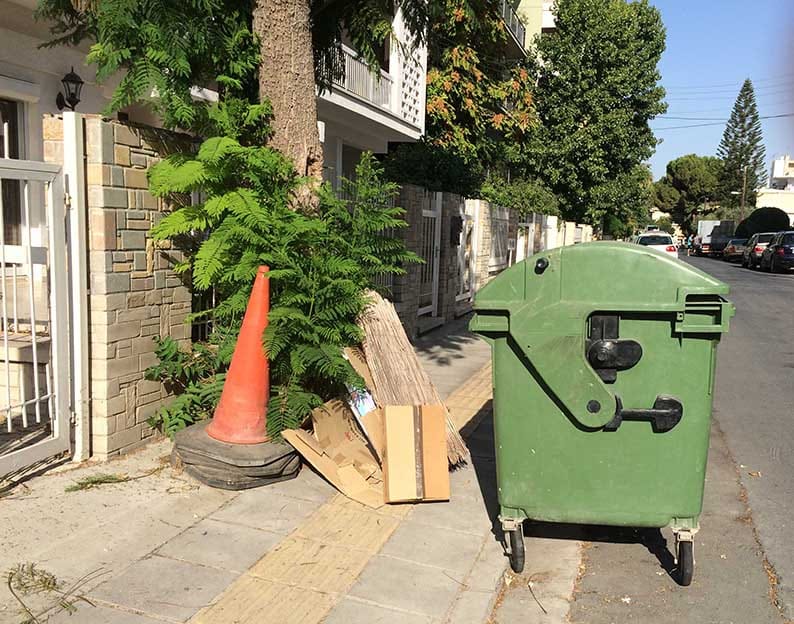 I recently went to take photographs of obstacles on pavements with tactile paving, a system of textured sections of pavements with slight bumps or ridges to guide pedestrians who are visually impaired.

They are not ubiquitous, as in Cyprus they are a recent phenomenon. Seeing one area with these tiles was what made me write this article. Cars were parked on this special pavement as were wheelie bins.  In one such area garden waste was piled up, while tree and bush branches had spread way over garden walls into the street at a height where a person was sure to be injured if they run into them. These many various objects blocking the pavement are bound to stop blind and visually impaired people from setting out for a walk on their own and make a mockery of the textured paving that is supposed to help them.

It was far too easy for me to take photos of these obstacles. For three pictures, it took about a minute and when I travelled on a single small road by car I could have taken another ten or so.

Another problem with the tactile paving is that it is laid only sporadically. It may suddenly stop at a crossing or only part of the road is covered, much like the cycling lanes which don’t connect all parts of the city. But while a cyclist can continue riding a bike on the road, what can an unaccompanied blind person do except ask somebody – if someone is around – for help?

I asked the head of the organisation for the blind how the impaired people move around in Nicosia.

“There are two main obstacles blind people are confronted with,” Christakis Nicolaides head of the association, “one is access to written material and the other is mobility.”

The government needs to have facilities to overcome these obstacles, he said. The first one is to a certain extent provided for, braille helps as do audio CDs and accessible websites which a screen reader can read.

It cannot read PDF files, but websites which use html files like the Cyprus Mail.

“Getting around is more difficult,” he said. “There are different measures but in Cyprus the only one is an allowance. Blind people get €102 per month for taxes and buses.”

Buses are a subject about which a blind person has much to say. “We cannot access the buses. First of all, we can’t find the bus stations, we don’t know where they are. Then if we are on the bus there is no info, no voice to say where we are. We could be at Eleftheria Square or Makarios avenue and we wouldn’t know.”

The subject of taxis is another one. As they are expensive, and a questionnaire revealed there is a great need of transport by car, the blind association suggested the introduction of a service whereby a car is available at certain hours to pick up the disabled and take them at a reduced price, “but of course the taxi drivers didn’t agree.”

In other countries such as Germany where Nicolaides lived for 12 years blind people give a token to taxi drivers who are then reimbursed by the government.

Nicolaides described the example of a resident of Limassol who works in Nicosia. To get to work, she has to take a taxi to get to the Limassol bus station, the bus to Nicosia and another taxi from the bus station there to work. This not only means she starts at 5am, but that each one-way trip costs €30 or €60 a day. This adds up to €1,200 a month, but as she travels every day she now gets a discount and pays ‘merely’ €840.

As for moving around on foot, though this doesn’t cost anything, it seems even more impossible. The pavements are not adequate, Nicolaides reported, giving the example of a big event where new tactile tiles were being celebrated. Just one week later Nicolaides decided to find out how far he could walk.

“After a few metres I came to a place where the municipality itself had placed a sign which was screwed into the tiles,” he told the Sunday Mail. “A bit further there was a patisserie with chairs outside, and then some cars which were parked on the pavement, a number of cars, not just one.”

When he came to a souvlaki place with tables on this special pavement, he gave up.

To explain what could be done, Nicolaides said in other countries there are aids such as hand-held devices which tell you how far it is to your destination and where the entrance to a building is.

The problem is not only the indifference but the lack of education which means there are false assumptions by the government and the public. Many are not even aware of tactile paving, thinking the yellow ridges are simply a way of making the roads better looking and with no other purpose.

Because of the difficulties in navigating long distances, many of the blind live close to the blind school in Nicosia, but even there the municipality is not making an effort to make things easy. According to Nicolaides there are thorny plants which are only infrequently cut back and holes in the road where people who can’t see may well stumble.

The municipality, when contacted, seems willing to help, saying when people contact them to make repairs they respond but they don’t seem to have a separate policy for the visually impaired.

“I can’t give you an answer,” an official of the Strovolos municipality, where the blind school is located, said. “It depends. If you are talking about the pavement it is one person, if it involves other issues it is somebody else.”

As things are, just 10 blind people in the area and some partially blind people try to navigate their way around with a cane without being accompanied by another person.

Changes are unlikely. The association has written countless letters over the years to the government and are constantly requesting meetings with officials, ministers and the president. So far they have received little but promises in return in a country where, as the head of the association says, prejudices and stereotypes are the rule.