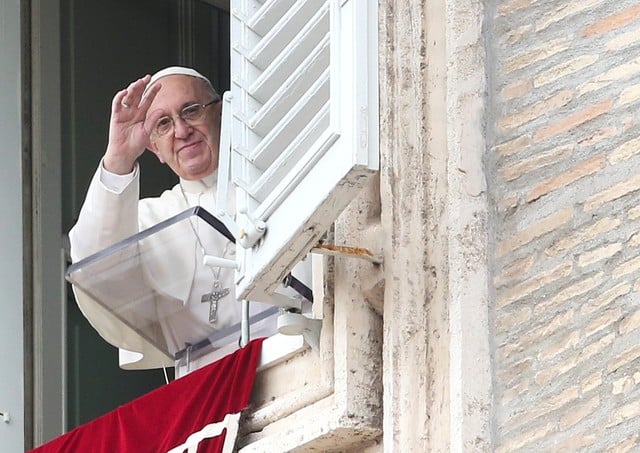 Pope Francis, in his annual “state of the world” address called on Monday for all nations to support dialogue to ease tensions on the Korean peninsula and to work for a legally binding ban on nuclear weapons.

In the speech, Francis also repeated his call for a two-state-solution between Israelis and Palestinians and respect for the “status quo” of Jerusalem following US President Donald Trump’s decision to recognise the city as Israel’s capital.

“It is of paramount importance to support every effort at dialogue on the Korean peninsula, in order to find new ways of overcoming the current disputes, increasing mutual trust and ensuring a peaceful future for the Korean people and the entire world,” Francis said.

The pope addressed envoys from more than 180 countries a day before North Korea and South Korea are due to hold talks expected to address North Korea’s participation in the Pyeongchang Winter Olympics, which some diplomats see as a possible opening for discussions on other topics such as humanitarian issues and divided families.

Earlier this month, after North Korean leader Kim Jong Un asserted that he had a nuclear button at the ready, Trump tweeted that the US button was bigger and more powerful.

“Nuclear weapons must be banned,” Francis said, quoting a document issued by Pope John XXIII at the height of the Cold War and adding that there is “no denying that the conflagration could be started by some chance and unforeseen circumstance”.

Noting that the Holy See was among 122 states that last year agreed a United Nations treaty to ban nuclear weapons, he called for a “serene and wide-ranging debate” on disarmament.

The United States, Britain, France and others boycotted the talks that led to the treaty, instead pledging commitment to a decades-old Non-Proliferation Treaty.

At the individual greetings after the speech, Francis spent more time chatting with South Korea’s envoy, Jonghyu Jeong, than with most other diplomats.

Washington’s new ambassador to the Vatican, Callista Gingrich, attended along with her husband, former speaker of the US House of Representatives, Newt Gingrich.

Addressing climate change, Francis called for a “united effort” to remain committed to the 2015 Paris accord on reducing carbon emissions. French President Emmanuel Macron is trying to breathe new life in the agreement after Trump announced that the United States would withdraw.

Francis, who has made defence of migrants and refugees a major plank of his pontificate, warned against “stirring up primal fears” of newcomers.

“There is a need, then, to abandon the familiar rhetoric and start from the essential consideration that we are dealing, above all, with persons,” he said.

Migration has become a top political issue in countries including the United States, Italy and Germany.

Ballet and paintings tell our most epic stories

First ratings test for the Cypriot economy on February 2