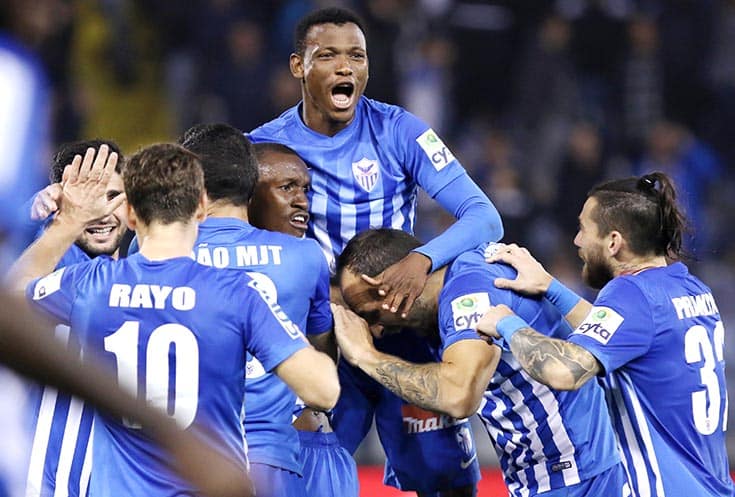 Anorthosis moved to the top of the table following their deserved 3-1 win over AEK in the weekend’s big game involving the championship’s leading two. Apoel recorded another easy win against Alki and are just one point off the top with a couple of games in hand.

Despite falling behind to a Joan Tomas goal as early as the third minute, Anorthosis staged an impressive comeback in the second half to score three times and leapfrog over AEK at the top of the table.

AEK were well worth their lead in the first half as they dominated play and could have added to Tomas’ early strike had their leading scorer Florian Taulemmeuse been more clinical in front of goal.

However, as it so often happens in football when you do not take your chances, it comes back to haunt you.

Anorthosis captain Joao Victor set off his team’s comeback trail with a simple tap in at the far post shortly after the break. Gadzhev doubled the score in the 74th minute and with AEK stretched at the back in search of the equaliser, Cisse broke clear and confidently beat goalkeeper Pablo for the third, a minute from the end to send a packed Antonis Papadopoulos stadium into a frenzy of celebrations.

Apoel continued their impressive run registering yet another easy win, this time against Alki.

The game as a contest was over by half-time as Apoel raced into a 4-0 lead with Lorenzo Ebecilio setting them on their way inside the first 10 minutes. Captain Nuno Morais, who completed 300 league appearances for Apoel, celebrated by scoring the second from the penalty spot.

Hungarian youngster Roland Salay and Belgian Igor de Camargo completed the rout for Apoel who have now won nine of their last ten games, dropping just 2 points in that infamous game against AEL in December.

Despite creating a host of chances Apollon were unable to beat Nea Salamina’s goalkeeper Robert Veselovsky and had to settle for a point at the Ammochostos stadium.

Nea Salamina could have sneaked it right at the end but Eloudou opted for a long range strike instead of rolling the ball into the path of Mintikkis who would have had a clear run on goal.

Omonia almost threw away 2 points as they let a two-goal lead against Olympiakos slip in the final minutes of the game before Matt Derbyshire headed in the winner in the 6th minute of added time.

Lopes and Antonia had given Omonia what seemed to be an unassailable lead in the first half, but Kapartis and Pollici restored parity for Olympiakos in the 90th and 91st minute before Derbyshire’s winner.

In the two other weekend games the home sides ran out comfortable winners, with Ermis defeating Pafos FC by 2-0 and AEL overcoming bottom of the league Ethnikos Achnas by 3-0. This was AEL’s first win in five games.

Under fire, Bannon backs off comments about Trump’s son

Over 800 speeders caught during the weekend