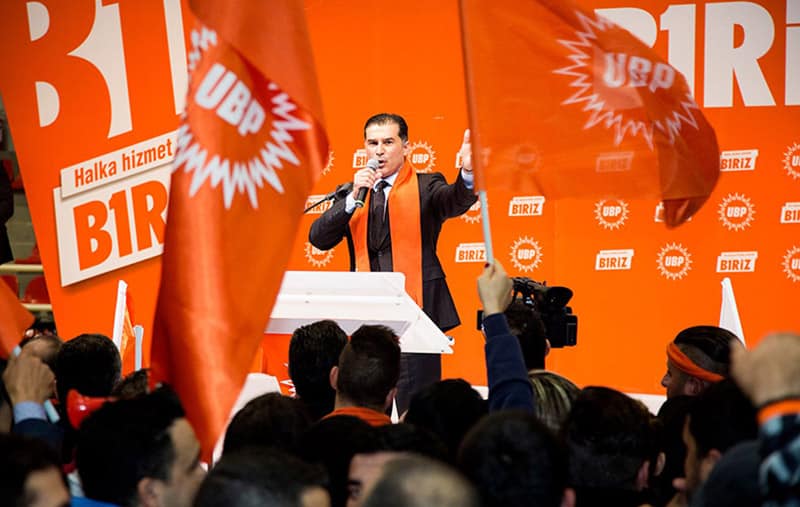 The National Unity Party (UBP) took first place in the elections in the north on Sunday, but failed to win a majority making some form of a coalition arrangement all but inevitable.

The Communal Democracy Party (TDP) managed 8.65 per cent (3 seats), the Democratic Party (DP) won 7.84 per cent (two seats), while the Rebirth Party (YDP) on just 7 per cent got three seats because of the multiple voting system.

In an election dominated by allegations of corruption, bribery and cronyism, many voters appeared to have lost faith in the ability of their leaders to represent their interests. This was reflected in the poor turnout which dropped from 69.41 per cent to 66.2 per cent.

Notably, the Cyprus problem was relegated to the sidelines as parties chose to base their election campaigns on tackling day-to-day issues. CTP – historically a party that has forcefully advocated a solution to the Cyprus problem – chose to focus on changing the ‘rotten’ status quo.”

But speaking after it was clear his party had clinched first place, UBP leader Huseyin Ozgurgun said the people had given the party a mandate. He said the UBP’s goal is to gain an even higher level of prosperity and to ensure the protection of the Turkish Cypriot people.

Ozgurgun, who was congratulated by Turkish President Recep Tayyip Erdogan on Monday, also said the UBP “had always made the best coalition governments”, adding that the future of Turkish Cypriots would be “open and bright”.

Turkish Cypriot leader Mustafa Akinci also congratulated Ozgurgun on his party’s success on Monday and made phone calls to the other party leaders.

Responding to a question on how the election results will affect the stalled Cyprus talks, Akinci pointed out that he was an “independent president” and that he didn’t support any side due to his status.

The Republican Turkish Party saw a large drop in its share of the vote, 17.5 percentage points less compared to the elections in 2013.

In the 28 July 2013 election Ozkan Yorgancioglu and his Republican Turkish Party saw victory with 38 per cent of the vote and 21 seats.

CTP party leader Tufan Erhurman said on Sunday he didn’t think his party would approve a coalition agreement with the UBP.

Former chief negotiator Kudret Ozersay’s new People’s Party (HP) surprised many with its share of the vote and again vowed not to “be a partner of the status quo” ruling out a forming a coalition with the UBP.

Expressing his disappointment over the results, Ozersay said on Monday the majority of voters opted for the continuation of the status quo “despite the continued unlawfulness, irregularities and unethical practices”.

After a meeting of the party’s hierarchy, Ozersay did however leave open the possibility of partnering up with DP “depending on the aims of that potential coalition”.

Serdar Denktash’s DP, who are partners to the current ‘government’, suffered a huge drop only managing to get 7.84 per cent of the vote with two seats, down from 23 per cent and 12 seats in 2013.

“I don’t think we deserved this result but we will look to the future and carry on fighting,” Denktash said on Sunday.

Rebirth Party chairman Erhan Arikli hailed his party’s work ethic and said their efforts led to them overcoming the five per cent threshold to getting into ‘parliament’. Arikli added that he thought a three-way coalition agreement was likely.

The Rebirth Party is mainly composed of Turkish settlers and looks to keep close relations with Turkey.

A quick assessment of the results indicates a nationalist three-way coalition the most likely. UBP’s 21, DP’s two and YDP’s three seats would give the three parties 26 seats from an overall 50 in ‘parliament’.

Another possible, but unlikely arrangement is a CTP, HP, TDP and DP coalition also giving the parties 26 seats. If the parties fail to agree a deal, fresh elections could also be on the table.

Alluding to the unstable nature of coalitions in the north, AKP MP Burhan Kuzu from Turkey suggested replacing the current system with a ‘presidential’ one. There has been debate among the Turkish Cypriots in recent months on the potential merits of following Turkey’s lead in replacing the political system.

There have been three coalitions in north in the last four years.

Akinci will meet the party leaders separately and start the process of forming a new government after the final results are published in the ‘official’ gazette.