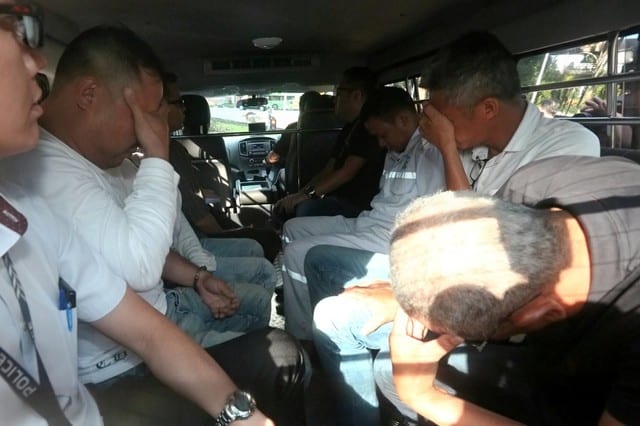 Suspects, part of a group of 17 detained over their part in an alleged oil theft at Shell's Pulau Bukom refinery, arrive in a van at the State Courts, Singapore

Eleven men were charged in a Singapore court on Tuesday in connection with a large-scale oil theft at Shell’s biggest refinery, while police said they were investigating six other men arrested in a weekend raid.

Police in the island-state said on Tuesday they had detained 17 men, whose ages ranged from 30 to 63, and seized millions of dollars in cash and a small tanker during their investigations into theft at the Pulau Bukom industrial site, which sits just south of Singapore‘s main island.

Oil refining and shipping have contributed significantly to Singapore‘s rising wealth during the past decades. But the case underlines the challenges the industry faces in a region that has become a hotspot for illegal oil trading.

The investigation began after Shell contacted the authorities in August 2017, police said in a news release. After “extensive investigations and probes,” the Criminal Investigation Department, Police Intelligence Department and Police Coast Guard launched a series of simultaneous raids acrossSingapore, which led to the arrests.

Nine Singaporeans were immediately charged in the theft, of which eight were employees of the Singapore subsidiary of Royal Dutch Shell Plc, court documents showed. Two Vietnamese nationals were charged with receiving stolen goods on a small tanker named Prime South (IMO: 9452804), the documents showed.

Shell confirmed on Tuesday that eight of the 11 men charged were current or former employees at Shell Eastern Petroleum (Pte) Ltd.

Shipping data from Thomson Reuters Eikon showed the Prime South had been shipping fuel between Ho Chi Minh City, Vietnam, and Singapore for the past 30 days.

Tuesday’s cases could be just the first insight into a grander scheme.

The Vietnamese nationals were charged with receiving gasoil in the early evening hours of Jan. 7, at wharf 5 at the heart of Shell’s operations on Bukom island, the documents show.

During raids on Sunday, police said they seized S$3.05 million in cash and the 12,000-deadweight-tonne tanker. They have also frozen suspects’ bank accounts.

Shell said on Tuesday it anticipated “a short delay” in its supply operations at Bukom, its largest wholly owned refinery in the world in terms of crude distillation capacity. It declined to say the total amount of oil stolen.

It is the second high-profile case of wrongdoing at companies in Singapore to hit headlines in recent weeks, after Keppel Corporation Ltd’s rig-building business agreed in December to pay more than $422 million to resolve charges it bribed Brazilian officials.

Singapore is one of the world’s most important oil trading hubs, with much of the Middle East’s crude oil passing through Singapore before being delivered to the huge consumers in China, Japan and South Korea.

Shell is one of the biggest and longest established foreign investors in Singapore. Its oil refinery on Bukom island can process 500,000 barrels per day.

Illicit oil trading is widespread in Southeast Asia. In some cases, oil has been illegally siphoned from storage tanks, but there have also been thefts at sea, including whole ships being seized for the oil cargo.

The Regional Cooperation Agreement on Combating Piracy and Armed Robbery against Ships in Asia (ReCAAP) says that siphoning of fuel and oil at sea in Asia, including through armed robbery and piracy, saw sharp increases between 2011 and 2015.

There has been a modest decline since then, although the organisation said in a quarterly report that oil theft was still “of concern,” especially in the South China Sea, off the east coast of Malaysia.

The stolen fuel is generally sold across Southeast Asia, offloaded directly into trucks or tanks at small harbours away from oil terminals.

Printing of ballots to be completed on Wednesday