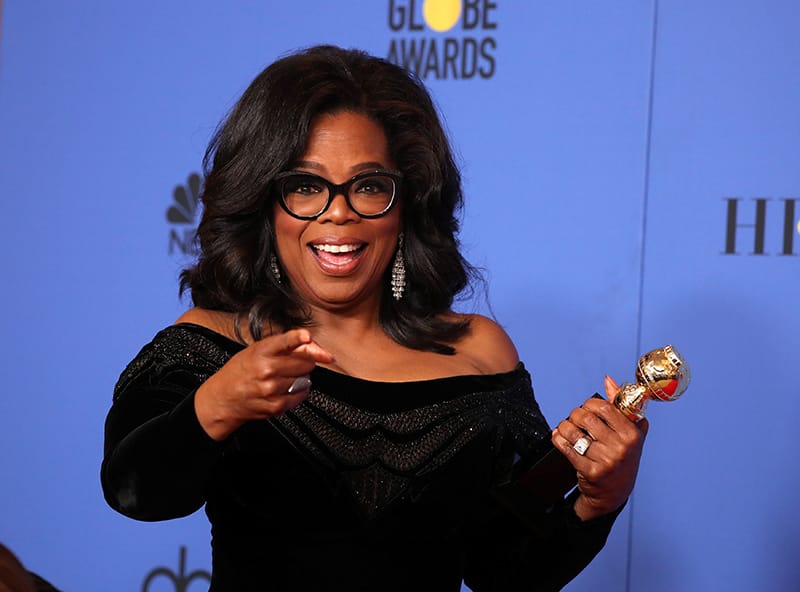 Oprah Winfrey poses backstage with her Cecil B. DeMille Award at the 75th Golden Globe Awards

U.S. President Donald Trump said on Tuesday he could beat Oprah Winfrey in a presidential race, while one of Winfrey’s closest friends said the media mogul and actress was “intrigued” by the possibility of running but was not considering it now.

Speculation about a 2020 White House bid by Winfrey blew up on social media and news outlets after her rousing “new day” speech at the Golden Globes awards show on Sunday night, which touched on female and black empowerment, her roots in poverty and support of those who speak up about sexual abuse and harassment.

But some media commentators also injected skepticism into the surge of excitement among fans of the former talk show star, saying the Democratic Party and the country might well reject the notion of another celebrity political novice following Trump’s 2016 election.

Winfrey, long associated with Democratic politics and fundraising, has not commented publicly on the speculation. Known to millions by her first name, Winfrey, 63, has been a cultural force in the country for decades.

Trump, speaking with reporters during a White House meeting with lawmakers, said in response to a question, “Yeah I’ll beat Oprah. Oprah would be a lot of fun.

“I know her very well. … I like Oprah. I don’t think she’s going to run,” said the Republican president, 71.

Winfrey confidante Gayle King said earlier on Tuesday there was no change in Winfrey’s past position – that she is not interested in running for president.

“I do think she’s intrigued by the idea, I do think that,” King said on the “CBS This Morning” program. “I also know that after years of watching ‘The Oprah (Winfrey) Show’ you always have the right to change your mind. I don’t think at this point she’s actually considering it.”

However, CNN, citing two of Winfrey’s close friends, reported on Monday that the television and movie producer and actress was actively thinking about a White House bid.

Winfrey has raised millions of dollars for various causes, including shelters for battered women but, like Trump when he launched his White House campaign, she has no prior experience in government. Trump, a businessman and former reality TV star, based part of his appeal on the fact he was truly not a Washington insider.

“NOPRAH! Do we really need another celebrity president?” read the front page of Tuesday’s New York Post. A critique in Slate on Monday was headlined “Oprah? Really?,” and bemoaned the “impossibly boring” current crop of major political figures, making people more likely to vote for celebrities like Trump or Winfrey.

Former Trump White House Press Secretary Sean Spicer, who was the public face of some of the Trump administration’s early missteps last year, said on the “Good Morning Britain” show that Winfrey lacked “political infrastructure” and would have a hard time adjusting to the White House.

Winfrey also branched out into acting. She is credited with roles in nearly 30 movie and TV productions, including a role in director Steven Spielberg’s “The Color Purple” that earned her an Oscar nomination for best supporting actress.

More than 300 housing plots to be given to refugees