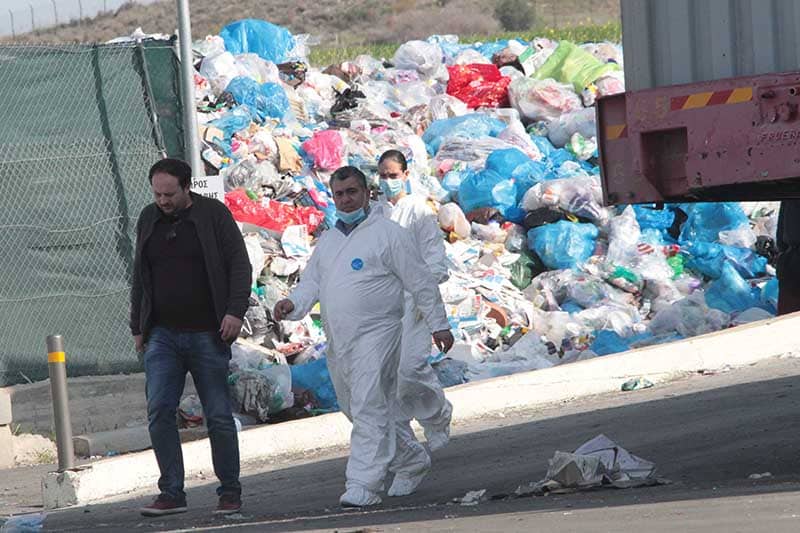 The dead newborn girl found on Tuesday morning, in a rubbish bag at a recycling plant in Yeri, in the Nicosia district was probably alive when it was born, a post mortem revealed on Wednesday.

The post mortem was carried out at Nicosia general hospital by state pathologists Nicholas Charalambous and Angeliki Papetta who were initially called to the scene when the baby was found.

Charalambous said that the infant had injuries which might have been caused after it was placed in the rubbish bag, which was collected by a truck and dropped off, along with the rest of the trash at the recycling plant.

According to Deputy police spokesman Stelios Stylianou it is likely that the collected garbage came from Strovolos or Aglandjia.

Charalambous said the injuries could have resulted from the trucks which picked up the garbage and also by machinery at the plant. “Some samples have been taken for further examinations and DNA testing, and to shed light on the cause of death.”

According to statements Papetta made to CNA, the baby was not stillborn and there was no umbilical cord attached when she was found naked in the rubbish.

“We are still waiting to see if the little girl was thrown into the rubbish alive or dead,” Papetta said, adding that samples were taken from the body for medical and DNA testing, which will be conducted at Nicosia General and the Institute of Neurology and Genetics.

Regarding the injuries sustained by the newborn, Papetta added that the some of the injuries came from the transfer of the body in the rubbish bag, the truck, and the recycling plant.

“At first glance, some things are evident.  But, we are awaiting confirmation from the test results,” she said. The state pathologists also established that the child was of Caucasian ethnicity.

Papetta added that following the tests at the Institute of Neurology and Genetics, they would have access to the child’s DNA and by extension the DNA of the mother and father.  “Therefore, if anyone that could be the child’s parent is found during the police investigation, they will be immediately identified,” she said.

The new born girl is being kept at the morgue at Nicosia General, and she will stay there as long as it is required, Papetta noted, adding that after the results are received, the baby will be given to a church and buried.

The dead baby was found in Yeri in a rubbish bag on the sorting belt at the Yeri recycling plant by a worker around 8am on Tuesday.

Police also called on the public to contact any police station if they have any knowledge which can aid the enquiries.

State health workers on board with expanding working hours

Cyprus honours Gandhi on 150th anniversary of his birth

‘The real facts’ on citizenship scheme are documented, Nouris says