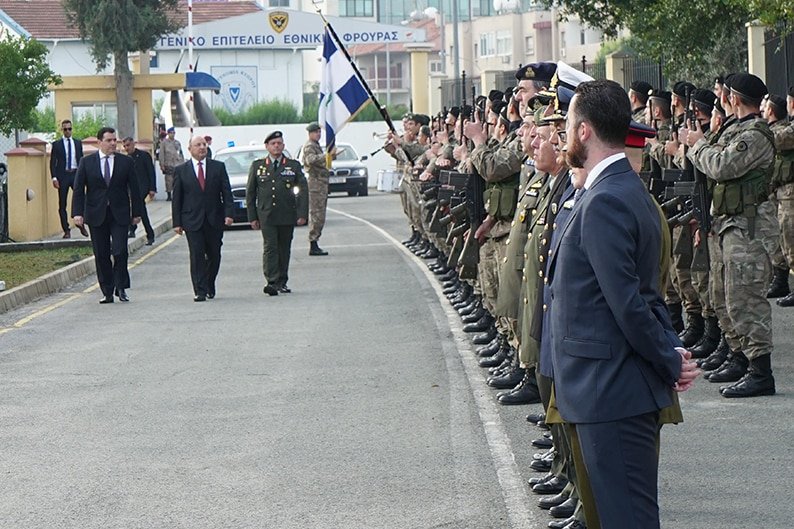 Decisions which set the framework for enhanced cooperation in areas such as maritime cooperation, surveillance in the Mediterranean, research and rescue, counter-terrorism, education and humanitarian operations were taken by the defence ministers of Cyprus and Malta on Wednesday.

The topics were discussed during the first official visit of Defence Minister Michael Farrugia to Cyprus and the first by a Maltese defence minister.

Cyprus and Malta as Mediterranean members of the EU face common challenges and threats and bilateral co-operation is necessary to tackle these problems effectively, the two ministers said after their meeting in Nicosia.

“At the same time as Cyprus and Malta, as two Mediterranean countries facing common challenges and threats, we work together to promote our common interests, our core objective of promoting security, stability and peace… and we work together on various EU programmes,” Defence Minister Christoforos Fokaidis said.

According to the minister, he and his Maltese counterpart in particular discussed the prospect of cooperation between Mediterranean EU member states in the framework of the ‘Med 7′ initiative which is currently being held in Rome at the level of heads of state.

“We will develop a framework for cooperation at the level of defence ministers with meetings at the ministerial level in the near future, a common objective to address challenges such as migration, illicit arms trafficking, proliferation of weapons of mass destruction, terrorism, maritime and energy security ” Fokaidis said.

He also referred to the initiatives of Cyprus in the Eastern Mediterranean regional context with the various neighbouring countries, with trilateral and bilateral partnerships forming a grid of common interests, common policies and common mechanisms that promote stability, security and development, also in view of the significant energy prospects for the Eastern Mediterranean. These prospects, he added, are of strategic importance for the energy future of Europe.

Malta’s Foreign Minister said the talks focused on the situation in the Mediterranean, mainly on the challenges posed by the instability of many parts of the region.

“In this context, we have been discussing illegal immigration, and also the various tragic events that have occurred in EU member states. Malta believes that the citizens’ safety should be at the highest level, both at national and EU level and that the EU must be flexible enough to cater for the needs and circumstances of its member states. Europe must focus on the security and quality of lives of its citizens as threats continue to diversify and multiply,” Farrugia said.

He added his country would continue to press at all European levels to find ways and means of tackling illegal immigration flows.

Farrugia also referred to the possibility of exploring possible opportunities for bilateral co-operation between the armed forces in the areas of research and rescue, training in military academies and joint development in peace operations approved by the EU and the UN.

“Such bilateral ties are useful because they provide the platform to discuss concrete ways for our countries to better co-ordinate and act together in real time on a technical and political level,” he concluded.

California mudslide death toll up to 15 as rescues continue