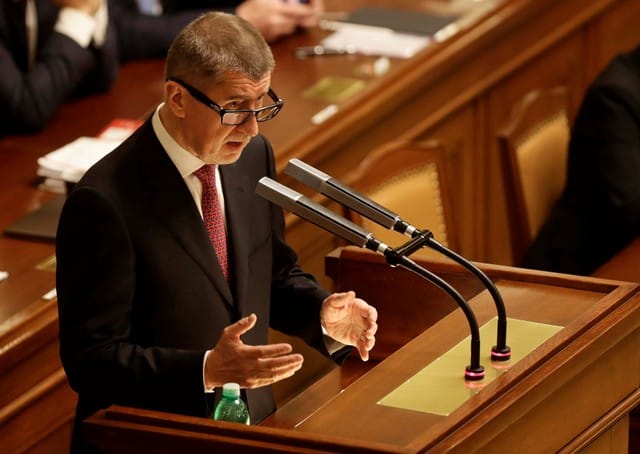 The billionaire’s ANO party won an October election by a wide margin but lacks a majority and has struggled to gain partners, leading it to form a minority government.

If the cabinet, appointed in December, loses the confidence vote it will stay in power until a new one is formed. President Milos Zeman, who appoints prime ministers, has promised to allow Babis another try.

The other eight parties in the lower house of parliament say there are conflicts of interest around Babis, as the founder of a business empire, and have refused to support him while fraud charges are hanging over him. He denies any wrongdoing.

Losing the vote would lead to further weeks or months of political talks. Drawn-out coalition negotiations are becoming more common in European countries, including Germany, as parliaments are increasingly fragmented by the rise of anti-establishment parties.

Babis said he had little hope of success in the parliamentary debate, which got under way on Wednesday morning and was expected to end by the evening.

“We will today ask for confidence, which it is more or less expected that we will not get,” he told reporters before the session.

A new round of government talks would give Babis and his opponents more time to try work out some arrangement that would find majority backing.

The centre-left Social Democrats signalled on Wednesday they would be ready for talks on some form of support, as long as the cabinet does not include people under criminal investigation.

Babis has been charged in the subsidy case but has immunity from prosecution as a member of parliament, unless lawmakers lift this in a vote due in the coming weeks. He says the allegations against him have been fabricated by political and business opponents.

ANO’s convincing election victory – won with promises to shake up politics and fight EU overreach – means any viable government will involve the party, with or without Babis.

The tussle over a new government has not so far troubled investors, long used to shaky coalitions in the central European country, a member of both the EU and NATO.

The economy is growing quickly and unemployment is the lowest in the EU. The country has been running a public sector budget surplus.

The crown currency has been firming and bond yields remain the lowest in central Europe. The crown was steady on Wednesday at 25.560 to the euro.

The country is being sued by the EU executive over its refusal to accept refugees under a quota system, but has so far avoided the kind of heated conflict with the EU embroiling Poland and Hungary.

Babis is the Czech Republic’s second richest person through the Agrofert conglomerate, the country’s biggest private employer, with firms involved in food, farming, chemicals and media. He has transferred its control to a trust fund to meet conflict-of-interest laws.

He is alleged to have concealed the ownership of a farm and conference centre to get a 2 million-euro subsidy earmarked for small businesses when he ran Agrofert.

An investigation by the EU anti-fraud office OLAF has found “irregularities” in the subsidy, the finance ministry said in a statement last week.