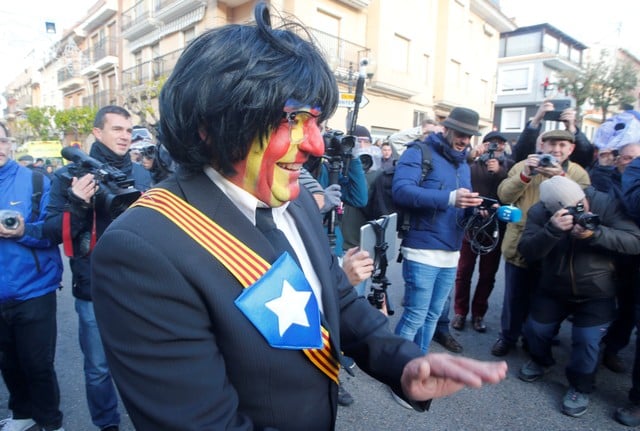 The two main pro-independence parties in the Spanish region of Catalonia have agreed to back former leader Carles Puigdemont as candidate for regional head, raising the likelihood of a renewed push for a split from Spain this year.

However, the party that won the most votes, which supports the unity with Spain, poured scorn on the plan as Puigdemont is in self-imposed exile in Brussels and would be a “hologram president”.

Pro-independence parties achieved a slim majority of seats but they failed to get over 50 percent of the popular vote, bringing no resolution to months of a increasingly bitter impasse.

The political instability in Catalonia, which accounts for a fifth of Spain‘s economy, has deterred tourists and prompted more than 3,000 companies, including the region’s two biggest banks, to move their legal headquarters elsewhere in Spain.

The new Catalan parliament will hold its first session on Jan 17, the first step in reinstating the local government after Madrid fired the old regional administration, led by Puigdemont, for illegally declaring independence.

Pro independence parties Junts per Catalunya (Together for Catalonia) and Esquerra Republicana de Catalunya (ERC)(Republican Left of Catalonia) said on Wednesday they would support Puigdemont’s return to the top job.

However, if Puigdemont is elected leader it is uncertain how he would govern from Brussels. He is likely to be arrested if he returns to Spain where he faces charges of sedition, rebellion and mis-use of public funds.

Ines Arrimadas, the leader of Ciudadanos (Citizens), which favours unity with Spain, said a fugitive from justice could not be a leader in Catalonia.

“You can’t have a hologram president in Catalonia,” she said in a television interview on Tuesday. “You can’t be president of Catalonia from Brussels by Skype,” she said.

Her party won the most votes in December but not enough to form a government.

Once the Catalan parliament is formed, potential leaders of the regional government will put themselves forward for a vote of confidence, although it could take months for a new government to emerge.

Many of the Catalan political leaders were arrested on charges of sedition and rebellion after the independence declaration, with three still behind bars pending a trial, while Puigdemont, with four of his cabinet members, fled to Brussels.

The other main potential candidate to represent the pro-independence parties would be ERC leader Oriol Junqueras, who is serving a custodial sentence in a Madrid jail.

Junqueras has asked for release from jail to attend the first meeting of the new Catalan parliament.

Unemployment rate rises but lower than 2016