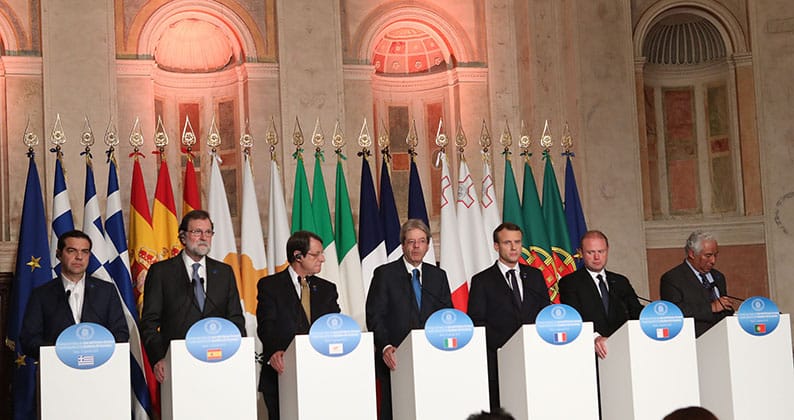 PRESIDENT Nicos Anastasiades was informed on recent discussions between his French counterpart Emmanuel Macron and Turkish President Tayyip Erdogan regarding the Cyprus issue, government spokesman Nicos Christodoulides said on Wednesday, during a press briefing at the 4th Southern EU Countries’ Summit in Rome.

The government spokesman added that the summit was being held ahead of the European Council, set to convene on February 23, and address issues regarding the economic and monetary union, with particular emphasis on employment, development, and investments, which are of particular concern for the EU’s Mediterranean countries.

Following a joint news conference by the leaders of the participating countries, a declaration was issued, where specific reference was made to the Cyprus problem.  “We closely follow and reiterate our support for a viable comprehensive settlement of the Cyprus problem, in line with the UNSC resolutions and the EU acquis, that reunifies Cyprus and its people, and which safeguards Cyprus’ sovereignty, independence and territorial integrity, without guarantees,” it said. “The Republic of Cyprus is and will remain a member of the European Union after the settlement, and EU membership is the best safeguard for a reunified Cyprus.”

In statements following his meetings, Anastasiades said expressed his satisfaction with the understanding of his “friends and counterparts”, regarding the existence and strengthening of a better Europe, “something which is hindered and lessened by the continuation of a European problem, which has continued on unsolved for 44 years.”

“At the same time, we had a chance to discuss European energy security issues, and in that framework, I had the chance to inform the leaders of the developments in Cyprus’ EEZ, the discoveries in the area, which are an important development, and with the creation of the East Med, I believe can offer a sense of security to the EU,” he said.

The president said he also informed the leaders on Turkish violations of Cyprus’ sovereign rights.

Touching on migration, he said the leaders continued to have concerns, regarding migration routes and flows being created based on traffickers’ choices, “which in turn requires vigilance”.

He added that the most important thing was that they reaffirmed that solidarity was needed to support countries on the front lines.

According to the declaration, the next summit is expected to be held in Cyprus.