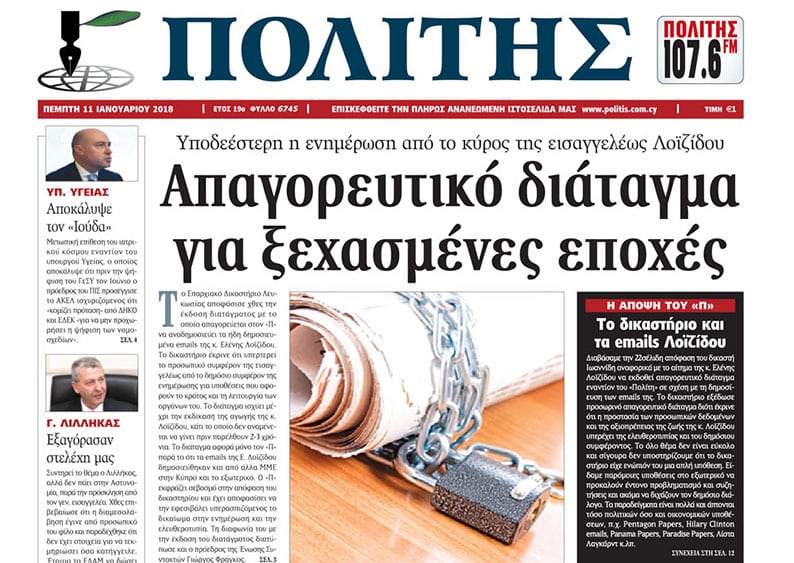 The journalists all work for Politis

AS WE had written here last week, when it comes to personal data protection common sense goes out the window. This principle has become sacred for the courts, which have been known to throw out cases of blatant wrongdoing on the grounds the defendant’s personal data had been violated, in bringing the charges.

This week protection of personal data was used as justification for suppressing freedom of information about matters of public interest, a judge granting an injunction that prohibits Politis newspaper from publishing emails from the account of suspended state attorney Eleni Loizidou, whose private Gmail account was hacked. Some 19,000 emails, mostly relating to official business – she was in charge of extraditions at the state legal service – were posted on the cogroup.brogspot website and were accessible to anyone who visited it.

Bearing this in mind, the injunction against a single newspaper made little sense, as did Judge Ioannides’ decision. Having taken weight both rights – “fundamental right of freedom of speech and the right to privacy,” the Judge decided that “here the right of personality takes precedence, as the issuing of the injunction entails fewer dangers of injustice.” He added that “the continuation of the publication by the defendants of the allegedly stolen emails entails more dangers of injustice.”

The question the judge did not answer was how the injunction would ensure against “more dangers of injustice,” considering that other news media have access to Ms Loizidou’s emails? Other newspapers in Cyprus had published some of the emails, which also found their way into the foreign press, and could carry on doing so. She is not protected with the injunction, if this was its objective.

As for giving precedence to her “right of personality,” it is unjustified in the context of the case. None of the emails published made any reference to Ms Loizidou’s private life, but all related to official matters even if she was using her private email account for these. How a senior state attorney conducts official business with the services of another state is in the public interest. The published emails showed Ms Loizidou’s excessive zeal in pursuing extradition requests against Russian nationals, some politically motivated, by the prosecutor-general of the Russian Federation.

The public has the right to know when a state official behaves like the dutiful employee of another state when conducting the Republic’s business. As President Anastasiades said in reference to the Loizidou affair, “every person that holds a public post could affect the relations or the trustworthiness of the state and must think 10 times how he acts and behaves. The behaviour of this attorney put us in a very difficult position.”

In this context, the injunction seems designed not to protect the personality of a state attorney, but to cover up her unprofessional behaviour that, according to the president put the state “in a very difficult position.”

Greens to push ‘life after culture capital’ for Paphos