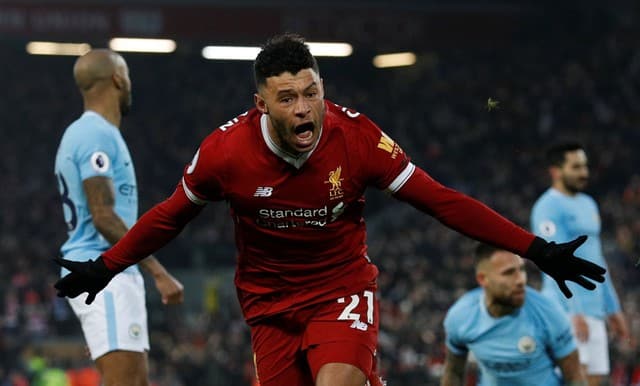 Liverpool scored three times in nine minutes on the way to a dramatic 4-3 win over Manchester City on Sunday which ended the Premier League leaders’ unbeaten start to the season.

Liverpool struck after less than 10 minutes when Alex Oxlade-Chamberlain surged forward from midfield to collect a neat layoff from Roberto Firmino and send a low shot past City keeper Ederson.

Leroy Sane equalised shortly before the interval, but Liverpool blew City away after halftime with Firmino chipping Ederson to restore the home side’s lead and Sadio Mane striking from the edge of the box.

Egypt international Mohamed Salah looked to have completed the rout when he collected Ederson’s clearance and sent the ball sailing back over the stranded keeper’s head, but City substitute Bernardo Silva grabbed one back and midfielder Ilkay Gundogan prodded home in stoppage-time.

City’s first league defeat in 23 games this season left them 15 points clear at the top, ahead of Manchester United, Liverpool and Chelsea.

“The game was in our hands at 1-1 but our finishing was not good and then it went suddenly to 4-1. You have to live this kind of situation in the season.

“The reality is we lose the game, we have a week to recover and prepare for the Newcastle game. All credit to the opponent, we know how difficult it is against a Juergen Klopp team, so aggressive, at Anfield too. We did a good performance apart from a few minutes.

“In every press conference for the last few months you have said that the Premier League is done and I always said no. We will defend our position game by game.”

Against the runaway leaders, Liverpool started strongly at a raucous Anfield and their high pressing game was vindicated when Oxlade-Chamberlain surged forward and finished brilliantly.

In an entertaining match which produced chances at both ends, City began to assert themselves before a deserved equaliser.

Kyle Walker’s brilliant pass beat Joe Gomez and Sane, having controlled the ball superbly with his chest, fizzed a shot past Loris Karius’s weak attempted save at his near post.

The game continued at the same frantic pace after the break with chances for both sides before Liverpool, in one of the most irresistible attacking displays of the season, scored three times in nine blistering minutes.

Firmino lifted a deft finish over Ederson to restore their lead before Mane – just seconds after curling a shot against the post – unleashed an unstoppable drive into the top corner with his left foot.

With Anfield in raptures and the visitors looking shell-shocked, Ederson’s attempted clearance only found Salah who controlled the ball before clipping it over the Brazilian from long range.

Late goals from substitute Silva and Gundogan set up a tense final few minutes but City’s revival came too late.

BOURNEMOUTH 2 ARSENAL 1
Arsenal lost further ground on the Premier League’s top four after struggling Bournemouth came from behind to beat them 2-1 on Sunday.

After Hector Bellerin fired through Asmir Begovic to open the scoring for Arsenal in the 52nd minute, Callum Wilson and Jordon Ibe scored within five second-half minutes to turn the game on its head.

First Wilson converted Ryan Fraser’s teasing cross to restore parity in the 70th minute before Ibe fired home a second having been teed up by the scorer of Bournemouth’s first.

Alexis Sanchez, heavily linked with an exit from the Emirates, was left out of Arsenal’s squad with manager Arsene Wenger saying before the game that a decision on his future was “imminent”.

“It’s a fantastic win because we need to pick up our home form,” man-of-the-match Wilson told Sky Sports.

“The fans were flat so we needed to get them back in the game and a goal against a big team got them on their feet and then we added a second.

“It’s a massive lift. Those points lift us further away from the bottom three.”

Desperate for a win, the visitors started brightly on the south coast with youngster Ainsley Maitland-Niles firing against the crossbar in the eighth minute.

Despite dictating much of the early possession Arsenal clearly missed their more illustrious attacking talents with Alexandre Lacazette cutting a lonely figure without the cutting edge of Sanchez and the injured Mesut Ozil.

Bournemouth grew into the contest before the break and were aggrieved not to receive a penalty when Alex Iwobi appeared to handle Ibe’s cross just moments before a desperate Calum Chambers block kept out Dan Gosling’s goalbound effort.

The break came at the wrong time for the hosts who found themselves behind soon after when Bellerin — set free by a superb Iwobi ball — fired through Begovic’s hand.

But with a much-needed three points there for the taking, Arsenal capitulated against their spirited hosts.

First Petr Cech was unable to cut out Fraser’s teasing cross with Wilson converting before Ibe smashed home after Wilson did brilliantly to tee him up.

In search of a late equaliser, Arsenal brought on Theo Walcott and Aaron Ramsey but they were unable to rescue another desperately disappointing afternoon.

Czech presidential vote to go to second round clash