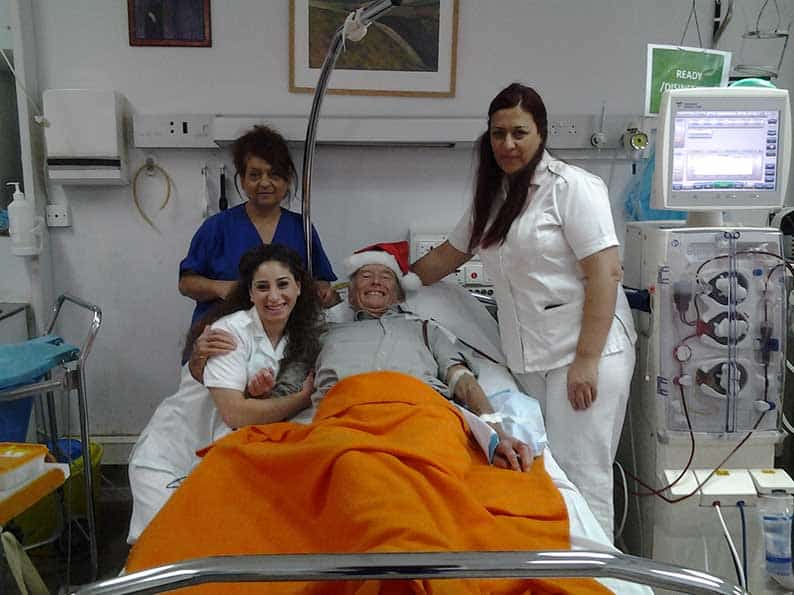 THE first four of 20 new dialysis machines promised by the government are finally operational at Paphos’ renal unit.

The machines went into use at the unit over the Christmas period, according to Graham Brown, the chairman of the Paphos Kidney Association. He told the Sunday Mail that although improvements at the unit are ongoing, much more needs to be done.

“I believe the rest of the machines will be added as and when the current ones, which are very old, break beyond repair. This is a positive move but we need a larger space and more staff,” he said.

Fifteen machines are presently working and are in constant use, catering for the 14 beds at the unit at Paphos general hospital. A further one is situated in the intensive care unit.

Dialysis patients are of all ages and two machines have been specially adapted to cater for children.

According to Dr Lakis Yioukkas, who runs the renal unit, there are currently 75 patients receiving regular dialysis with a further 12 waiting for treatment.

“Every year, the number of patients we see increases by 20 per cent, and last year alone we had fifteen new patients,” he said.

As number of those needing lifesaving dialysis treatment soars, Dr Yioukkas urged people to avoid taking anti-inflammatory medications, as they can cause chronic kidney damage.

“Painkillers and such like are the main reasons behind kidney damage we are seeing, and they are dangerous medications. People should take them with caution and always with medical advice.”

He also advised people to exercise more and eat healthily, which will help to control blood pressure, cholesterol levels and diabetes.

He also stressed the urgent need for a new renal unit along with more doctors – there are currently only two – and more nurses.

“The main problem we are facing is that the haemodialysis unit is too small and also that we have no in-patient kidney clinic at the hospital.”

The doctor said that patients admitted to the hospital currently have to be placed ‘wherever there is a spare bed’ and that they could end up on any of the wards.

“We urgently need a six bed ward dedicated to kidney patients where they can stay, the current situation is not satisfactory at all,” he said.

Brown fully understands the problems facing patients as he has hereditary polycystic kidney disease and receives regular dialysis treatment at the unit to keep him alive. Each of the hemodiafiltration (HDF) units which the charity has recently donated and which the government will now supply, comes with a €25,000 price tag. If a patient doesn’t receive dialysis when needed, they will die within five days.

Brown’s treatments take around four to five hours and he needs them three times a week to keep him alive. It costs around €50,000 to treat each patient a year.

Nurses are currently working many double shifts, he said, four days and nights of the week, due to understaffing and a number on sick leave.

“We have also raised money for a new special machine for those with low blood pressure and this will need three specially trained nurses to operate. Intensive care is examining training them up to be able to use the machine correctly but we can’t do anything to help to pay for this, as specialist training is the responsibility of the government,” he said.

Brown noted that while regular dialysis treatments takes around five hours, patients with low blood pressure can’t use the machines. They need a far gentler treatment, which takes far longer and currently have to travel to Nicosia to use the only machine on the island.

Supporters of the association worked tirelessly in 2017 and raised over 73,000 euros for the renal unit. All sorts of events such a regular quizzes, raffles and generous donations have helped, said Brown. And in 2018, a classical music festival celebrating the music of Bach, in support of the association, organised by Andrew Oliver, is expected to boost the charities income considerably.

The renal unit is reliant on the fundraising of the association and Brown also advises concerned holidaymakers as to the local diet and facilities.

“I often get phone calls from all over the world asking advice about dialysis treatment available and I have also developed a diet sheet specifically for people who are unsure about Cyprus and the food here.”

Brown said that although the government has agreed to build a new renal unit at the hospital and initial steps towards this are underway, he has no idea of its size or how long it will take to build.

The association is constantly trying to upgrade the standards of the ward and ensure that the nurses have what they need to make their working lives better.

Brown said the charity also aims to re-equip the new ward when it’s ready, and recently bought new pillows and pillow cases after nurses were forced to ask patients to bring in their own pillows.

“I am just thankful that I am not one of the people waiting for dialysis,” he said.

Czech presidential vote to go to second round clash